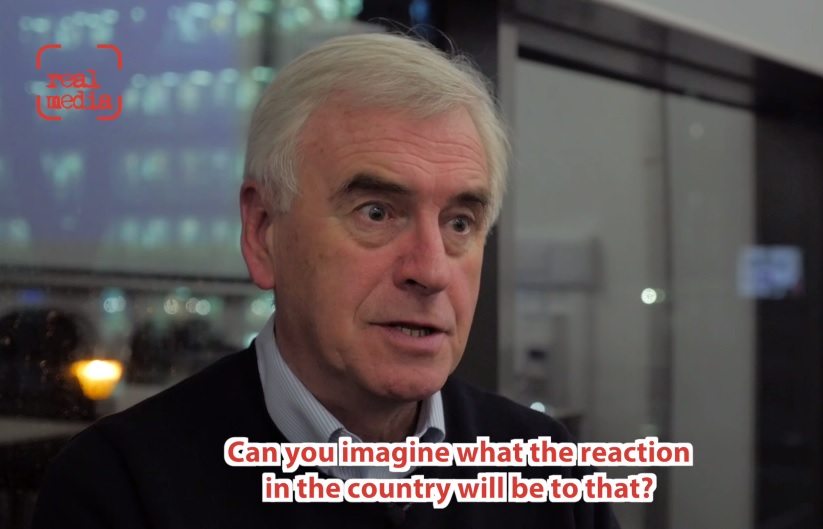 Shadow Chancellor John McDonnell has warned that the government’s latest Brexit brainwave will cause an “uproar” if it goes ahead. He was referring to the Conservative government’s plan to work out a separate deal with the EU for the financial sector.

Essentially, the government is considering whether to bail out the banks from Brexit for a certain length of time. But McDonnell has cautioned that the plan will leave people “furious”.

The Shadow Chancellor and MP for Hayes and Harlington was speaking in an interview with Real Media. Following his appearance at the Media Democracy Festival on 10 December, he told the media cooperative that the Brexit negotiations were “chaotic”.

He also addressed the possibility of a transitional deal for the financial sector. The banking sector is pushing for such a deal, whereby the government uses public money to pay Brussels for its access to the single market, known as ‘passporting‘ rights. McDonnell said:

Can you imagine what the reaction in the country will be to that? If you’re working in the manufacturing sector, or in other service sectors in this country that operate within Europe as well, can you imagine their reaction that here’s the government doing a deal for one sector and not for the rest?

I think there’ll be uproar. The government’s got to be comprehensive in its negotiations. If it has to be sector by sector, it cannot exclude individual sectors and it cannot give preferential treatment.

Bank of England Governor Mark Carney is already planning for such transitional arrangements, according to The Guardian. He has asserted that it is “absolutely desirable” that banks are given more time to restructure after a deal is agreed with the EU.

Chairman of the Treasury Select Committee Andrew Tyrie signalled support for the arrangements on 12 December. He said:

Without an early commitment to them, firms may conclude that they cannot afford to wait, and act pre-emptively to protect their shareholders’ interests

This action could include some cancellation of investment and/or relocation out of the UK, to the detriment of the British economy, and important parts of the financial services industry.

Yet if those arrangements only benefit the financial sector, there could well be anger, as McDonnell has indicated. Since the 2008 financial crash, there has been a heightened public sensitivity over the sector. Its own recklessness and greed caused that crash, while the taxpayer picked up the cheque.

Its greed gave us austerity. So it is highly unlikely the public will leap at the chance to prioritise its protection again. Because, frankly, it has never done the same for us.