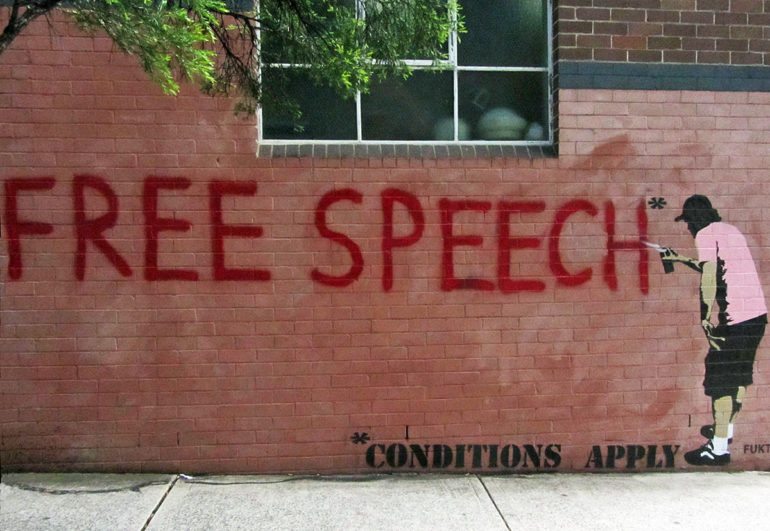 A report released by the Foundation for Individual Rights in Education (FIRE) shows that the number of US universities with ‘red-light’ speech codes that substantially restrict constitutionally protected speech dropped by 10% in the last year. And those that don’t seriously threaten free speech have tripled in number to 27. But 39.6% of universities still adopt these strict speech codes. So while progress is being made in protecting free speech on campus, many institutions still have a lot of catching up to do.

Diversity matters, except when it comes to ideas

FIRE lists a number of cases of free expression being threatened on college campuses.

A play that satirises ethnic stereotypes was cancelled at California State University, Long Beach. “Controversial” student organisations, such as the DePaul Socialists, have been forced to pay security fees based on the content of their expression. And Northern Michigan University has prohibited students from discussing self-harm.

FIRE also coordinated a legal challenge to an unconstitutional free speech zone policy at the University of Cincinnati (UC). UC’s policy restricted all “demonstrations, pickets and rallies” to an area comprising just 0.1% of the university’s campus. And they won the case.

These are just a few of the cases that FIRE is involved with. There are many instances where opposing, divergent, or ‘controversial’ ideas get censored in some way or another. For example, Cal State University, Los Angeles, cancelled a speech by conservative commentator Ben Shapiro after students objected to his appearance.

At an Intelligence Squared debate, 66% of attendees agreed that free speech is threatened on campus. And it’s easy to see why the public at large would think so. After all, a large proportion of students believe it’s acceptable to restrict speech, even when it doesn’t harm or threaten others. For example, a Gallup poll found that 22% of students believed “colleges should prohibit biased or offensive speech in the furtherance of a positive learning environment”.

There are cases of threats to free speech popping up all the time. As previously reported at The Canary, an antisemitism bill could clamp down on protests against the Israeli government.

How colleges get away with it

although acceptance of federal funding does confer some obligations upon private colleges (such as compliance with federal anti-discrimination laws), compliance with the First Amendment is not one of them.

In other words, private schools can discriminate against faculty and students based on their political views, but not gender, ethnicity, religion, disability, or sexual orientation.

In many cases, the supposed right not to be offended is being prioritised over the right to express one’s views.

One reason these institutions can get away with it is that they’re not being legally challenged. But when they are challenged, such as in the cases that FIRE brings forward, free speech wins.

Some institutions, such as Colorado State University, maintain that higher education should be a marketplace of ideas:

…diversity of thought is to be celebrated, and the opportunity to learn, to question and to think both conventionally and unconventionally in a safe and respectful environment is part of the higher education experience.

In a similar vein, the University of Chicago issued a statement on its commitment to principles of free expression. Speech must be restricted if it “violates the law, is threatening, harassing, defamatory or invades privacy or confidentiality interests”. But ultimately:

the University is committed to the principle that it may not restrict debate or deliberation because the ideas put forth are thought to be offensive, unwise, immoral, or wrong-headed.

In the UK, free speech is increasingly at risk on university campuses. It can be difficult to discern when free expression crosses into harassment or other kinds of unlawful speech. But in cases where we are dealing simply with offensive or controversial views, it sets a very dangerous precedent to censor them.