Sickening hypocrisy: how the right-wing press feigns concern at hatred it inspires [TWEETS] - The Canary 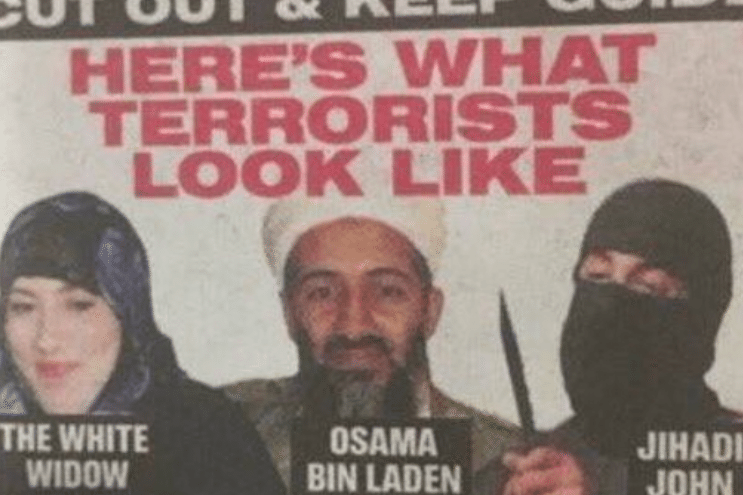 On 12 December, a man with a knife terrorised passengers at Forest Hill station in southeast London, openly shouting that he wanted to “kill me a Muslim”. And yet the right-wing press reporting on the event seemed woefully unaware of its own hypocrisy. Indeed, it is arguably responsible for much of the frenzied anti-Muslim rhetoric and fascist sentiments resurgent in the UK today.

A man in his 40s was stabbed, and taken to hospital with “serious but not life-threatening injuries”. The alleged perpetrator was arrested on account of grievous bodily harm (GBH) by London Transport Police.

The specific words that the attacker shouted have varied slightly in reports, with only The Express making a jump to the plural, alleging it was “I want to kill Muslims”. The Sun and Sky News also reported on his rampage, and how he asked people “who is a Muslim?” before finally attacking his victim.

No longer hiding in the shadows

Hate crimes and xenophobia have spiked in the UK since the Brexit referendum of 23 June. Fascist groups and those with far-right sympathies have been empowered. They no longer hide behind obscurity provided by the internet. The election of Donald Trump in the US only provided them further affirmation. And the UK government is now taking action against some of the worst offenders.

But it was arguably the right-wing press that fuelled this wave of hatred in the first place. And award-winning journalist and broadcaster Mehdi Hasan shone a light on the media’s hypocrisy in a recent tweet:

Two headlines in today's Telegraph. Worth reading them side by side. #justsaying #ForestHillStabbing pic.twitter.com/l64XZRnMDo

The tabloid press, meanwhile, is even worse, running with headlines from the likes of Katie Hopkins that speak of turning gunships on refugees. Or handy cut-outs to help you identify what terrorists look like:

Abhorrent from The Sun 'This is what terrorists look like' https://t.co/j98RUsJgGL

But even the more carefully phrased attitudes of The Telegraph still feed into the idea that Muslims in Britain are a ‘danger lurking beneath the surface’. And The Times has published sensationalist [paywall] headlines about all-Muslim enclaves. In fact, even liberal publications like The Guardian sometimes focus attention on the increase of the Muslim population. Tabloids such as The Daily Mail and The Sun, meanwhile, seem to exploit such figures to spread as much fear as possible.

In reality, the number of Muslims in the UK is only about 5% of the population.

Backlash against the right-wing press

A 2016 YouGov poll suggested the British press is the most right-wing in Europe.

Campaigns such as Stop Funding Hate have gathered momentum in recent weeks. Large consumer-driven companies have come under pressure to no longer advertise with organisations touting divisive rhetoric and prejudice. The Daily Beast recently reported on the organisation’s backlash against the prevalence of UK tabloid xenophobia, and its calling out of the retailer John Lewis. It described the John Lewis commercial as the “big daddy of the lachrymose but heart-warming Christmas advert”. Its advert may have tugged at heart-strings of acceptance and inclusion, but Stop Funding Hate pointed out the hypocrisy by asking it to end its support of The Express. A publication that frequently deluges its readers with prejudicial onslaughts such as these:

Pls share if you agree that #Freespeech does not require @johnlewisretail to fund hateful & discriminatory headlines #HumanRightsDay pic.twitter.com/BBdMEqSumO

The murder of Jo Cox: a wake-up call?

In the days leading up to the Brexit vote, far-right terrorist Thomas Mair murdered Labour MP Jo Cox. He shot and stabbed the staunch supporter of inclusion and multiculturalism and said “death to traitors, freedom for Britain”.

Many journalists and writers have raised the question of double standards. White murderers like Mair are described as “gunmen” or “mentally-ill”. Their crimes are deliberately diminished, and made to seem less threatening to the populace. But minority groups (particularly from an Islamic or Middle Eastern background) are nearly always described as “terrorists”. And the very definition of ‘terrorism’ implies an indiscriminate threat to wider society. In the US, however, where citizens are statistically far more likely to be killed by gun violence, Caucasian and right-wing gunmen are almost never described as such.

London Transport Police specifically stated the stabbing in Forest Hill was being treated as a hate crime, not an act of terrorism. Whether or not it would have been portrayed as such by the tabloid press had it been a Muslim shouting for the death of Christians is a very different question.

If you still harbor doubts about whether the term "terrorism" has been fixed only to a certain religious minority, then doubt no more. pic.twitter.com/BxLqOB5bJL

The husband and widower of Jo Cox had his own view on the stabbing in Forest Hill:

I have a feeling this may be running higher in the news if this were a Muslim saying he wanted to stab Christians. https://t.co/cylJZXMfQ9

And he makes a fair point. Given his personal loss, it is quite understandable that he seeks greater recognition for the threat posed by a resurgent far right. And continuing in the spirit of his late wife’s campaign, he calls for religious minorities not to be unfairly vilified.

UK citizens should be acutely aware of the hypocrisy. Right-wing newspapers feign concern at right-wing acts of violence, when hatred and vengeance against religious minorities is exactly what they’ve spent vast resources trying to whip up.

They’re taking their readers for fools.