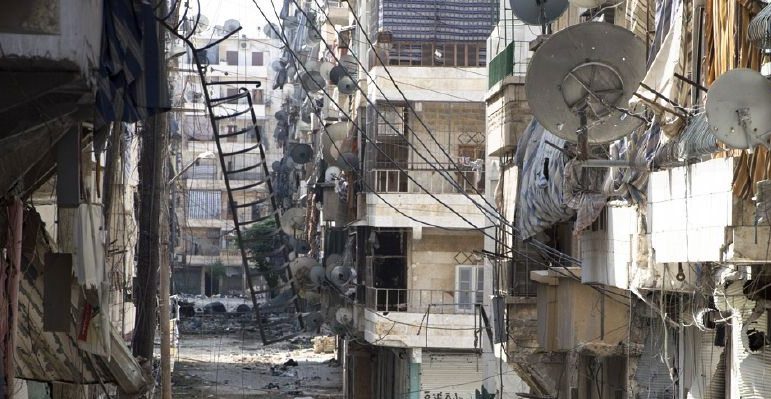 The battle for eastern Aleppo is coming to an end, after over four years of fighting. And as it ends, the ‘good guys vs bad guys’ narrative of many international media outlets is just as misleading as ever.

The end of a bloody and destructive battle

On 13 December, Russian ambassador to the UN Vitaly Churkin said the Syrian government controlled the last areas of the city under ‘rebel’ rule. A Turkish-Russian-brokered arrangement had apparently allowed anti-Assad fighters to leave the city.

The Mirror saw this as a “tragedy“. For The Independent, it was a “day of horror“. And rebels had “fought fiercely“, only surrendering to protect civilians, according to The Telegraph.

During the government’s assault on eastern Aleppo, there were numerous reports of chlorine gas usage. And Human Rights Watch (HRW) accused both the Russian and Syrian governments of committing other war crimes, too. It said they had used disproportionate and indiscriminate force to attack rebel-held areas. And as the battle came to an end, there were reports of pro-Assad forces killing civilians, and of the ceasefire stalling.

But Bashar al-Assad’s opponents have also been responsible for civilian deaths and human rights abuses. According to one report from December 2015, around 60% of them had similar views to Daesh (Isis/Isil). In fact, leaked reports suggest that US intelligence agencies were fully aware that Salafi/Wahhabi groups like al-Qaeda were “the major forces driving the insurgency” from early on. And US/UK covert action went ahead regardless.

Former al-Qaeda affiliate Jabhat al-Nusra (now Jabhat Fatah al-Sham) reportedly received weapons from the US, and has committed numerous human rights violations in areas under its control. The once US-backed Zenki group, meanwhile, has apparently beheaded children. But Western news outlets have underplayed the role of jihadis in the fight against Assad, and have called groups like Zenki “moderates” even after these events.

HRW and others have consistently expressed concern about the wellbeing of civilians trapped in Aleppo. And hundreds of civilians have reportedly died in the battle. But the government is not the only culprit.

Kurdish forces in Sheikh Maqsoud still offered shelter or safe passage to civilians fleeing eastern Aleppo. But according to one report, rebels fired on potential refugees to stop them leaving.

The UN, meanwhile, has long been aware of the impact of the Syrian conflict on civilians. One leaked report from May 2016 claimed that international sanctions were harming ordinary civilians the most. And UN Emergency Relief Coordinator Stephen O’Brien told the UN Security Council in November that it was “never too soon for you to find a solution to this conflict and end the suffering of the Syrian people”. But speaking about the worsening crisis in Aleppo, and the failure to stop it, he said: “shame on us all”.

The media’s ‘good vs evil’ narrative

In this environment, nuance might dictate that neither Assad nor his jihadi-led opponents are the saviours of Syria. Or that a peaceful political solution must be found, and soon.

But Western media outlets have too often told a ‘good guys against bad guys’ story.

Comparing Aleppo and Stalingrad has been particularly popular. The latter was home to a World War II turning point. Nazis attacked the city, but Soviet forces dug in and won. It was a massive defeat for fascism. In 2014, meanwhile, when rebels in Aleppo had the upper hand, America’s The National Interest seemed to suggest that they were the Soviets delivering defeat to Assad’s fascists. And the metaphor has played both ways. Russia’s US embassy, for example, insisted in October 2016 that the opposite was true. For them, the jihadi-led rebels were the Nazis.

Another popular comparison has been between Aleppo and Guernica. The latter being the Spanish town where Nazis backed Francisco Franco’s nationalists in 1937 by bombing a bastion of left-wing resistance. This time, it was a victory for fascism. And in recent weeks, The Guardian, The Independent, The New Yorker, and others have all gone for this metaphor. Syria’s rebels, presumably, were the Spanish left-wingers.

Multi-award winning journalist Robert Fisk was one of the only voices to break through the media noise seemingly portraying anti-Assad rebels as ‘the good guys’. He said:

we have been wilfully ignoring the behaviour of the rebels of Aleppo… Remember the War on Terror? Remember the “pure evil” of al-Qaeda… Not when the rebels, including al-Qaeda, were bravely defending east Aleppo, we didn’t – because a powerful tale of heroism, democracy and suffering was being woven for us, a narrative of good guys versus bad guys as explosive and dishonest as “weapons of mass destruction”.

True, some Syrian rebels are not jihadis. And Kurdish-led forces in northern Syria definitely aren’t. But it was always dishonest and misleading for the Western media to portray the opposition in eastern Aleppo as heroes. In reality, both they and Assad have blood on their hands. And it’s innocent people who have suffered the most as their conflict rumbles on.

Aleppo was neither Stalingrad nor Guernica. It was just Aleppo. It was another of many bloody battles throughout human history. Another arena of death and destruction. Another low point for diplomacy. And another reason for international governments to come together to foster a peaceful resolution to a war still raging in Syria after five devastating years.

– Read more Canary articles on Syria and Rojava (the democratic and multicultural communities in northern Syria which have refused to join both Assad and his jihadi-led opponents).

– Write to Theresa May and your MP. Ask them to urge the international community to make finding a peaceful political solution to the Syrian civil war its top priority.

– See our series of articles from the ground in Syria.