The far right claims there's a 'white genocide', and it's even more ridiculous than you'd expect [OPINION] - Canary 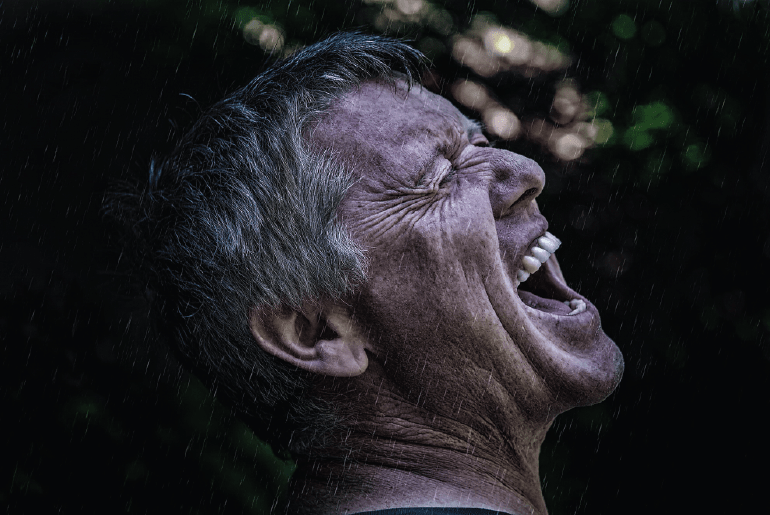 The hotbed of confusion and hatred that is the far right has vomited up some weird ideas. And perhaps the weirdest of all is the idea of ‘white genocide’. That is, the notion that white people are being wiped out. Not in the regular fashion, however, but by means of things like:

So basically, it’s just old-fashioned racism that’s been dressed up a bit. In a way, it’s similar to the idea of ‘creationism‘. Because what they’ve done is taken something ridiculous/discredited and tried to justify it by giving it a new name and some convoluted ‘logic’.

So what is it again?

One of the most common messages from these people is ‘diversity = white genocide’. The people running the WHITE GENOCIDE INFO account even made that message into their Twitter banner:

Firstly, we need to address the Christmas tree. Christmas is a mixture of pagan festivals from northern Europe and the birth of Jesus Christ in the Middle East. Jesus was possibly even more ‘foreign’ than that too, if the stories of his parentage are to be believed. All of which makes Christmas the very pinnacle of diversity. And as such, we’ll probably never understand why they chose to include a Christmas tree in this image. Even if we get our best minds together, and ask them to think about it really, really hard.

But getting back to their main point, how will diversity or multiculturalism lead to ‘white genocide’? Here’s the Twitter user STOP #WHITEGENOCIDE to explain:

So what’s happening here then? It could be implying that immigration and higher reproduction rates mean that white people will become a minority. Some suggest that is looking to be the case in both Britain and the United States. But who cares? Other than people who see people of colour as being different or wrong? I.e. people who are racist. An accusation which we could easily level against the creator of this meme. An author who fears that his family will ‘die out’ as soon as people of colour reach some sort of critical mass. Because obviously their bad genes will make them carry out some sort of white holocaust. A holocaust which will apparently be a lot groovier than past ones if the dancing stick men are anything to go by.

The other explanation for how white people will be wiped out is through people of different ethnicities mixing. Not forcibly, though. But as a result of consenting adults choosing to form relationships with one another and have children. Which is obviously scandalous, as who are they to form relationships that go against the wishes of anonymous losers who’d rather they didn’t?

The term they often use for mixed-heritage coupling is ‘miscegenation’. And the disgust that they show for such mixed-heritage people is readily available. A disgust which once more shows their white supremacy in a clear light.

It’s a ludicrous argument that seems to suggest that genetic whiteness is the only element that’s changed as a result of interaction between people of different ethnicities. In reality, when people of two heritages have a child, their offspring is a mixture of both heritages. Unless that is you’re a white supremacist who won’t settle for anything other than ‘purity’, in which case the child is an abomination. Again, this is clearly just a rehash of the ideas of every white supremacist ever – from Hitler to the Ku Klux Klan.

The other aspect of this frailty is the idea that what’s happening is in any way a ‘genocide’. Because most genocides involve the systematic murder of entire populations. Whereas white genocide can apparently happen as a result of young women in headscarves winning baking competitions. As can be seen in this response to an article from The Telegraph about The Great British Bake Off: 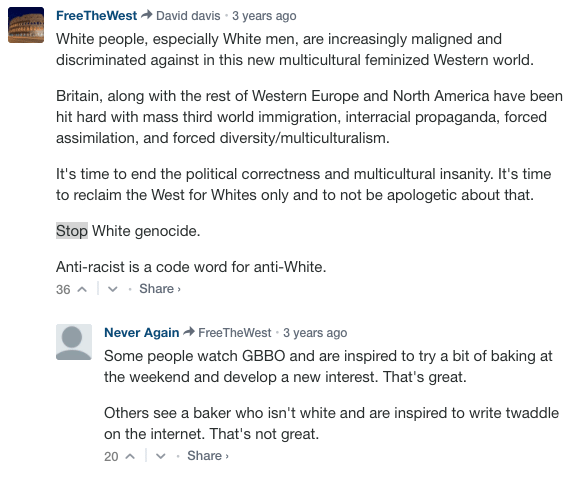 What else have they got up their sleeves?

Many more confused and confusing arguments:

A white child being educated in a classroom with other children is not a ‘human rights’ violation. There is no basic human right to apartheid.

The idea that any white person who isn’t racist must secretly hate white people is commonly thrown around. Which is nonsense, because I’m fine with the vast majority of white people. I’m basically just at odds with the ones who are in some way scumbags. Like racists, for example.

My opinion is that racists feel like they have the right to speak for all white people because they’re obsessed with whiteness to the point that they think they own it. Kind of like a snooty wine critic explaining that you don’t understand champagne because you only drink the stuff rather than tediously obsessing over it like a weirdo.

Hitler Santa realises that ‘white’ doesn’t mean ‘entirely devoid of pigment’ and thinks that makes some sort of a point:

Taylor Swift probably never said that. Although Hitler definitely did:

This argument is one of the most prevalent:

@kawunnee you know what they say: Africa for Africans, Asia for Asians, Western countries for everyone!

Other than racists, of course. Who do argue that people should stay on their continents of ethnic origin.

Which is why it’s such a stupid thing to say. They’re not just not arguing with us. They’re also arguing against themselves. Creating a feedback loop in which they debate their own point over and over again.

So should we take these people seriously?

It’s obviously worrying that people believe this nonsense. Especially if you’re one of the people they direct their hatred towards.

The people peddling this garbage also now have ties to The White House. And let’s not forget that, until last month, most of us never took Donald Trump seriously either.

But the arguments these people put forward are ridiculous. And we should never lose sight of that. Nor should we lose sight of the fact that their points are blatantly and unmistakably racist. Which isn’t to say we should just shout ‘racist’ at them. But we should take the time to explain that the drivel they’re spouting quite clearly is.

The far right’s most recent iteration has grown in chat rooms and web forums. The success of their allies has forced them and their arguments out into the open. But they will only survive scrutiny if people shy away from pointing out how preposterous they are. So let’s not shy away from doing that.

– See more from The Canary about fascism.

– Read about how science has firmly debunked the colonial concept of ‘race’ (in the sense of genetically different ethnic groups within humanity).