While you were enjoying your turkey, the Tories repeatedly stuffed us all - Canary 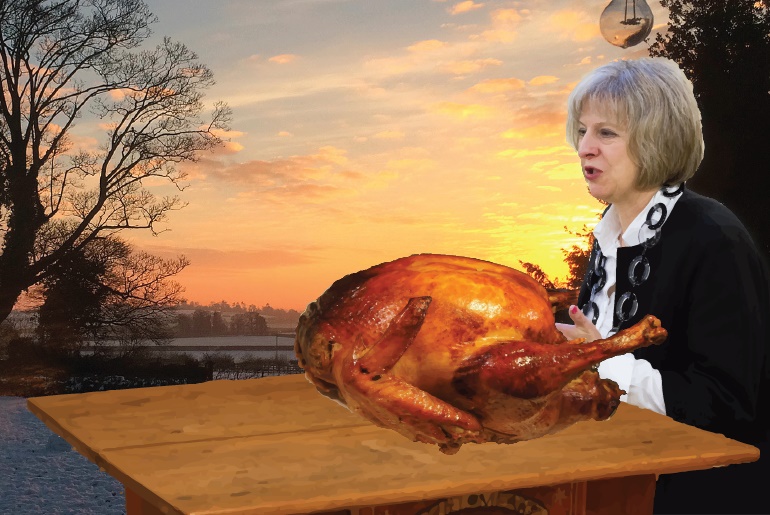 As many people across the UK celebrated Christmas and the new year, the bad news from the Tories kept on coming. The government sneaked out shocking statistics, reports on Tory failures, and countless policy blunders. So here are seven stories that the Conservative government would prefer you didn’t know about. Just in case you missed them over the festive period.

On 30 December, The Guardian revealed that over 10% of the population in England are living in fuel poverty. This is equal to 2.3 million families. But the figure rises to 20% for those privately renting, and 25% for single parents. The worst affected city is Birmingham, where 60,000 families cannot afford to heat their homes. And with energy prices rising by 1.2% from March, making an average bill £1,082, the situation may only get worse.

The Tories’ “chums” in top jobs?

Meanwhile, Labour has accused the Tories of changing the law to give their “chums” top public sector jobs. The new code on public appointments [pdf] will give ministers greater power over who runs public bodies. These include the BBC, Ofsted (the schools inspector) and the Care Quality Commission (the health regulator). This is because Tory ministers will now hand-pick the panel overseeing public sector appointments. Labour’s Andrew Gwynne called it a “Tory power grab” to appoint their “chums and donors to public office”.

Big Mother is watching you…

And as the government attempted a power grab over publicly funded bodies, more revelations were quietly released on Christmas Day 2016. A Freedom of Information (FOI) request revealed that the government had allowed councils to use national law to snoop on the public. For some seemingly ridiculous reasons.

Councils used the Regulation of Investigatory Powers Act (RIPA) to carry out 55,000 days of surveillance on the public. New Labour created the law in 2000, for counter-terrorism purposes. But the FOI request showed that 186 local authorities used RIPA to snoop on us. They did this using secret listening devices, cameras and private detectives. The reasons for the spying included:

But while the government was rewarding its chums, it was also financially stuffing students. Again.

Just before Christmas, the government sneaked out another rise in tuition fees. But it didn’t officially announce the hike of £250 a year, which starts this autumn, even though it will affect over half a million students. It just put the information straight onto the gov.uk website. Liberal Democrat leader Tim Farron said:

This is a shabby little way to announce something, hiding it away in a far-flung corner of a government website.

“Shabby” may be an appropriate word to describe another government policy. On 20 December, the Public Accounts Committee (PAC) slammed the government’s ‘troubled families programme‘. The 2011 scheme’s aim was to turn around the lives of over 110,000 of England’s most vulnerable families by 2015. The government had previously claimed a 99% success rate of ‘turning around’ families. But the PAC said the claim was “misleading” and “overstated”.

Meanwhile, another buried reform just compounded the failure of the troubled families programme. While 3.9 million UK children are living in poverty, the government just scrapped the department dealing with the crisis. New Labour set up the Child Poverty Unit in 1999. But the Conservative government has now merged it with the DWP. And the revelation only came to light because of a parliamentary question by Labour MP Dan Jarvis.

The DWP will take up the programme’s workload. But this comes at a time when it is having to cut its size by 20%. Also, the Institute for Fiscal Studies (IFS) forecasts that child poverty will have risen 50% over this decade. So overall, the picture is bleak for Britain’s most vulnerable children.

Are you unhappy with any of the above? If so, you can show your anger by voting at the ballot box. Or you used to be able to, anyway.

Because the government is going ahead with plans to change the way we vote. It wants to make everyone show an ID card at the polling station before they vote. This will be either a passport, driving licence or utility bill. It also wants to stop people speaking any other language except English and Welsh at polling stations. They say this is all to reduce election fraud. But as The Canary exclusively revealed in August 2016, the changes could stop up to 4 million people from voting.

It would seem, however, that voter fraud is not the massive problem the government makes it out to be. In 2015, the public cast 51 million votes in elections. But the Electoral Commission found just 481 cases of alleged electoral fraud. And only 123 of these alleged cases related to voter fraud, with just six resulting in police cautions. If the Conservatives wish to deal with election fraud, they may wish to look closer to home. At their own party, for example.

2017 is already looking like a worrying year. The UK still hasn’t felt the full fallout from Brexit. More public sector cuts are as yet to bite. And the economic outlook is uncertain. The Conservative government, however, will probably not change tack.

So expect more of the same: burying bad news; persecuting the poor; and attacking society’s most vulnerable, all while looking after themselves and their chums. It’s down to opposition parties, campaigners, and the general public to fight the government’s divisive agenda. And it’s a fight that won’t be going away. Happy New Year.

– Read more articles from The Canary on the Conservative government.