The government is training an army of snoopers, right across British society - Canary 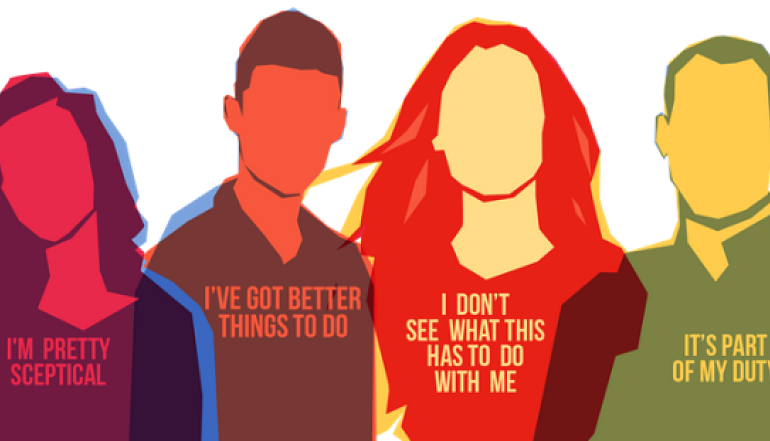 An army of spies is being trained across the British Isles. They are not ‘fifth columnists’ but the man in the pub, the woman on the bus, and even your fellow worker. A series of training modules, examined by The Canary, aims to recruit snoopers in communities and industry sectors across British society.

Also seen by The Canary is a document that provides guidance to police on the recruitment of informers, as well as a presentation currently in use by Merseyside Police that lists anti-capitalists as ‘extremists’.

An army of snoopers

The Prevent programme [pdf] claims to combat terrorism and “radicalisation“. It has featured the heavy hand of government at every stage of its development. It has also attracted criticism from across the political spectrum, including The BBC, The Telegraph, The Guardian and The New Statesman.

The Canary can now reveal that an ‘army’ of snoopers is being trained via a series of Prevent learning modules. These form part of the government’s wider counter-terrorism strategy (CONTEST [pdf]). The modules are a joint initiative of the College of Policing and the Metropolitan Police and available via the NCALT e-learning platform.

Prevent training users can customise the modules by both geographic area and industry sector. Currently, the content is geared to the education and local authority sectors. The introduction to the modules states that the health sector is the next target. The police, fire service, voluntary services, offender management, employment services, prisons, community and youth justice sectors will also be targeted.

In the training modules, users – referred to as “behaviour managers” – are asked to look out for staff “becoming disrespectful”, “asking inappropriate questions”, or displaying an “unhealthy use of the internet”.

A catalogue of resources [pdf] provides behaviour managers with information on the Channel service – a programme which “focuses on providing support at an early stage to people who are identified as being vulnerable to being drawn into terrorism” – and the opportunity to refer targets to the appropriate authorities.

The Canary asked the College of Policing and the Metropolitan Police for more information about the Prevent learning modules and the number of people they aim to train, but received no response.

Struggling to get it right

Under the Prevent programme, over half a million public sector workers have received separate training, of which at least 150,000 are NHS ‘safeguarding’ staff. Prevent guidance also places a duty on schools and other agencies to “have due regard to the need to prevent people from being drawn into terrorism”.

But Rights Watch UK continues to provide cases of children wrongly reported via Prevent. And in March 2016, the National Union of Teachers voted overwhelmingly to reject the programme.

According to to Maina Kiai, the UN’s special rapporteur on the right to freedom of assembly, Prevent has:

created unease and uncertainty around what can be legitimately discussed in public.

He added that Prevent “could end up promoting extremism, rather than countering it”.

Conflating political protest – like anti-fracking and anti-capitalism movements – with terrorism is one example of how Prevent sows the seeds of distrust. The Home Office has been forced to admit that anti-fracking campaigners should not be labelled as extremists.

But on 29 December 2016, The Liverpool Echo ran a story exposing how official documents classed anti-fracking campaigners alongside terrorist groups. It refers to a Merseyside Police presentation given to schools, governors, colleges and childcare providers, which listed anti-fracking activities as a “type of extremism”.

In response, DCI Sarah Kenwright of that constabulary denied neither the currency nor validity of the presentation, saying:

[The] presentation [was] personally delivered by specialist Prevent officers to partners and local businesses, to raise awareness and improve understanding of the potential threats to the UK.

Exclusive to The Canary, here is a version of that presentation [pdf] – see slide 2: 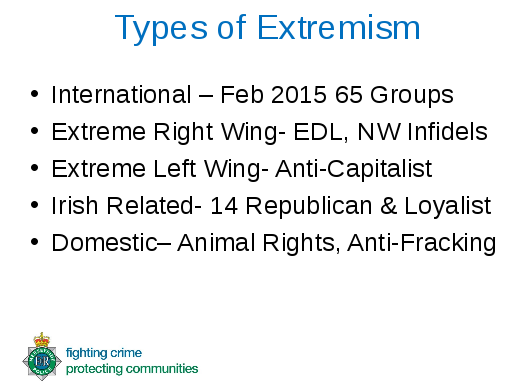 Not forgetting the army of informers

Complementing Prevent (and GCHQ mass surveillance) is the everyday investigative work of the police. A redacted document [pdf] authorised by the National Police Chiefs Council (NPCC) outlines the importance of social media as a source for intelligence. The document, marked as ‘restricted’, also summarises (p6) the role of a ‘Covert Human Intelligence Source’ (CHIS).

The Intelligence Services Commissioner defines a CHIS as (our emphasis):

According to [pdf] a Justice report, just under 40,000 CHISs were recruited in the first decade of the 21st century alone.

What about undercover officers?

The [CHIS] code fails to recognise the compelling allegations of inappropriate intimate and sexual relationships entered into by undercover police. There is no guidance on whether such relationships are permitted, or the circumstances in which they may be considered proportionate.

In the same year, Police Spies Out of Our Lives submitted that police officers are “expressly forbidden from entering into intimate or sexual relationships whilst in their undercover persona”.

In November 2015, the police issued an apology:

But the NPCC document – updated as recently as April 2016 and authorised for adoption by all police forces – takes no account of the Met’s statement. Nor does it reject infiltration by UCOs of political groups.

The Investigatory Powers Act [pdf] does not address these issues either. (Meanwhile, the European Court of Justice has declared the Act’s indiscriminate retention of data unlawful.)

– Support Police Spies Out Of Our Lives.