The right-wing media want a rushed Brexit at any cost, and it's us who will pay the price [OPINION] - Canary 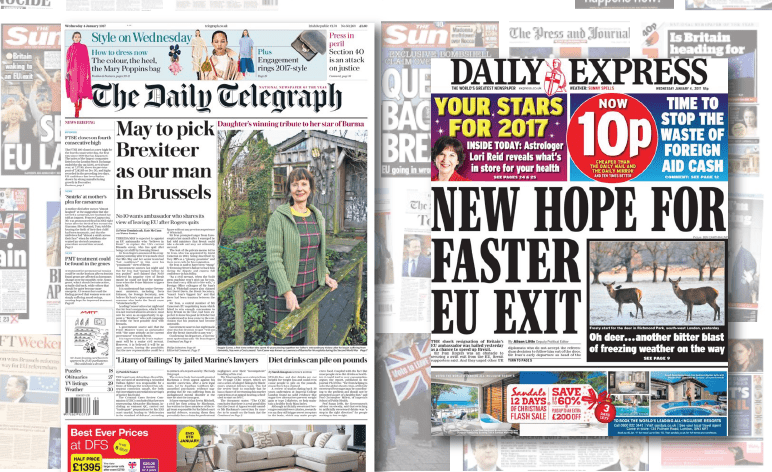 The UK’s ambassador to the EU, Sir Ivan Rogers, resigned from his position on Tuesday 3 January. Elements of the right-wing press have responded to his resignation in a manner which is now typical. Namely, by suggesting that anything other than pushing through a fast, hard Brexit is against the ‘democratic will of the British people’. Rogers was seen as being at odds with this will for claiming that a post-Brexit EU deal could take up to 10 years. The press have also described him as a “Europhile“.

The idea that a successful Brexit could take a long time is not unique to Rogers though. Even the Chancellor of the Exchequer, Phillip Hammond, has said that, done right, the process could take as long as six years. And yet despite this, the right-wing media seem intent on rushing Brexit through at any cost. Even though the public seem increasingly aware that they are likely to pay these potential costs themselves:

Initially, the debate seemed to largely focus on whether we should aim for a ‘hard’ or ‘soft’ Brexit. A soft Brexit would involve things like keeping single market access and freedom of movement. A hard Brexit would see us removed from the EU and its dealings entirely. Talk has recently focused on the idea of a ‘clean’ Brexit. Essentially, though, this ‘clean’ Brexit seems simply to be a rebranding of ‘hard’ Brexit. Albeit with an added insinuation that the process can be achieved quickly, like a “clean break“.

The group spearheading this claim is Change Britain. Change Britain is a campaign group that is backed by prominent Vote Leave supporters like Michael Gove. He is of course famous for being one of the people who promised us an extra £350m a week post-Brexit. The pledge was seemingly abandoned after the referendum itself, having been widely discredited before then. Yet this hasn’t stopped Change Britain from promising a £450m weekly windfall if we leave the EU as ‘cleanly’ as possible.

The new figures are once again being disputed, though. And they are also at odds with reports which predict we will be worse off. Yet elements of the media are scrutinising Change Britain with about as much effort as they scrutinised Vote Leave. As economist Jonathan Portes wrote for The Guardian:

We mock Donald Trump’s clumsy and obvious untruths. But when Change Britain produce a report that contains equally patent nonsense, badged as ‘research’, some newspapers are happy to report it uncritically. And senior politicians like Gove are equally happy to promote it – and when challenged, resort to ad hominem attacks on the supposed motives of ‘experts’ who are simply trying to do their job.

The ‘democratic will’ of the British people

The accusations against Rogers stem from his opinion that Brexit negotiations may take a long time. An opinion which is informed by his years of actually working within the EU. But he is not the only person to be attacked for allegedly attempting to ‘slow down’ or ‘block’ Brexit. The advice of economic experts has also been criticised whenever they have predicted anything less than a glowing future. And judges have been branded ‘enemies of the people‘ for simply doing their job. A job that involved confirming the sovereignty of British parliament. Which was ironic, as the ‘sovereignty of British parliament’ is one of the things that Brexit was supposed to ensure.

As a result of their behaviour, it’s hard to know what the right-wing media mean by ‘democratic will’. The EU referendum was a vote on whether we should leave the Union. It was not a vote on whether people who disagree with us should be silenced. Nor was it a vote for expert research to be ignored. Or for the research we want to believe in to be free from criticism. And it certainly wasn’t a vote on whether the judiciary should obey the will of the media as opposed to the rule of law.

Rogers left a note for his staff in which he said:

This reads like someone who has accepted the result and wants to move forwards. And it is hard to argue with the idea that the UK needs to make use of its experience. Yet the right-wing media seem dedicated to shutting down debate. They don’t want Brexit debated in parliament. They don’t want experts to share research in public. And they don’t want ‘Remoaners’ to have an opinion at all.

Although it’s too early to say how Brexit will pan out, it isn’t too early to discuss it. And the fact that the right-wing press are trying to silence legitimate concerns shows how little they care for the people who these concerns may affect.

– Read more from The Canary about Brexit.