Corbyn's latest pledge was barely reported, but it could boot Richard Branson out of the NHS - Canary 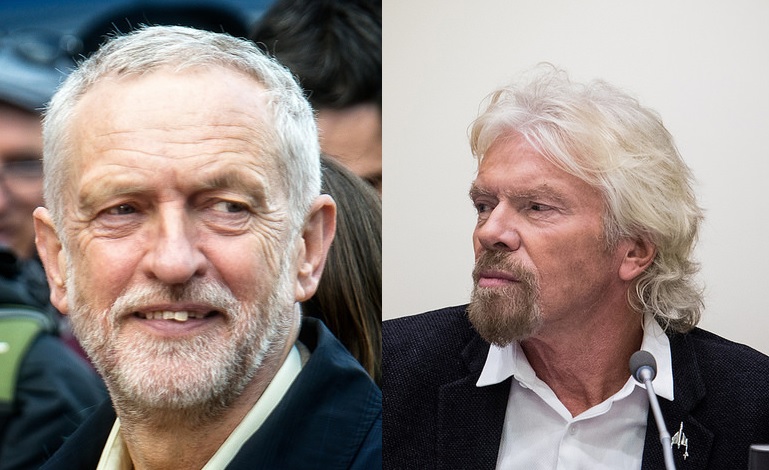 One of the commitments Jeremy Corbyn gave to the UK public this week was extraordinary. But the UK media made very little of it. The Labour leader promised to stop any public contracts over £250,000 going to tax haven-based private companies.

And if the policy was implemented, it could see Richard Branson’s Virgin Care booted out of the NHS.

Corbyn made the pledge in his first speech of 2017 on 10 January. The mainstream media generally focused on his remark in the speech that Labour is not “wedded to freedom of movement”. Alternatively, outlets focused on his comment in an earlier interview that he would consider capping excessive pay. But this striking comment barely got a mention:

All firms with a government or council contract over £250,000 will be required to pay tax in the UK and train young people. No company will receive taxpayer-funded contracts if it, or its parent company, is headquartered in a tax haven.

And we will not buy outsourced public services, such as care for the elderly, from companies whose owners and executives are creaming off profits to stuff their pockets at the expense of the workforce and the public purse.

Since the release of the Panama Papers in 2016, tax avoidance has become a hot political topic. Not least because, in the UK, politicians themselves were benefiting from the practice. The government has talked about getting tough on such activities. But Tory MPs voted down the opportunity for real action when it arose.

Putting your money where your mouth is

Corbyn is essentially advocating cracking down on the business a tax-avoiding company attains. It would ensure that the UK’s public sector is not open for business to those who don’t contribute back to the system directly through taxation.

Of course, it would not wipe out the practice. And it would not affect companies that don’t bid for taxpayer-funded contracts. But outfits like Richard Branson’s Virgin Care, for example, could be in the firing line.

Since its creation in 2010, the UK government has awarded healthcare contracts to Virgin Care totalling over £1bn. In November 2016 alone, it gained a £700m contract to provide core adult social care services for Bath and North East Somerset Council.

But Virgin Care’s ultimate parent company, via a holding company, is in the British Virgin Islands: a tax haven. And Virgin Care is not alone. A number of companies that bid on NHS services have similar corporate structures.

Renationalising the NHS, by stealth

The Coalition government’s 2012 Health and Social Care Act [pdf] turbo-charged private provision in the NHS. It demanded a truly competitive healthcare environment, pitching private companies against the NHS to bid for services.

For the most part, the NHS lost out. The government handed the contracts the NHS had been responsible for since its creation to private firms. But that could change if this policy goes ahead. If you exclude all the private companies with tax haven-based headquarters [pdf], there will be fewer horses in the race. If you go even further and exclude all those that make use of tax havens, it becomes a one horse gallop to the finish for the NHS.

Corbyn has also pledged to renationalise the NHS as prime minister. But we should never put all our eggs in one basket. And this promise, if acted upon, could truly help to wrestle the NHS from these private providers’ grip.

– Sign the petition in support of the NHS Reinstatement bill.

– Join the campaign to Keep Our NHS Public.