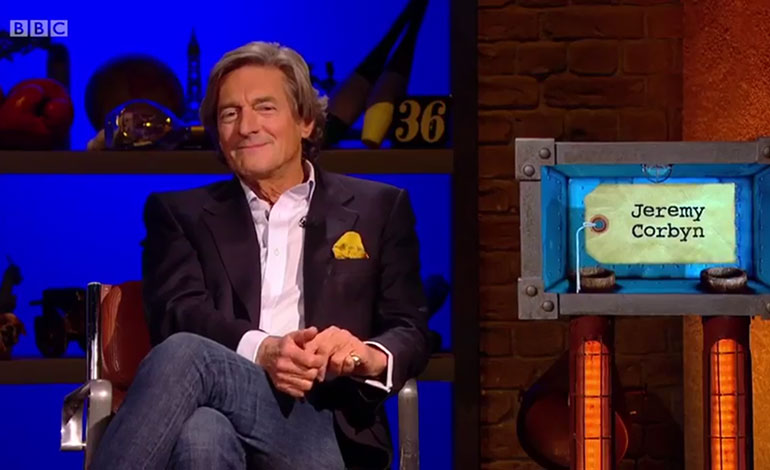 Catherine Tate, Rylan Clark-Neal and Nigel Havers appeared on the most recent episode of Room 101, which aired on 13 January. While Tate and Clark-Neal decided to rid the world of minimiser bras and low ceilings, Havers used the limelight to have a dig at Jeremy Corbyn. But things didn’t go as planned when host Frank Skinner got involved.

Havers is an actor known for appearing in Chariots of Fire and Coronation Street, among a host of other television shows and films. He has received press coverage in the past for his political views. During an interview with BBC Radio 4 in 2014, he criticised trade unions over the tube strikes, and questioned Boris Johnson’s efforts to resolve the problem.

Now, he’s laid into Corbyn. But Skinner was quick to pick it apart.

To a series of cheers, Havers unveils Jeremy Corbyn as his bugbear. He says (at 5:15):

For instance he doesn’t agree with sugar, but he makes jam.

He [Corbyn] said I’m going to be new… it’ll be kind politics… Kind politics! Have you seen the party he runs?! It’s in ruins at the moment. And I’m a Labour supporter in many ways… Seriously.

However many people say ‘you’re not fit to run this party’. He’s not going to move aside, which I think is a little selfish of him.

Well, he does keep getting voted in by an enormous majority of the membership.

Skinner then jokes with Havers, claiming he isn’t surprised he picked on Corbyn. When Havers repeats his ‘jam argument’, Skinner jokes (7:19):

I’m surprised this is the policy you’ve picked on.

Havers is left looking pretty stumped. Skinner quickly moves onto highlighting some of Corbyn’s amusing moments in front of a camera before returning to Clark-Neal.

Havers’ argument was a flop. Even Skinner couldn’t resist ripping him apart for it. We certainly have to hold politicians to account and question their motives and policies. But jam-making? Seriously?!

– Read more of The Canary’s articles on Jeremy Corbyn.

– Read more of The Canary’s articles on the Labour Party.