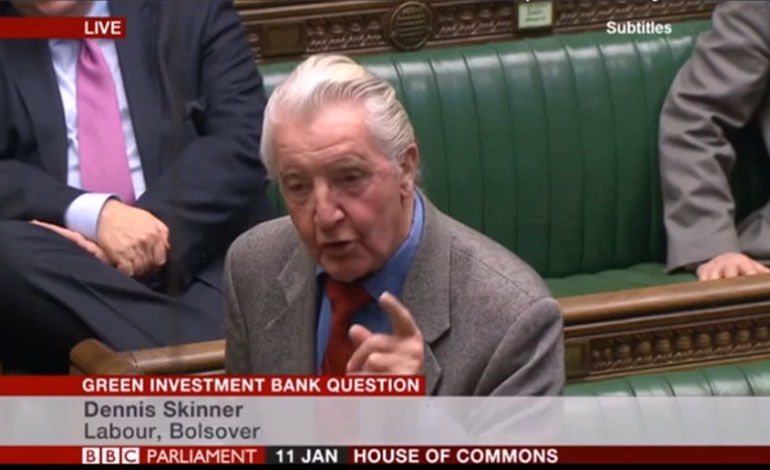 The Conservatives are at it again, selling off another publicly-owned asset. This time, it’s the Green Investment Bank. But while talks are in full swing over which private company will get its hands on it, Labour MP Dennis Skinner is back on form. And he’s not letting another public asset be pried away without a fight.

The Green Investment Bank was created by the Coalition government in 2012. It’s one of the first of its kind, and seeks to foster a greener economy. Set up using £3.8bn of public funds, the bank used this finance to invest in eco-projects around the UK. Such projects include a wind farm on the Suffolk coast and an energy recovery facility in North Wales.

But as The Canary has reported:

in June 2015, Sajid Javid, then business secretary, announced the privatisation of the bank to attract more investment and increase its lending powers.

Now, the government is discussing which private investor will get its hands on it, and there are reports that global investment firm Macquarie is set to win the contract.

But some MPs are not happy. Many are concerned that selling the bank could undermine its green credentials. During a debate about the sale, Green Party Co-Leader Caroline Lucas said:

Will the minister admit that this selling off could lead to the bank being fatally undermined as an enduring institution?

This preferred bidder, Macquarie, not only has a dismal and terrible environmental record, it also has an appalling track record of asset-stripping. So why has the government given preferred bidder status to this company?

Labour MP for Bolsover Dennis Skinner has also spoken out about the sale. He’s had enough of the privatisation of public assets.

Speaking to Nick Hurd, the Business, Energy and Industrial Strategy Minister, on 11 January in the House of Commons, Skinner said:

When is this government going to learn the lessons of the past on selling off public assets? I was here when Mrs Thatcher decided to sell off not only electricity but ​gas, and then, finally, water. She said we were going to be a British share-owning democracy: that was the phrase. Now, if you look at the list, you’ll find that some of them are owned in Germany; some are owned in France; …Macquarie is in Australia, who bought up the Birmingham toll road in a flash under a Tory government.

And now we’re having another lecture on how he’s going to preserve the identity of a Green Investment Bank. History tells us it’s not possible… Why don’t you learn the lessons?

Of course, one of the lessons of privatisation is the record levels of investment that have flowed into the organisations since they were privatised… All I will say is I have a strong instinct that the honourable gentleman would like British Telecom still to be a public company.

You can watch the exchange here.

While Skinner’s words will do little to deter the resolute Conservatives from selling off another public asset, it’s promising to see these MPs standing up to them and challenging their profit-driven ideology.

– Read more of The Canary’s articles on Conservative policies.

– Read more of The Canary’s articles on Dennis Skinner.

–Write to your MP challenging the government’s decision to privatise public assets.