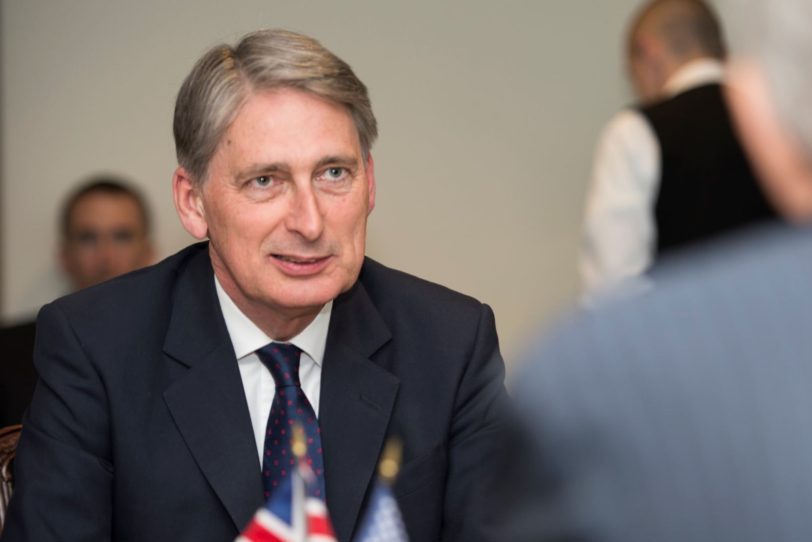 The Labour Party has called for a sleaze investigation into Chancellor Philip Hammond, a personal friend of Prime Minister Theresa May. The call comes after it emerged on 11 January that Hammond took a personal stake in a company only months before that company won a share of a government grant.

In October 2015, while still Foreign Secretary, Hammond purchased 15% of a company based in Cambridgeshire called Hydramach. Hammond did not declare these interests in the government’s register of ministerial interests in December 2015.

In April 2016, the government awarded a consortium (of which Hydramach was a member) a share of a £560,000 grant to develop its business in low-fat/low-sugar consumable products. The consortium also includes J Sainsbury plc: a company that might seem hardly in dire need of a government grant.

The Telegraph published the details of Hammond’s conflict of interest, describing the consortium as “a tech start up quango run by the Department for Business”.

A former standards watchdog openly described his conduct as:

a serious failure… there is clearly a potential conflict of interest.

Sir Alistair Graham, Chair of the Committee on Standards in Public Life between 2003 and 2007, told The Telegraph:

It certainly raises a very big question-mark, somebody like the Chancellor of the Exchequer really can’t afford to be seen to be in such a position. Most people probably thought he was very straight in these matters, and would have been concerned to be seen to abide by the spirit of the rules. It is a failure of leadership that he hasn’t.

He was not alone to think so:

This surely deserves more than usual slap on the wrist from Commissioner for Standards. Unbelievable such conflicts exist at heart of gvt https://t.co/dNzFq8o95m

Hydramach has since withdrawn from the consortium, which is due to receive the first instalment of the grant on 1 February. Richard Hobbs, Hydramach’s director, told The Daily Telegraph:

Hydramach withdrew from the proposed consortium and declined to enter into the agreement with Innovate UK and therefore Hydramach has not received nor will receive or benefit in any way from any grant paid to the other members of the consortium led by Sainsbury.

And Hammond’s interests in the company were declared in the December 2016 register of ministerial interests. A spokesperson for Mr Hammond also said:

The shareholding has been fully declared to the Director General for Propriety and Ethics [Sue Gray] at the Cabinet Office and the independent adviser on Ministers’ interests [Alex Allan] who were content with the arrangements.

Hammond’s spokespeople have been quick to argue that he didn’t know “that the company had entered the assessment stage as part of this consortium, until after the assessment phase was complete”. Also, that he has no say in who the grants go to. And finally, he hadn’t filed the report in the List of Ministers’ Interests because:

it wasn’t considered to be relevant to his role at that time.

And it wasn’t declared in his House of Commons register, the spokesperson said, because:

it didn’t meet their threshold for declaration.

According to The Mirror, Shadow Cabinet Minister Andrew Gwynne has written to Hammond, reminding him:

It is important that those at the most senior levels of government show, and are seen to show, the utmost transparency. The public deserve more than politicians who do the bare minimum in order to protect their own interests.

If Labour has its way, Britain’s Chancellor could soon be under investigation for his financial dealings. The Tory minister tasked with the complex responsibility of holding the country’s purse strings apparently had no inkling where taxpayer money was being spent, only a few months before he became Chancellor. Because the Tories would never come up with plans in advance to benefit one another financially. It’s just outlandish, right?

– Support us at The Canary and help us to continue bringing you independent journalism that really matters.