Journalist blames women in short skirts for being raped. Gets blown to pieces [VIDEO] - Canary 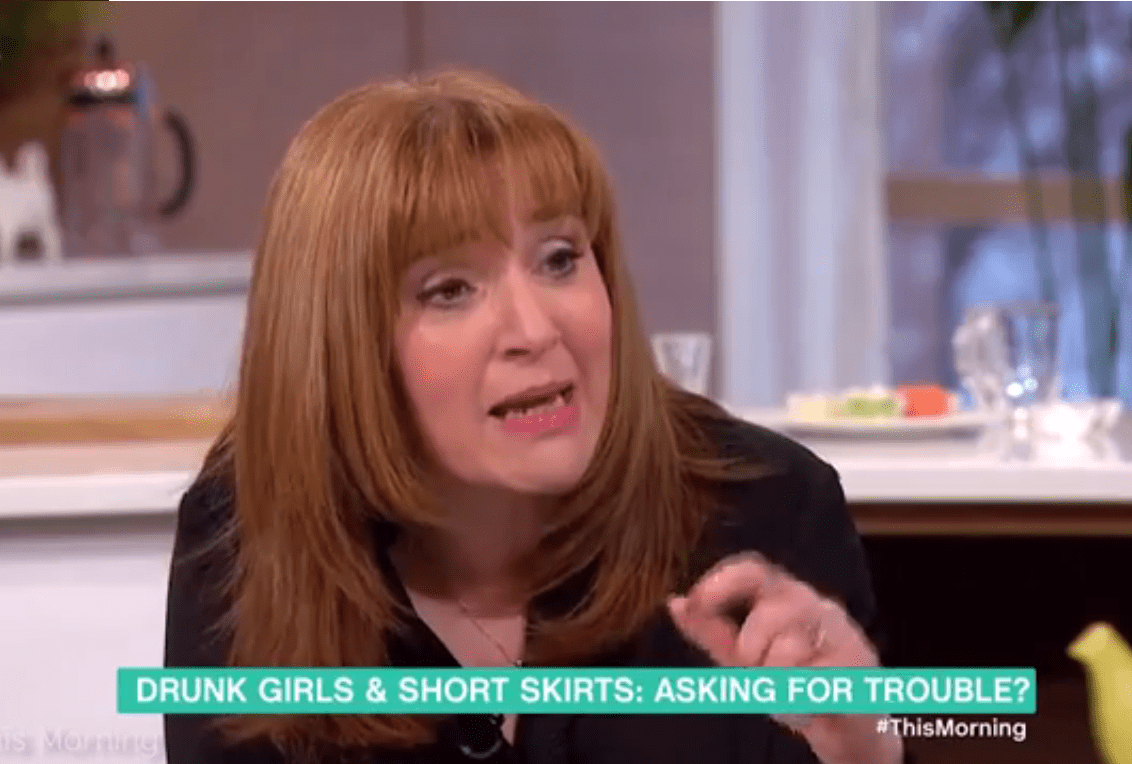 Journalist and broadcaster Angela Epstein has said women have a “level of personal responsibility” for being raped on ITV‘s This Morning.

Social media users, and other people on the show, swiftly blew the regular commentator for The Daily Mail to pieces:

Guests Epstein and Alison Phillips were debating whether drunk women wearing short skirts are to blame for being sexually assaulted.

Epstein later backtracked and said she didn’t “use the word blame”:

Part of the response can be seen here, from Mirror columnist Phillips:

People took to social media to express their outrage over the remarks:

How is it a duty for a woman to 'make themselves safer' by how they dress? It's a duty to educate men that rape is not ok love #ThisMorning

#thismorning Women in countries that wear full length robes suffer sexual assaults, so the clothing has nothing to do with it.

By the same degree I don’t leave my back door open because there is a chance somebody will break in. I don’t leave a phone on the seat. I’m just using this as an analogy to say that – I don’t let my kids play out on the street when it’s getting dark. Not because I don’t have a right to live in a free society where the back door should be allowed to be left open. But if I’m in any way increasing that level of vulnerability then I would like to remove myself from that.

But this Twitter user had another analogy for Epstein:

Omg i am so angry who is this woman. I bet she thinks little girls doing handstands are asking paedos to touch them. #thismorning

You’re making it sound like women are to blame here.

The debate follows a worrying new survey that found that over a third of women agree with Epstein. 34% of women answered yes to the following question:

If a woman goes out late at night, wearing a short skirt, gets drunk and is then the victim of a sexual assault, is she totally or partly to blame?

38% of men also thought the women was “totally or partially” to blame.

The Fawcett Society carried out the research. Its Chief Executive, Sam Smethers, said:

I can think of no other crime where we are so ready to blame the victim but here women are being held responsible for the behaviour of their attacker.

This resonated with the young women we spoke to who told us about the  they experience on a daily basis and the way they have to manage the situation if they are approached in a bar for example. Just saying the word ‘no’ can escalate to violence.

Disturbingly, the report also suggested that one in five men aged 25-35 reject gender equality. 18% said they “do not want the women in my life to have equality of opportunity with men”.

The revelation that some men appear to be actively against equality for women is worrying. So is the minority belief across genders that women can ever be to blame for being the victim of rape. Dangerously, any kind of victim blaming can encourage people to sexually assault vulnerable people. Studies have shown that people who believe such a myth are more likely to:

People are no more likely to rape women in bikinis on the beach. And they’re no less likely to be raped in countries where they must be covered up. It’s the culture of male dominance over women that is largely to blame. Such a culture couldn’t end soon enough.

– You can join the White Ribbon campaign here.

– Call out misogynistic behaviour, and refuse to tolerate it in your communities and workplaces.