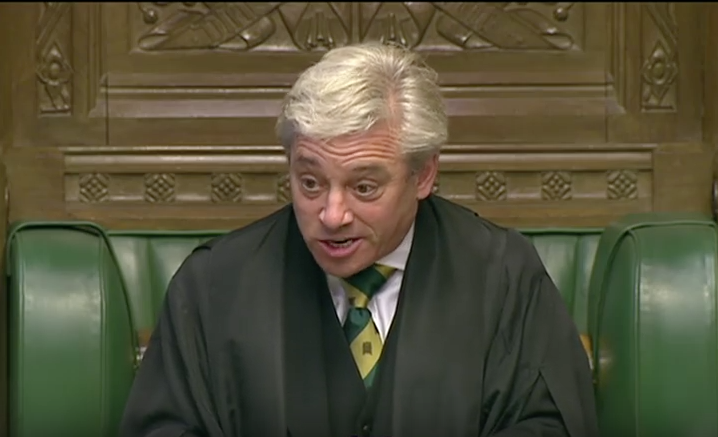 The language of the UK parliament is often stilted and riddled with subtext. But Speaker of the House John Bercow forgot his microphone was on this week, and provided a frank opinion on a “stupid” move by Theresa May’s government.

On Monday 23 January, Defence Secretary Michael Fallon was called to the House of Commons to answer an urgent question over the misfiring of a Trident missile. The misfire took place during a test shortly before parliament voted to renew Britain’s nuclear deterrent, sending its payload on a course for the US in error. The government stands accused of keeping the incident quiet in order to secure the vote.

May gave a faltering appearance opposite the BBC‘s Andrew Marr over the weekend, refusing to answer as to whether or not she knew of the failed test prior to the Trident vote:

May’s Defence Secretary Fallon gave an equally obfuscatory performance in the House of Commons on Monday 23 January. And the Speaker of the House, believing his microphone to be off, gave his frank view on the matter:

To pick a fight with the Chairman of the Select Committee is a rather stupid thing to do.

The Sunday Times revealed [paywall] the failed test on 22 January:

The Sunday Times can reveal that a Trident II D5 missile — which can kill millions when armed with nuclear warheads — experienced an alarming failure after being launched from a British submarine off the coast of Florida in June last year.

It was the only firing test of a British nuclear missile in four years and raises serious questions about the reliability and safety of the weapons system. The failure prompted a news blackout by Downing Street that has remained in place until this weekend.

The cause of the failure remains top secret but a senior naval source has told this newspaper that the missile — which was unarmed for the test – may have veered off in the wrong direction towards America after being launched from HMS Vengeance, one of Britain’s four nuclear-armed submarines.

Opposition party leaders condemned May for her inadequate response to the crisis:

This is a hugely serious issue. There should be full disclosure of what happened, who knew what/when, and why House of Commons wasn't told. https://t.co/vHjJn3dKRD

MoD may have "confidence" but many of us don't – Govt must answer urgent questions in Parliament tomorrow #Trident https://t.co/tN0yDLo8PJ;

This is an issue of such magnitude that the Prime Minister and her cabinet must provide clear, unambiguous answers. May and her ministers are impressing no one by playing debating society games with a question of national security. Not even a longstanding Conservative MP such as Speaker of the House John Bercow.

– Read more from The Canary on Trident.