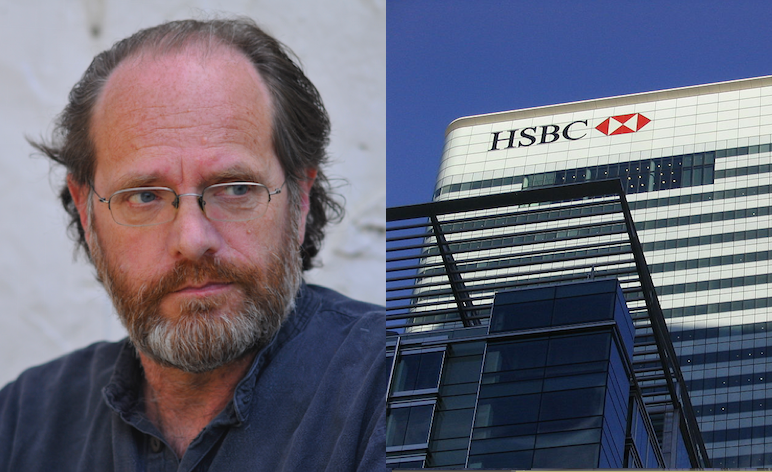 A whistleblower who exposed millions of pounds of “unreasonable” customer charges by HSBC says he feels “vindicated” after the bank agreed to finally redress affected customers. But speaking exclusively to The Canary, the man at the centre of the storm insists that mainstream media outlets have repeatedly “gagged” and “ignored” him. And he believes a “cover-up” of what he considers fraud amounting to £1bn by HSBC goes all the way to the BBC and David Cameron.

Nicholas Wilson is a former Litigation Manager and Head of Debt Recovery at Weightmans Solicitors LLP, a firm which has represented HSBC. As The Canary reported in January 2016, the case involves customers of HSBC-owned HFC Bank and John Lewis Financial Services (JLFS) who fell into difficulty with credit card payments. Between 2003 and 2009, the two companies referred customers having financial problems to their solicitors. It then added 16.4% of customers’ credit card balances to their accounts as a “debt collection charge”.

In 2003, Wilson told HFC Bank that its actions were illegal. But the bank ignored him. And in 2006, Wilson believes Weightmans sacked him for whistleblowing. But in 2010, the Office of Fair Trading said that HFC Bank and JLFS charges to customers were unreasonable. And following a ruling by the Financial Conduct Authority (FCA) on 20 January this year, the bank has agreed to pay back £4m to 6,700 customers after wrongly charging interest on credit card debt. But Wilson believes the true amount HSBC owes is £1bn.

Tip of the HSBC iceberg?

Speaking to The Canary, he said of the ruling:

After all the abuse and derision about my HSBC allegations, it feels great to be vindicated. But the truth about HSBC is still not acknowledged. There are a great many more than the alleged 6,700 customers. When I left my firm there were 80,000. And that’s just the one firm.

After Weightmans sacked him, Wilson complained about HSBC/HFC Bank to the FCA predecessor, the Financial Services Authority (FSA). It did nothing. He then complained to the FCA (which replaced the FSA in 2013). And it also took no action. But when he took the matter to the Office of the Complaints Commissioner (OCC) in charge of the regulator, it did act. In a damning ruling [pdf], it said the FCA action was “bordering on the farcical”, “negligent” and “defensive”. And that it had even attempted to “shift blame” onto Wilson.

The FCA has close ties to the firms involved in the scam. Two of the regulator’s non-executive board members, Ruth Kelly and Baroness Hogg, previously worked for HSBC and John Lewis respectively. And in 2016, the FCA failed to investigate HSBC’s alleged role in helping people avoid tax, known as the ‘Swiss tax scandal’. But Wilson claims the FCA’s “defensive” action was not unusual. He believes that “vested” interests within the political world, the media and the financial services industry have “closed ranks”, with the hope of keeping HSBC actions buried.

Sleeping with the enemy

The media has closed ranks because of ad revenue from HSBC. There have been cover-ups by the regulators, both the Solicitors’ Regulation Authority (SRA) and the FCA. And because HSBC’s position in the US is so sensitive, I’m sure MI5 has been involved. A Director of HSBC, Jonathan Evans, is also the former head of MI5. And he is also a director of Ark Data Centres that supplies services to MI5/6, GCHQ and the Ministries of Defence and Justice. And Baroness Manningham-Buller, a Non-Executive Director of Ark, was a former Director-General of MI5. Also, Lord Janvrin is a Senior Adviser at HSBC Private Bank, while sitting on the Lords Committee responsible for oversight of MI5/6 and GCHQ.

He says that, even after the judgement by the FCA on 20 January, media outlets are still silencing him:

Much of the media has effectively gagged me. I sent The Guardian article to Cathy Newman at Channel 4 News, who had previously spiked [cancelled] the story. But she didn’t want it, saying that newspapers have ‘lower legal hurdles’ than TV. I believe the bank is on to them. And on 20 January, The Law Society Gazette ran an article about the case. But it’s since deleted the story.

This is the exchange between Wilson and Newman, regarding the HSBC story: 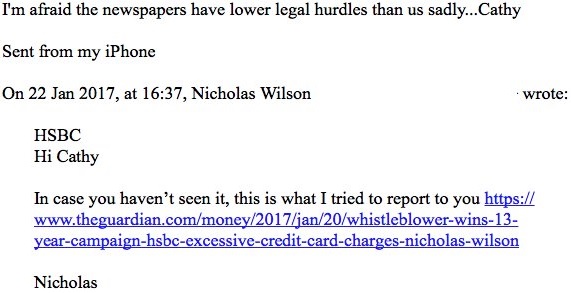 And the Law Society Gazette did publish then delete an article about the HSBC story:

But the cached version of the article is still available.

Wilson says the ties between the financial services industry and politicians and the media are too close. He believes that, “because banks bankroll both MPs and the press, they then become untouchable”.

And it’s this “untouchability” which he thinks has let HSBC get away with giving just £4m to 6,700 former customers. Wilson claims that in his direct experience while working at Weightmans, the true figure of charges was vastly greater:

The £4m is a joke. The practice [of debt collection charges] has been going on at least 30 years. HFC set up in the UK in the 1970s and I have no reason to presume they weren’t adding the charges from the beginning. If you search for £44m on my website, the page shows how I calculated it. In the year of my complaint to the Law Society, the two solicitor firms added £44m to customers’ accounts. That doesn’t mean HSBC received £44m. It means it saved £44m. The solicitors kept all the charges anyway, for their costs.

Wilson wants the FCA and the government to take even more action against HSBC. He says the bank is “so criminal” that authorities should “break it up and pay its assets to the Treasury for the benefit of everyone”. He also believes HSBC executives and the solicitors involved should be in jail, because of what he calls “fraudulent” behaviour.

A trail of dirt all the way to Number 10?

But it’s Wilson’s claims about politicians which are the most explosive. It took him over 13 years to finally get HSBC to admit its wrongdoing. And he believes it is, in part, because of how high up HSBC’s influence goes:

The cover-up goes all the way to David Cameron. He appointed an HSBC director, I believe unlawfully, to head the BBC, to try and stop it broadcasting negative news about the bank. Just after I had given a lecture about the fraud at the Ethical Society. The FCA just passed on HSBC lies to cover the fraud up, a matter the Treasury Select Committee dealt with. I don’t think the committee is compromised, though. Just a bit useless.

The HSBC director Wilson refers to is Rona Fairhead, Chair of the BBC Trust. It is well documented that Fairhead was also a Non-Executive Director of HSBC. But it was Cameron who gave [paywall] her the job at the trust, via her former position in the government’s Cabinet Office. Fairhead was also Deputy Finance Director of the Pearson Group Pension Fund. Its custodians at the time being HSBC.

Cameron’s relationship with former HSBC chairman Stephen Green led former Labour leader Ed Miliband in to call him the “dodgy prime minister” in 2015. Green was in charge of HSBC at the time of the Swiss Tax scandal. Yet in 2010, Cameron made Green a Conservative peer and appointed him to serve as a Trade Minister in the UK government. Despite Lord Green’s high profile role in the tax evasion scam, Cameron revealed the issue wasn’t even discussed during his appointment.

The justice Wilson wants dealt to HSBC, politicians and the media may be a long way off. But this tireless campaigner’s achievements are remarkable. With the full weight of the establishment against him, he has come out partially victorious. But for him, this is still not enough:

I still have severe depression. And apart from a couple of consultancy jobs, I have not worked for 10 years. But I will continue to campaign for the truth. I want to see Cameron and others’ roles in the cover-up exposed; to see some people in prison. And I want to help people get their money back. That way, I might be able to start living my life again. Finally, after 13 long years.

The Canary contacted HSBC, the BBC, Weightmans Solicitors LLP, the Solicitors’ Regulation Authority, the Conservative Party Press Office, Cathy Newman at Channel Four News, and the Law Society Gazette for comment. Despite speaking directly to representatives of HSBC, BBC, Weightmans, and the Conservative Party Press Office, no response was provided for The Canary. And we received no comment from the Solicitors’ Regulation Authority, Newman, or the Law Society Gazette.

This article was updated at 9pm on 24 January. It previously stated Rona Fairhead is a Non-Executive Director of HSBC. She in fact left the bank in November 2015.

– Read more on Nicholas Wilson’s story and donate to his crowdfunder.