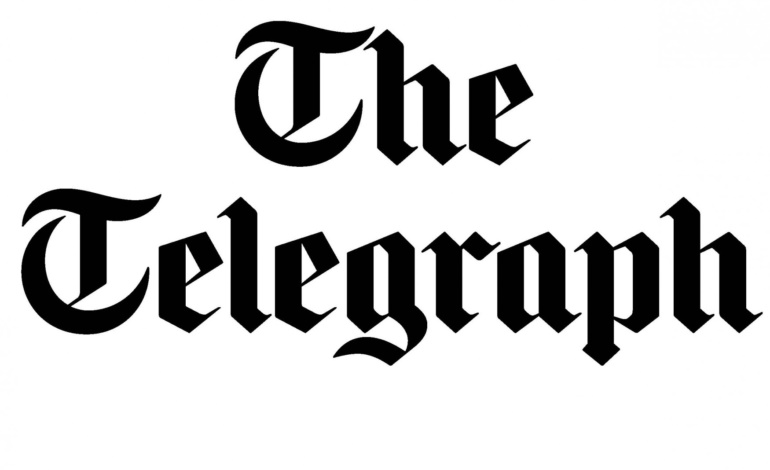 The Telegraph is under investigation by the press regulator, for printing what an independent researcher described as “inflammatory” and “xenophobic” comments about minority communities. The article contained falsehoods about a government scheme to force people to show ID when they vote, and inflated fears of voter fraud being a higher risk in Muslim communities. But in doing so, The Telegraph ignored the biggest elephant in the room: Tory election fraud.

The Telegraph published the article in question on 27 December 2016. The article reported on pilot schemes of the government’s plans to make voters show passports or driving licences at polling booths when they vote. As The Canary previously reported, former Conservative Cabinet Minister Eric Pickles has drawn up the plans for the government, outlining his recommendations for tackling electoral fraud. But his recommendations will fail to tackle fraud by political parties – and could mean around four million people would be unable to vote.

But Joel Benjamin, an independent researcher working with The Canary, made a complaint about the paper’s article to the Independent Press Standards Organisation (IPSO).

In its original article, The Telegraph stated:

Voters in towns and cities with large Muslim communities where there are concerns about election fraud will have to show their passports or driving licences before casting their ballot. The Government is also considering checking people’s nationality to prevent immigrants who are not entitled to take part in UK elections from voting.

[The Electoral Commission] has warned [of] the ‘vulnerability of some South Asian communities, specifically those with roots in parts of Pakistan or Bangladesh, to electoral fraud’. The move comes after Sir Eric Pickles… warned earlier this year that election fraud had been allowed to take place in Muslim communities because of ‘political correctness’.

The complaint to IPSO said The Telegraph was “conflating fraud risk and vulnerable areas with Muslim areas”. And that its article bordered on the “xenophobic and inflammatory”. But the paper stated it was merely echoing Electoral Commission (EC) findings, saying:

The scheme is based on the Electoral Commission’s 2014 report. In the chapter headed ‘Tackling the risk of electoral fraud in specific areas’, the selected areas were identified as places ‘where there appears to be a greater risk of cases of alleged electoral fraud being reported’.

What The Telegraph failed to admit was that framing electoral fraud as a Muslim issue was inaccurate. It chose to ignore parts of the same EC report it used for its article, which stated [pdf p20]:

It would be a mistake to suggest that electoral fraud only takes place within specific South Asian communities.

The original article implied that the pilot scheme was compulsory for the 18 local authorities involved. But The Telegraph has admitted this was inaccurate, saying:

We accept that there is currently no element of compulsion in the Government’s proposals… We accept that this is an inaccuracy that warrants amendment/correction under the Editors’ Code.

The complaint also accused the paper of printing a misleading headline. The original headline on its website was: 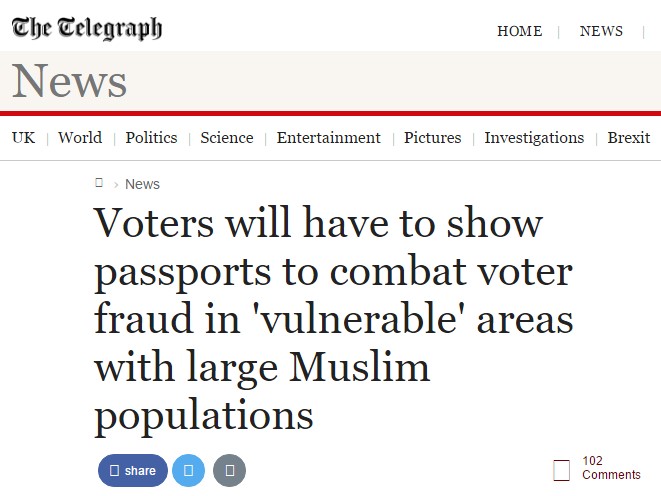 But implying that polling booths will only accept passports as ID is not correct. As voters can use driving licences as well. The paper said that it explained in its opening paragraph that voters could use both forms of ID, but that it could have “better worded” its headline. The paper has since changed the online version to read “ID” not “passports”.

The Canary approached the Electoral Commission for comment. It said:

This isn’t one for us to comment on, we don’t regulate what newspapers print.

It appears fairly obvious what The Telegraph was doing with its article. From its original headline stating that voters in Muslim communities would have to show passports to focusing on checking people’s nationalities, The Telegraph was trying to frame electoral fraud as a Muslim problem.

But the paper ignored the fact that electoral fraud by voters is a tiny issue. Evidence passed to The Canary from the Electoral Commission shows that, of 98.4 million votes cast between 2010-2012, it investigated 948 for suspected electoral fraud. And only three of these ever went to court. That means 0.000003% of all votes cast were fraudulent.

The Telegraph seems to be greatly concerned about election fraud. And the Cabinet Office says [pdf, p11] there should be a “zero tolerance” approach to electoral fraud by migrants. Let’s hope that both organisations show the same level of scrutiny when it comes to apparent electoral fraud committed by the Conservative Party.

– Read articles from The Canary on Tory Election Fraud.