Piers Morgan's war on the Women's March blew up in his face, and he's now having a humiliating public meltdown [VIDEO, TWEETS] - Canary 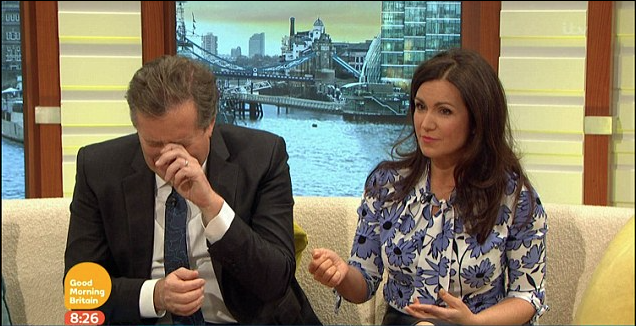 It all started with disgraced former Daily Mirror editor Piers Morgan launching a Twitter war against the 21 January worldwide Women’s March against Donald Trump. In reaction to Morgan’s sexist tweets, actor Ewan McGregor walked out of a planned interview with him on Good Morning Britain. What happened next feels more like an episode of 30 Rock than real life.

Piers vs the Women’s March

I'm planning a 'Men's March' to protest at the creeping global emasculation of my gender by rabid feminists. Who's with me?

Morgan spent the day of the Women’s March tweeting nonsense like the above, and seemed rather chuffed with all the attention he received in response. But a few days later, when actor Ewan McGregor arrived on the Good Morning Britain set and found out Morgan would be hosting, he flatly refused to do the show.

Was going on Good Morning Britain, didn't realise @piersmorgan was host. Won't go on with him after his comments about #WomensMarch

The Trainspotting actor hasn’t commented on the matter since, driving an ego-bruised Piers Morgan to ever greater displays of outrage in efforts to tempt him out.

First, Morgan began frantically retweeting anyone from anywhere who had something critical to say about McGregor’s stance.

I disagree with @piersmorgan on women's marches(they were fantastic) but agree @mcgregor_ewan should hail/defend them on telly, not run away https://t.co/UdhKiiTV4j

Then, Morgan threw a tantrum live on Good Morning Britain – the breakfast show he hosts with Susanna Reid. Morgan’s mighty comeback on the show involved invoking a tactic beloved by 10-year-olds the world over against a hostile sibling. He literally did the whole fake-cry baby voice thing and whined:

Ewan McGregor doesn’t wanna come on the sofa with me! Waaaah

Until co-hosts threw their arms round him in mock-solace.

With no word still from McGregor, Morgan’s behaviour escalated further. He decided to use his Mail Online column to call McGregor a lover of paedophiles.

In fairness, on the “paedophile-loving” point, Morgan has a strong case. McGregor is one in a long list of actors who continue to shower sympathy and adoration on Roman Polanski. Renowned director Polanski is a known sex offender, having raped a 13-year-old girl and then fled the US to avoid prosecution. Once asked how he felt about working with a man prosecuted for having sex with children, McGregor responded:

I felt sad for Roman because he’s an old man who I’m incredibly fond of. I like him as a man.

But of all the people to be calling out the hypocrisy of Hollywood over Polanski, Piers Morgan is the very last person who has a leg to stand on. As one social media user was quick to point out, Morgan has highly publicised acquaintanceships with known sex offenders Paul Gadd, Rolf Harris and Jimmy Savile.

Hmmm, interesting article subject @piersmorgan. Found some pics of you. And I cropped out your URL by the way because fuck you snowflake.🤔 pic.twitter.com/xiprfbScJQ

He can’t stop himself

I didn't 'accuse' him of anything.
It's a fact.
McGregor hates Trump's behaviour to women but likes & works for a child rapist fugitive. https://t.co/UeaDOrVvOd

Piers Morgan is still tweeting about the incident more than 24 hours later, unwilling to accept that his opponent simply refuses to play ball. Proving that, in a one-man argument, Piers Morgan can still find a way to lose.

You deserve better media than this. Read and support new media organisations that do better. Please add more that you like in the comments.