Turkey's President is becoming a dictator, and the UK is helping him out - The Canary 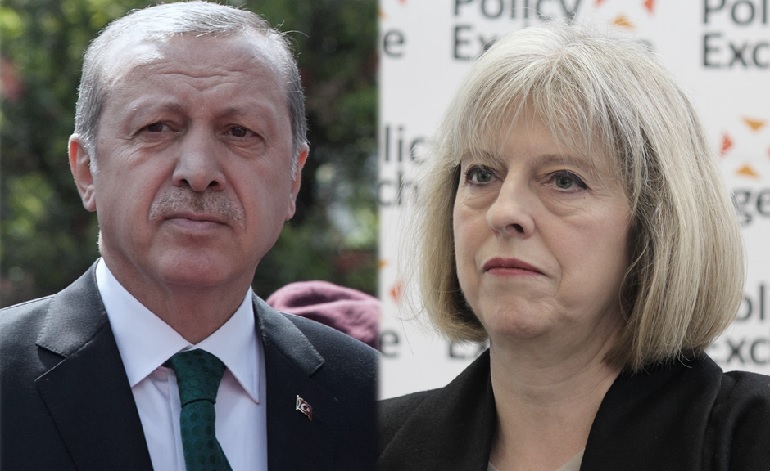 Just as Turkey takes a step closer to dictatorship, newly published export statistics show that the UK has been selling its repressive NATO ally millions of pounds’ worth of arms. Effectively giving a green light to its ongoing descent into authoritarianism.

On 21 January, Turkey’s ruling AKP regime passed a controversial reform package to further empower the office of the presidency – currently run by Recep Tayyip Erdoğan. Al-Monitor describes how the amendments will essentially move the country from a parliamentarian to a presidential system, and how:

The draft contains all the elements that would move Turkey away from the core norms of a pluralist, democratic state of law — separation of powers and a system of checks and balances — and transform it into a majoritarian authoritarian system.

Other media outlets, meanwhile, have spoken of how the amendments “could end Turkey’s republic” and “end its democracy“.

Citizens will vote on the changes in a referendum before the end of April but, as Al-Monitor insists, “the campaign will not take place in a free environment”. Reporters Without Borders (RSF), for example, has called Turkey “the world’s biggest prison for the media profession”. And the arrest of MPs and activists from the opposition Peoples’ Democratic Party (HDP) has drawn strong criticism from human rights groups like Amnesty International.

On 22 January, The Guardian published an article on how export statistics showed Turkey to be “a major buyer of UK-made weapons”. This is unsurprising when we consider that it is one of the Department for International Trade’s “priority markets” for arms exports. The news outlet describes how:

the government believes that arms exports can be a key growth driver for the UK economy. Ministers have been dispatched to a number of Gulf and Middle East states in recent months to promote British weapons. Last year the foreign secretary, Boris Johnson, talked of his desire to agree a “jumbo” trade deal with Turkey.

That’s the same Boris Johnson, of course, who wrote in April 2016 about “a chilling suppression of Turkish freedom of expression”. And the man who won an “Offensive Poetry” contest aimed at Erdoğan a month later.

Since 2015, the UK has sold its NATO ally £330m-worth of arms. And these sales continued even amid after the campaign of repression which followed the failed anti-Erdoğan coup attempt in July 2016.

Andrew Smith, from Campaign Against Arms Trade, responded to the revelations by saying:

The government is always telling us how rigorous its arms export criteria supposedly are, yet it continues to arm and support repressive governments across the world. The aftermath of the coup attempt has seen an erosion of democracy in Turkey, and Whitehall should not be legitimising it.

The UK has had a year and a half to act, but it hasn’t

According to a government spokesperson:

The UK takes its arms export responsibilities very seriously and operates one of the most robust arms export control regimes in the world… Our export licensing system allows us to respond quickly to changing facts on the ground. We have suspended or revoked licences when the level of risk changes and we constantly review local situations.

But the government clearly hasn’t ‘responded quickly’ to the changes in Turkey since 2015.

In 2014, the world was already aware of Erdoğan’s plans to give himself more power and change the Turkish constitution. And in the run-up to the June 2015 general elections, outlets spoke of his desire to “radically redefine the country”. Then, when HDP successes denied Erdoğan’s party the majority it needed to make constitutional changes (in what CNN called a “political earthquake“), one Guardian article insisted that citizens had “acted to prevent an autocratic nightmare”. But the respite was brief. The following month, Erdoğan ended promising peace talks with the Kurdistan Workers’ Party (PKK) , launching a war (against largely Kurdish areas like Nusaybin and Cizre) which has since claimed the lives of hundreds of civilians.

So much for “robust arms export control”

The rest is history. Since July 2015, authorities have shut down opposition protests; closed opposition media outlets; and arrested pro-peace MPs, journalists, and activists.

The truth is that facts have changed on the ground. The level of risk has changed. But the UK has continued to approve arms sales to Turkey.

So much for reviewing local situations “constantly”. So much for taking arms export responsibilities “very seriously”. And so much for operating “one of the most robust arms export control regimes in the world”. They must be having a laugh.

– Speaking about Theresa May’s upcoming meeting with Erdoğan on 28 January, a Number 10 spokesman insisted that “Turkey is an indispensable partner and a close ally for the UK… We have been clear in our support for Turkey’s democracy and institutions since the coup last summer… but we’ve also been clear that Turkey’s response to that must be proportionate and of course we will continue to raise those issues.” Please write to Theresa May and your MP. Ask them to urge Turkey to resume peace talks with the PKK and release all political prisoners.