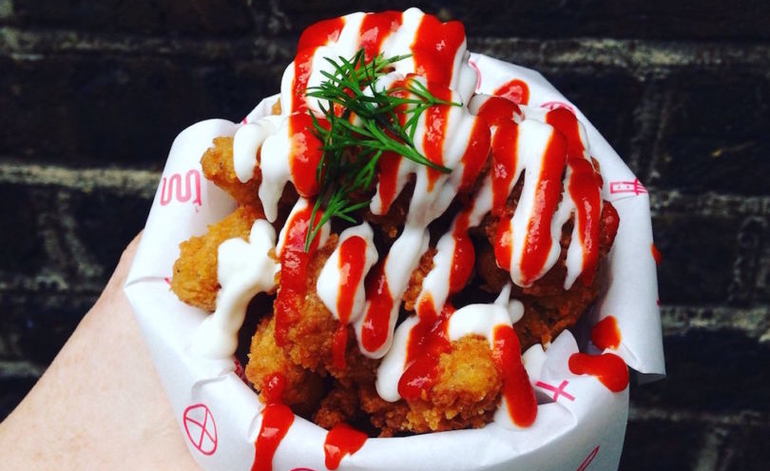 Long queues have formed outside the world’s first vegan chicken shop: Temple of Hackney. Opinion about the London chicken shop has varied. RT described it as “peak-hipster”. But really, it’s much more than just a passing fad.

It may seem strange that someone who has given up meat would want to eat something that resembles it. Doesn’t that defeat the whole point?

However, I think most vegetarians and vegans don’t give up meat because they decide they can’t stand the taste of chicken anymore. It’s usually for ethical, environmental, or health reasons. And while the thought of eating meat again might seem unpalatable, a meat alternative may not be off-putting. Because it isn’t actually meat.

But everyone has different tastes. While some may want something that tastes similar to meat, others may be waiting for something that tastes identical. And others still may just not be into meat alternatives at all. But as the popularity of Temple of Hackney shows, there is serious demand for meat that isn’t meat.

Temple of Hackney’s ‘chicken’ is fried and seasoned seitan – made from wheat gluten. It is commonly used as a meat substitute in Chinese vegetarian and Buddhist cuisines.

It takes around three times the amount of water to produce a pound of chicken compared to a pound of wheat. So it’s more sustainable in that respect. But the real environmental culprit, in terms of food, is beef.

There is no consensus about how much water it takes to produce a pound of beef. But the Water Footprint Network’s (WFN) figure of 1,779 gallons of water may be the most trustworthy. This is because they have created and standardised the methods behind water footprinting. Also, they use large, global data sets that take into account various beef production systems from numerous countries. Using this figure, it takes more than 10 times as much water to produce a pound of beef than a pound of wheat.

Animal agriculture simply isn’t very sustainable. And with the global population set to reach 9.6 billion by 2050, the environmental consequences of intensive farming will only become more severe. In food production, raising beef uses up the most resources and emits the most greenhouse gases. So it’s time to look at some alternatives.

Beef without the cows

Meat giant Tyson foods, Inc. has launched a $150m venture in sustainable food. Part of the fund includes a 5% ownership stake in plant-based meat producer Beyond Meat. The press, food critics, and carnivores have all been praising their meat-free burger. For people who love the taste of meat and don’t want to give it up, this burger could be a game changer. Beyond Burger isn’t available in the UK, but given the rising popularity of plant-based meat, it’s only a matter of time before it is.

Lab-grown meat may also turn out to be necessary if food production is to become sustainable.

In August 2013, Dutch scientists made the world’s first lab-grown burger. They claim that, within a few years, lab-produced meats will start appearing in supermarkets and restaurants. If people can get over the ‘ick factor’ of eating meat grown in a lab, the environmental benefits may prove to be persuasive. Although not necessarily for vegans.

A 2011 study found that growing meat in labs would cut down on land use by 99%, and reduce the associated need for water by 90%.

The use of antibiotics in meat, meanwhile, presents a huge danger to human health. But Professor Mark Post, who has been leading the Dutch team, says antibiotics are not required for lab-grown meat. There’s still work to be done, though, as it doesn’t taste quite like the real thing.

I went to Temple of Hackney last weekend to see if their vegan chicken lived up to the hype. I queued for an hour, and when I left the queue was about three times as long. But it was well worth the wait. It tasted the same (as far as I can remember) as KFC. But for Temple of Hackney to get the real seal of approval, the Chicken Connoisseur may need to pay a visit and tell us what he thinks.

– Check out other articles from The Canary’s Environment section.