Ads on the London Underground have been hacked, and the Tories are going to be furious - The Canary 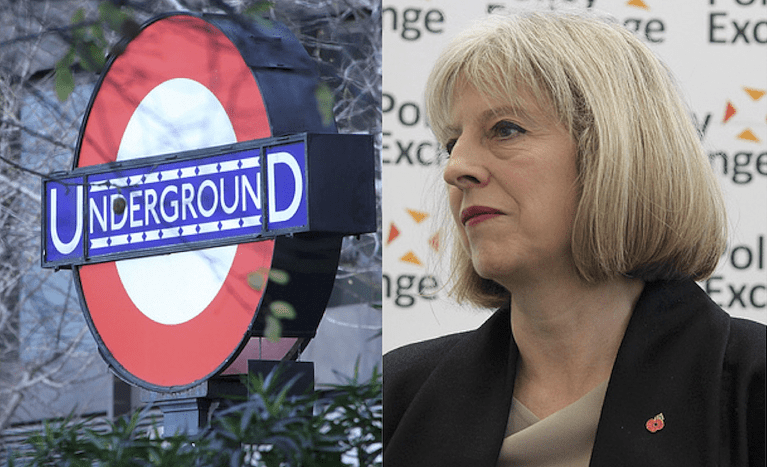 Campaign group End Deportations has embarked on a new guerrilla activist campaign to highlight the discriminatory and racist policy of mass deportations. In support of two weeks of international action against mass deportations, it is replacing ads all over London’s underground service and putting in their place a sharp blast of reality. 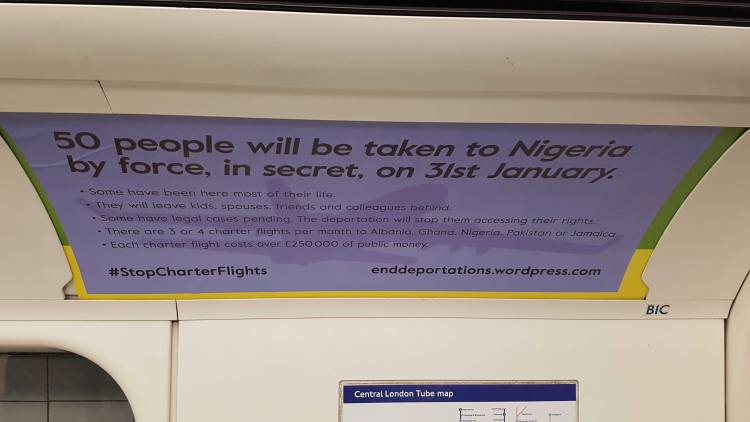 The second quotation is from the website Detained Voices, a website that tells the stories of those detained in immigration detention centres in the UK, anonymously.

Eradicating massive numbers at a time

The Home Office deports thousands of migrants each year, in many cases enforcing their removal. According to MfJ, many of them have ongoing asylum claims and thus cannot access their full legal rights.

A spokesperson for the campaign told The Canary that charter flights go monthly to Albania, Pakistan, and every two months to Nigeria and Ghana. One flight went previously to Jamaica in September, and there will be one to Afghanistan since the EU has signed a deal to enable mass deportations to continue.

While the chartered flights usually go regularly, a flight on 31 January has experienced a change in schedule so as to counter any resistance. A few detainees have already received their tickets for this flight.

Currently, an asylum claimant can challenge a decision on their deportation if they find reasonable grounds to do so. But the Home Office won’t necessarily suspend removal arrangements if the claimant’s decision has already been subject to a judicial review, unless they attain a legal injunction within at least six months. The Home Office takes advantage of this removal window, which has expanded with the new guidance. And under the 2014 Immigration Act, the Home Office no longer has any obligation to tell people when it plans to remove them. It can therefore take individuals in the middle of the night. And it has done, to place them on flights.

This is not exclusive to those in detention. According to legal commentary website Free Movement, one woman was removed after a routine visit to the Home Office. She was awaiting a response to further evidence she had submitted on her case. But she had to wait in a private room when she got there. Home Office staff then told her they would be removing her from the UK that day. She explained that she had an ongoing case, after which the staff left, only to return with a letter refusing her submitted evidence. Taken straight to the airport without her belongings, they took her phone. She was also denied access to a solicitor and to her family.

This process means people have to either rush through legal proceedings or are denied their rights completely.

End Deportations told The Canary that it regularly witnesses unjust cases. This includes people who have had no legal access or very limited access through a legal drop-in surgery in detention. Some have been placed on the flight in their wheelchairs because they were physically unfit to fly. The group said:

The Nigerian High Commission have a list of criteria detainees need to meet to be able to be removed to Nigeria, but they break the criteria all the time. People who were deported on the infamous September 2016 charter flight to Jamaica were taken to a country few actually knew anything about, having lived all or most of their lives in the UK. The majority are staying on distant family’s sofas or in homeless shelters, unemployed and far away from their families.

End Deportations says that those deported have partners, children and friends in the UK. It also says that forced and mass deportations target particular communities. They are not based on individual cases. At a cost to the public of £250,000 per flight, it seems the Home Office needs to fill the seats. MfJ noted:

That means finding people who can be deported to countries where the UK has a deportation agreement – Nigeria, Ghana, Pakistan, Albania and Jamaica.

The group said this ultimately means that officials can deport people at any stage of the asylum process, “rather than ensuring that the appropriate legal avenues and requirements have been exhausted and adhered to”:

For example, a friend of ours called George was forcibly removed last July, in spite of having more than a week left to appeal the refusal of his EEA application to remain in the UK, with his pregnant partner.

The Unity Centre, a not-for-profit group that supports asylum seekers in Glasgow, agrees. It has been in contact with many detainees who receive tickets for the charter flights but lack legal representation. Many are told they cannot access legal advice in the detention centre until the day before the charter flight.

Is the law being broken?

End Deportations believes this brings up the question of whether the Home Office is breaching international human rights laws against collective expulsion. And other organisations, including Corporate Watch, have argued that it has.

But a Home Office spokesperson has said:

The general public expect robust action to be taken against foreign national offenders who pose a risk to the UK – and that’s why we deport those who abuse our hospitality by committing crime… Our deportation action is taken in accordance with UK and EU laws.

Legal redress has been difficult due to systematic legal aid cuts. And these have had a significant impact on asylum seekers. That’s why the End Deportations campaign is demonstrating during two weeks of international action against charter flights. They hope the ‘ad hack’ will raise awareness. It’s time for people to question the unjust and racist policies that are happening right under our noses.

This article was updated at 7.45pm on 25 January. An earlier version incorrectly stated that MfJ is ad hacking the London underground. In fact, it is the group End Deportations.

– Resist immigration raids in your workplaces and communities. See Anti-Raids Network on what you can do.

– Support organisations like Right to Remain that help people establish their right to remain in the UK.

– Write to your MP asking them to tell the government to stop mass deportations.