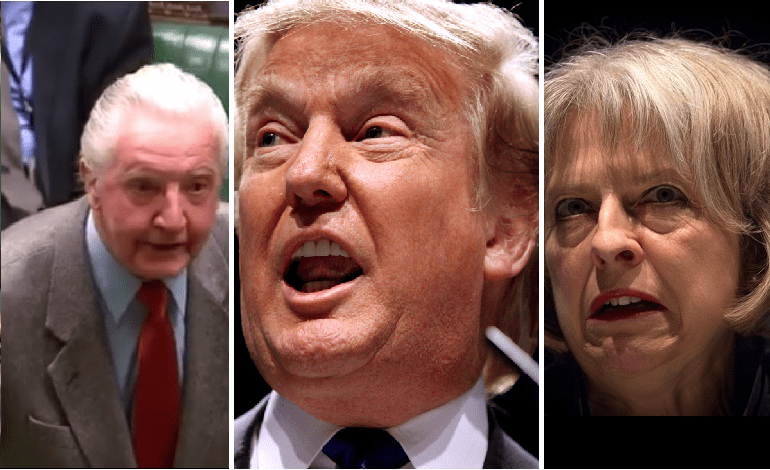 While Theresa May cosies up to Donald Trump, legendary MP Dennis Skinner gave a frank opinion on the new president – and destroyed May in the process.

The 84-year-old MP blasted Trump with one hand, calling him “thick as two short planks”. With the other, he exposed the Prime Minister’s nuclear weapons as anything but “independent”. The Bolsover MP showed that these nukes cannot be “independent” because the US president was given information on the Trident misfire. But parliament was kept in the dark.

The government is accused of covering up the nuclear weapons misfire to secure a key vote on Trident renewal. The misfire happened during the run-up to a major vote on Trident renewal in the House of Commons. A renewal that may cost up to £205bn overall when the NHS, for example, is in crisis. Still, the government buried the failing of the June 2016 test – one of only a handful of nuclear tests since 2000.

It’s worth bearing in mind that the government isn’t testing a new lunch menu at the parliamentary diner. These are weapons of mass destruction. And the latest test accidentally sent a missile on course for the US.

In the Commons, Skinner noted that the American president had access to this information and parliament didn’t. Former President Barack Obama reportedly pressed David Cameron’s government to keep the misfire secret.

Many may be wondering if this is the type of “parliamentary sovereignty” we’ll be enjoying post-Brexit. The Prime Minister is meeting Trump this week to discuss the future of the so-called “special relationship” between the US and the UK.

So far, it seems likely that the UK will in many ways be subordinate to the US after we leave the EU. Jeremy Corbyn raised the meeting at Prime Minister’s Questions on 25 January. The Labour leader asked May if she would raise women’s rights at the meeting. He also demanded that the NHS is not used as a “bargaining chip” in a trade deal with the US. May failed to assure people she would raise women’s rights for the second time. And neither did she assure people that the NHS would not be sold off in a deal.

There are other issues with calling Trident ‘independent’ than just Skinner’s point. Labour and Conservative politicians alike refer to Trident as “operationally independent”. But that is not really true. Not only are the nuclear missiles on lease from the US, but the design, maintenance and testing all depend on Washington. The missiles are guided by global positioning systems from Uncle Sam, and could be denied to us.

A report from the all-party Commons Defence Committee details the real world dependence of Trident:

the missiles are held in a communal pool at the US Strategic Weapons facility at King’s Bay, Georgia, USA.

Trident weds us to aggressive US foreign policy and brings into question the “parliamentary sovereignty” we are supposedly gaining after Brexit. A US foreign policy that is now down to Trump, who has taken to calling May “my Maggie” in reference to the relationship between Thatcher and Reagan.

And newly declassified CIA documents may also shine a light on how important the UK’s nuclear weapons are to the US. The documents show how worried the security agency is about UK opposition to Trident. In the 1980s, at least. The CIA recorded UK Labour Party politicians’ views on the Trident system. The documents included two references to present Labour leader Corbyn.

Considering that Trident is embedded with the US, Skinner was spot on to destroy the idea that it’s independent. And we must applaud him for speaking his mind on Trump. Especially given the Prime Minister is embarrassing us by cosying up to the misogynistic and xenophobic US President.

– Check out the Campaign for Nuclear Disarmament.

– Check out the Campaign Against the Arms Trade.