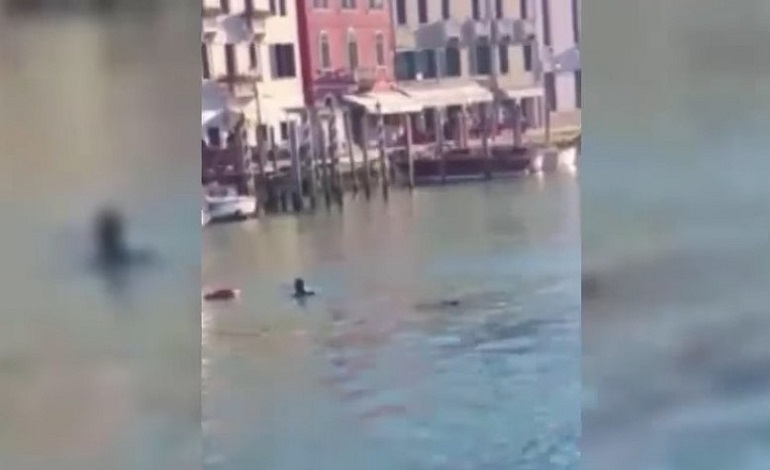 THIS ARTICLE CONTAINS CONTENT WHICH MAY UPSET THE READER

Shocking footage has emerged of the moment a refugee drowned in Venice, Italy. The man, thought to be from Gambia, a country which has been on the brink of war, died in the icy waters of the Grand Canal. But instead of helping him, onlookers filmed, laughed and told him to “go back home”.

The man, named as 22-year-old Gambian Pateh Sabally, died on Sunday 22 January. He got into difficulties in Venice’s Grand Canal as tourist boats went past. But onlookers didn’t care. They filmed the man’s last moments, and shouted abuse.

One person can be heard saying: “He’s stupid. He wants to die.” Another said: “Go on. Go back home.” Someone else said: “Let him die at this point.” And in the video, people can also be heard laughing:

Bystanders did throw three life rings towards the man, but he failed to reach them. And no one went into the water to try and save him.

This situation led much of the media to report that the man might have wanted to take his own life. Without any evidence from the police.

At least three life rings were thrown into the water near the man… But the victim did not appear to reach for them, raising speculation he wanted to commit suicide.

The Times, meanwhile, said that the man didn’t try to reach the rings, “prompting suggestions that he was committing suicide”. But the paper didn’t say who the “suggestions” were from. And The Daily Mail claimed that “hundreds of people” had watched him jump into the canal, and it cited a witness who said:

He threw himself from the pier. At first I thought he slipped but when I saw they threw lifebuoys and saw that he refused, I realised that he had decided to call it quits.

The world in chaos

Gambia, where Sabally was reportedly from, has been on the brink of war for several weeks. In December, Adama Barrow of the United Democratic Party defeated former President Jammeh in an election. But Jammeh refused to step down. On Thursday 19 January, soldiers from Nigeria, Mali, Togo, Ghana, and Senegal began to assemble in mass at Gambia’s borders, preparing to invade and overthrow Jammeh who had been in power for 22 years. And as the Red Cross reported, around 45,000 have fled Gambia, with Jammeh labelled a “dictator” by many.

Italian magistrates have opened an investigation into Sabally’s death, with Italian media reporting that he had residency papers for Italy. In recent months, the country has seen a rise in the popularity of the far right. This is coupled with more than 181,000 refugees arriving in Italy by boat in 2016. An increase of almost 18% compared with 2015.

Regardless of the rise of the far right, or the increase in people fleeing their own countries, the shocking behaviour witnessed while Sabally was dying is surely inexcusable. But it is symptomatic of the attitudes of many politicians, and that may well underscore 2017.