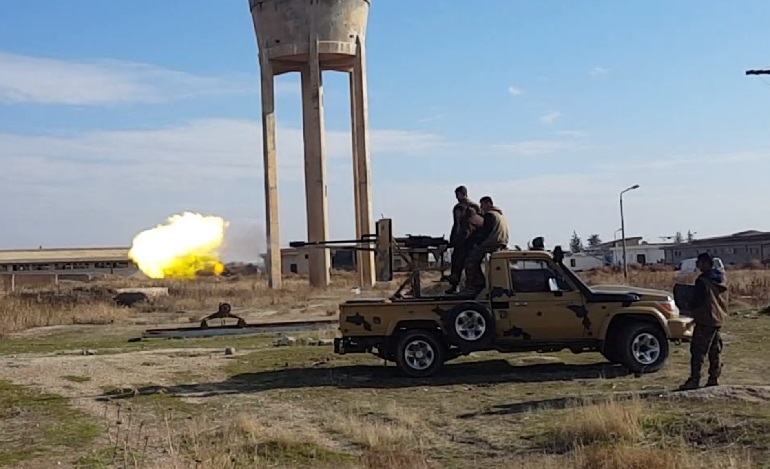 The Canary has long reported on the Rojava region of northern Syria, and on the secular, multi-ethnic, and gender-egalitarian democracy that has developed there in recent years. In particular, we’ve covered both its fight against Daesh (Isis/Isil) and the contribution that international volunteers have made to that cause. Now, one British volunteer has spoken to us ahead of the upcoming assault on the self-proclaimed Daesh capital of Raqqa.

Ozkan Ozdil was born in Turkey, and his family moved to the UK in the 1980s to escape increasing political violence targeting Alevi Kurdish communities. He was just a toddler at the time. He explains:

I have spent most of my adult life supporting anti-war groups and being a leftist doing what I can to help others understand why we need a government that works for the people. Once Daesh attacked Rojava, I tried to spread awareness and raise funds and aid for Rojava. I supported the volunteers and they informed me of the conditions and the revolution there. I spent the last couple of years wishing to be in Rojava and began to lose hope with politics in Britain. Life became a drag and I was very unhappy working all the time (in my family business) and having to spend most of it on rent.

Once he had enough money saved up, he arranged his journey out to the majority-Kurdish region of Rojava. The aim? To support the Syrian Democratic Forces (SDF) in their fight against Daesh.

Rojava as an inspiration

Ozdil tells The Canary that he had never had any military training before heading out to Rojava. He simply wanted to do what he could to defend the Rojava Revolution and the alternative model it offers for the Middle East.

Now, he hopes people back in the UK will learn more about the system in Rojava, which he explains as “allowing people to take control of the government through smaller councils”. For him, this system could be “the future of how we can all coexist without being split by nationalism”. He also praises the feminist fighters of Rojava’s Women’s Protection Units (YPJ), who he says are “shutting down the patriarchal system that has plagued the region” for too long.

But he says the inspiration for other international volunteers varies:

There are about a hundred or so volunteers here at any one time. The main reasons for people joining are fighting Daesh, supporting the Kurdish people to gain recognition, and supporting and sustaining the revolution. A few come to fight Muslims, but soon realise that Kurds are also a majority Muslim people. Some leave while others come to understand the error of their ways.

Currently, Ozdil is in the Yekîneyên Bijîşkî Taktîkî – Kurdish for ‘tactical medical unit’. These are the only combat medics in Rojava at the moment, and they have very few supplies. He says “it’s very hard to imagine how much pressure we’re going to be under in the coming months when we go to Raqqa”.

The SDF and the wider regional context

Comparing the SDF and the Assad government in Damascus, Ozdil says:

The SDF is a collective of all the people of northern Syria who want to protect the ideals of Rojava while implementing them as a model for the rest of Syria. They are also working together to stop religious fanatics from doing more damage to the country. The Assad regime, meanwhile, wants business as usual: to oppress the people of Syria and continue the Assad family rule without any opposition.

Regarding regional state powers, which have sought to sideline the SDF’s key role in defeating Daesh and reaching a peace deal in Syria, he reveals:

We know that no one really supports us without their own agenda. And no one protects us from Turkey, which is openly supporting anyone who is anti-Kurdish or anti-Rojava and its revolution. I lost a few friends, for example, when a Turkish airstrike hit our SDF position after we liberated one area from Daesh.

How to support the fight against Daesh

He asks people back in the UK to:

Spread awareness and get your local authority to take notice. Also, learn about how our government has been selling weapons to Turkey, which is actively attacking Rojava and supporting Daesh (and other radical groups which are no different). Rojava is a slice of heaven, but we know how fragile it is. Since day one, we have been under-equipped, under-trained, and under-funded. And we have fought to save all people from an enemy which is funded and supported by so many countries around the world, whose goal is death and destruction. What more reason does anyone need to want to help Rojava?

And indeed, if Daesh is the enemy of pluralism and democracy, Rojava is the opposite. So if the world wants to see peace, equality, and democracy in the Middle East, it needs to recognise and support Rojava – and the alternative it offers.

– Write to the Prime Minister and your MP. Ask them to urge the Turkish regime to resume peace talks with its Kurdish communities; and to focus its efforts on defeating Daesh and other jihadi forces.