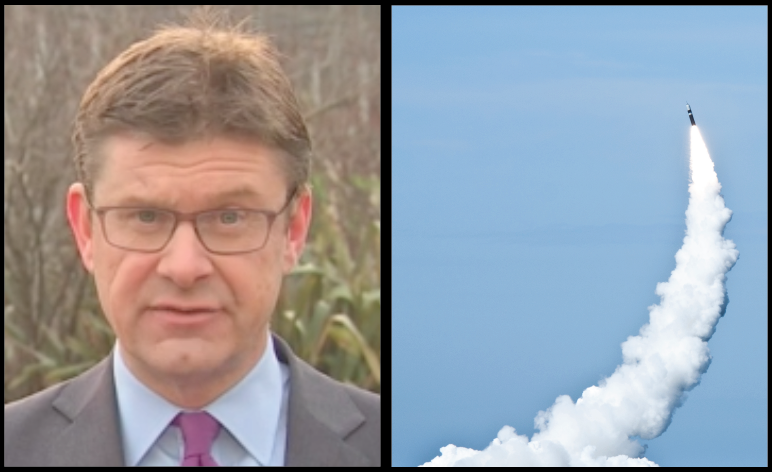 On Sunday 22 January, Andrew Marr interviewed Theresa May about Trident. He pressed her on whether she knew about a failed missile launch which occurred just before parliament voted to renew the nuclear weapons system in July. Now, Business Secretary Greg Clark has also evaded questions about that failed test.

The Sunday Times revealed [paywall] the failed test on 22 January:

The Sunday Times can reveal that a Trident II D5 missile — which can kill millions when armed with nuclear warheads — experienced an alarming failure after being launched from a British submarine off the coast of Florida in June last year.

It was the only firing test of a British nuclear missile in four years and raises serious questions about the reliability and safety of the weapons system. The failure prompted a news blackout by Downing Street that has remained in place until this weekend.

The cause of the failure remains top secret but a senior naval source has told this newspaper that the missile — which was unarmed for the test – may have veered off in the wrong direction towards America after being launched from HMS Vengeance, one of Britain’s four nuclear-armed submarines.

On 23 January, Sky News asked Clark if he knew about the incident before the renewal vote:

Sky‘s Sarah-Jane Mee asked Clark if he knew there had been a failed missile test. After a long pause (the first of many, which Clark claimed were due to sound problems), he responded:

As the Prime Minister said yesterday, on Trident, it’s not the approach of the government to comment on the various tests of weapon systems

Mee stopped Clark at that point and said that this was “blatantly not true”. She pointed out that the government has issued press releases on successful weapon tests and questioned why the country, and especially parliament, were not informed about a test that had failed. Clark responded:

In terms of what’s happened in the past, I think there have been occasions in which photographs have been released, but as a general policy, it has not been the approach to comment on all of the different tests of the systems and the weapons.

Somewhat ironically, there was a background noise at 01:19 in the video which sounded like a car crashing.

Meanwhile, Mee continued to point out that the government does comment on Trident tests. She also asked Clark if the Prime Minister knew about the failed test. Clark responded:

Well, I think if you’ve got a policy that you don’t comment on all of the tests of our weapons systems, whatever they are, then you’ve got to… apply that approach, and that’s what the Prime Minister did yesterday.

And Mee kept pressing Clark on whether he or the Prime Minister knew. But Clark continued to swap between complaining about sound issues and avoiding the question. Mee concluded the interview by saying:

Mr Greg Clark, we’re going to leave it there. Miscommunication on so many levels.

When Andrew Marr questioned the PM about the failed Trident test, meanwhile, he directly asked her if she knew about the failed launch before the Trident renewal vote. No fewer than four times! And she refused to answer on all four occasions:

Did you know?
Andrew Marr asks Theresa May four times about a reported Trident misfire in June.
More: https://t.co/DUSWiynpNq pic.twitter.com/jdUgL7teXp

This is how some MPs responded:

This is a hugely serious issue. There should be full disclosure of what happened, who knew what/when, and why House of Commons wasn't told. https://t.co/vHjJn3dKRD

MoD may have "confidence" but many of us don't – Govt must answer urgent questions in Parliament tomorrow #Trident https://t.co/tN0yDLo8PJ;

People could argue that not commenting is a defence strategy, as we would not want our enemies to know about any failings. But many members of parliament voted to renew Trident without the broadest range of information. Theresa May needs to explain if she herself had this information; and if so, why she withheld it.

– Take action with the Campaign for Nuclear Disarmament.

– Write to your MP to express your views on Trident.