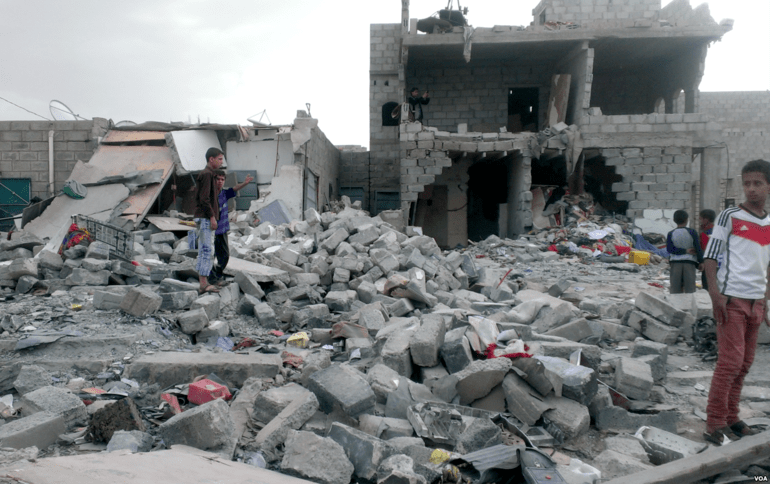 Ministers have admitted that they do not investigate whether Saudi Arabia has violated international humanitarian laws (IHL) before selling weapons to the country.

The government comes up with an “overall judgement” that arms won’t be used in such violations. The problem is that ministers reach this conclusion without addressing violations in particular instances. Why? Ministers say that it’s not possible to reach conclusions about specific incidents in conflicts where the UK is not involved. But this justification doesn’t hold water. The government knows full well what Saudi Arabia is up to with the weapons that the UK sells it.

The Committee on Arms Export Control published a report which concluded that the UK should halt the sale of weapons to Saudi Arabia. This is because of the evidence of violations of IHL by the country.

For example, a Saudi-led airstrike in Yemen was responsible for killing 47 civilians and injuring 58. The Gulf state has also used British-made cluster bombs in the on-going conflict in Yemen, which the UN believes has led to 10,000 civilian deaths.

It is for these very reasons that the US decided to put the brakes on its planned arms sales to Saudi Arabia. Lib Dem MP Tom Brake reacted strongly against the British government. He said:

Instead of fully assessing the significant evidence of horrific attacks by Saudi on civilians in Yemen, they are burying their heads in the sand and allowing British-made weapons to be complicit in these attacks.

This is the dark side of a Tory-Brexit government who are desperate to pursue trade, no matter the human cost.

As previously reported at The Canary, last October the Saudi-led coalition allegedly bombed a funeral gathering in Yemen. The attack killed 140 people and injured more than 500. And that same week, the UK government was in talks with Saudi Arabia about another five year weapons contract.

Theresa May is fully committed to maintaining a strong relationship with Saudi Arabia, despite the evidence [pdf] Saudi Arabia is deploying UK-made weapons in Yemen. This has crucial implications in terms of the UK’s accountability.

Actor Simon Pegg spoke out about the issue. If the weapons being used in Yemen are British-made, then the UK government is morally culpable for the resulting death, harm and destruction. Perhaps not directly responsible, but responsible nonetheless. Indeed, the Yemeni government has said the UK government is itself guilty of war crimes for supplying weapons to Saudi Arabia.

The UK has also been accused of blocking EU efforts to carry out an independent inquiry into the war in Yemen. Foreign Secretary Boris Johnson rejected the need for such an inquiry. He argued that the UK was:

using a very, very wide variety of information sources about what is happening to acquaint ourselves with the details.

But it’s hard to take this argument seriously. Because we now know that Ministers don’t reach conclusions about any of the ‘details’. Yet somehow they can get an idea of the ‘bigger picture’ without these details. Johnson’s statement is smoke and mirrors. The government appears less concerned with the evidence for violation of IHL and more fixated on ensuring that lucrative arms deals with the Saudis to go ahead uninterrupted.

What the British public has to say

A recent poll published by Campaign Against Arms Trade (CAAT) shows that the majority of people (62%) think selling arms to Saudi Arabia is unacceptable.

But that still means 38% believe it’s acceptable to profit from wars in other countries. Not everyone is aware of the true extent of the suffering in Yemen. Or how the UK’s relationship with Saudi Arabia plays an undeniable role in the thousands of lives that are lost or destroyed. But part of the reason for this ignorance, and lack of opposition, is due to the government. Since, as we’ve just seen, it has actively opposed inquiries into the situation.

On 7 February CAAT will take the government’s decision to keep supplying Saudi Arabia with arms to a judicial review at the High Court. CAAT wants the Department for International Trade to suspend all existing arms export licences and to stop issuing new ones. If successful, it will be a blessing for Yemen. If unsuccessful, we can’t become despondent. As taxpayers, we are also funding this war. So we must recognise our involvement, and do what we can to stand up for the Yemeni people.