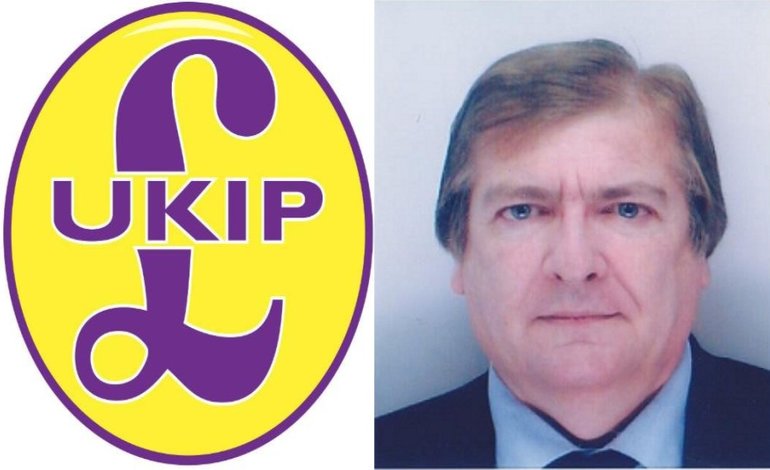 A UKIP politician has launched a racist rant in which he refers to black Britons as “darkies”, and states that we should “deport” the “buggers”.

Philip Winter is a UKIP Councillor in Bristol. He was outraged to hear that Yale University will be changing the name of a college dedicated to white supremacist John Calhoun. University President Peter Salovey told reporters:

John C. Calhoun’s principles, his legacy as an ardent supporter of slavery as a positive good, are at odds with this university.

For most, a sensible decision. For Councillor Winter, an outrage.

Twitter users were quick to point out the irony of Winter’s multiple grammar and typing errors.

Goodbye, Cllr_Williams. I hope you enjoyed your time on the council. Now enjoy your time at home in your pants watching TV.

Do you really think "darkies" is right term to use in this modern diverse country. You mastery of English is woeful

The tweet continues to circulate as Winter faces the ire of Britons who do not wish to be represented internationally as racists. But his account continues to spew sexist and racist tweets.

If she was so nice looking, why is she adorned with so-many garish tattoos! Not ladylike or role model, more Prison fodder!!

I would have liked Paul to have asked the Mosque folk why they wear Islamic clothing as it does not help integration in GB?

When local media reported a dead pig by the side of a road, Winter thought it was time for a ‘joke’.

Well don't just drive off! That's a good meal for at least 50 "Refugees"!! 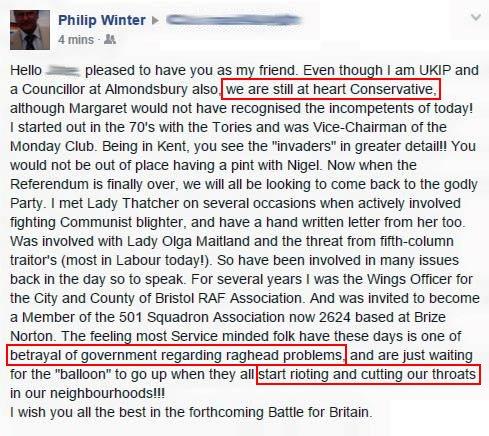 And when Donald Trump came under fire for his comments about groping women, Winter leaped to his defence. He wrote a letter to regional newspapers, which stated:

Load of nonsense over nothing!

Donald Trump was just having a bit of banter which many have done also!!

When out and about, lots of blokes look at pretty girls, and would say they are “lookers”!!!

The way people view what was innocent humour today, well they must be “odd”?

Incidentally, many Tv shows in the 1970’s, they did talk like this about sexy looking birds!!!!

Great Britain unfortunately is having an epidemic of minority self appointed sermonising troublemakers, who are intent on altering long-held innocuous terminology and language to fit a more nefarious and sinister Socialist agenda!!!!!

– Contact Almondsbury Parish Council with your views on Cllr Winter.