Theresa May claims she's ridding the police of racism, but these figures show the shocking reality - Canary 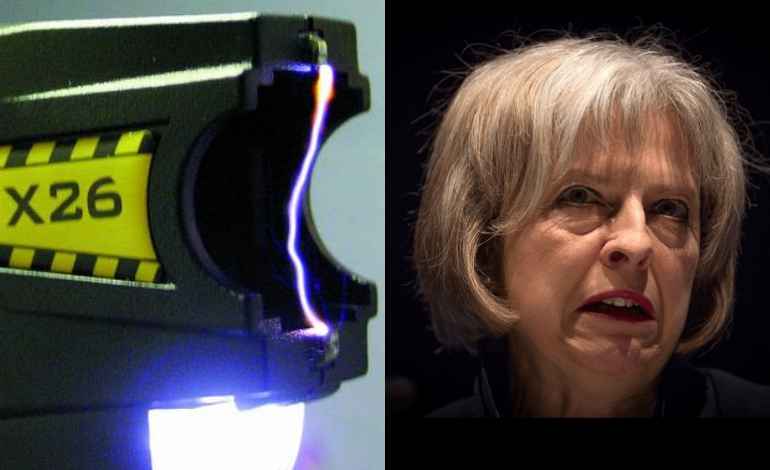 Theresa May recently claimed that she was ending racism in police stop and searches. Yet the Metropolitan Police have once again been accused of racism. Because new figures show that black and mixed-heritage people are far more likely to be tasered.

According to figures obtained by The Guardian, 40% of incidents of taser use in London were against people from black or mixed-heritage communities. This is despite the fact that these groups only represent one sixth (16%) of residents.

And it’s not just in London. Figures from 2015 show that black people are three times more likely to be tasered across England. And this was shown clearly in recent footage of Avon and Somerset police tasering their own race relations adviser. All because of a case of mistaken identity.

These figures will fuel accusations of institutionalised racism. Accusations that even the Met Commissioner, Bernard Hogan-Howe, freely admits.

A spokesperson for the Campaign Against Police and State Violence claimed that:

This racial bias cannot be blamed on individual rotten apples, the consistency of disproportionate racist outcomes means that the entire barrel is suspect.

It’s also important to remember that police usage of Tasers in England have caused a number of fatalities, which means the police are disproportionately targeting black people with potentially lethal force.

The Met police denied racism, claiming “the ethnicity of the person is completely irrelevant”.

And the Met spokesperson further stated:

The Metropolitan police service engages with communities regarding use of force by its officers and specifically regarding the carriage and use of Taser. The current level of deployment is deemed to be appropriate to the threat and risk faced by officers, doing their duty to protect Londoners.

Officers know that any use of force – which includes the use of Taser – must be entirely justified and that they may be asked to account for their actions.

But the Met faced 245 accusations of racism in 2015 alone. Not one claim was upheld. Which makes the assertion that police will be held to account for their actions ring hollow.

Theresa May has claimed in parliament that:

I have ensured that stop and search is reduced because I don’t believe that anyone on the streets of this country should be stopped and searched because of the colour of their skin.

But the stop and search figures do not back up her claims. It’s time to admit that racism is alive and kicking in the police force. And it’s time to do something about it.

Featured image via Wikipedia and screengrab