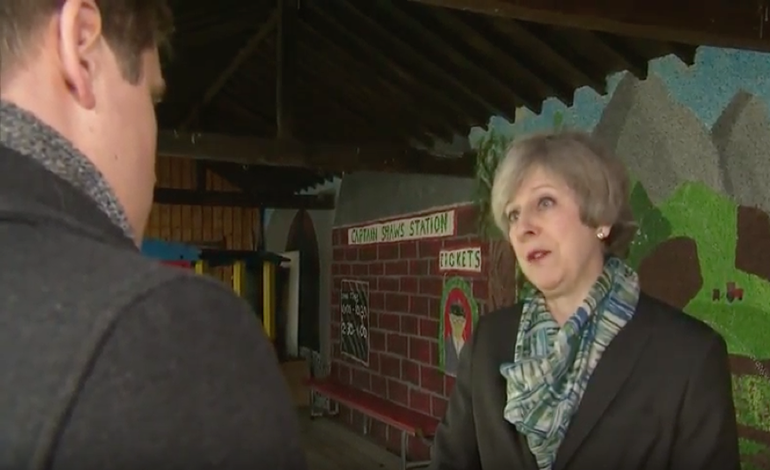 Theresa May made a 700-mile round trip to Copeland this week, in efforts to win her party some votes in a crucial by-election. Instead, she ended up crashing and burning in an interview with ITV – and it may have cost the party any hope of victory.

Theresa May arrived in Copeland to shore up the Conservative vote. But her shambolic appearance may well harm the party. The Prime Minister seemed unaware of the key issues driving the campaign, and made a monumental gaffe.

The Prime Minister was asked directly about the central issue of the Copeland campaign no fewer than four times in an interview with ITV. And each time she dodged the question a little more awkwardly. With friends like these, Conservative hopeful Trudy Harrison has no need for enemies.

The Copeland by-election has become a battle over maternity care.

The NHS already needed an additional 2,600 midwives in 2015. But decisions from Downing Street and the Treasury have exacerbated the issue. There is now a 3,500 shortfall between the number of midwives NHS England needs and the number it has. The government has cut the bursaries that supported student midwives, the training budgets for maternity staff, and the budgets for most basic care. This has left the service understaffed, and remaining maternity care staff undertrained, underpaid and overworked.

This national issue has become a local issue for voters in Copeland. West Cumberland Hospital will lose its consultant-led maternity service as a result. This will leave expectant mothers needing to travel 40 miles to Carlisle for emergency care. Last year, midwives at the hospital wrote an open letter to Stephen Eames, the Chief Executive of North Cumbria University Hospitals NHS Trust. It stated that as a result of the cuts:

Labour’s candidate for the by-election has promised to save the hospital services. Gillian Troughton, a former NHS doctor, made her promise at a campaign event outside the hospital, saying:

The Tories want to downgrade our maternity ward, and close our A&E and children’s ward. The idea of a woman in labour having to travel over 40miles up the road to Carlisle to see a doctor, is frankly dangerous. I should know, I’ve driven that journey myself, as a blue-light ambulance driver.

The Tories’ are putting our NHS at risk. Their plans for West Cumbria are about costs, not care.

This forced local Conservative Trudy Harrison to promise to stand against the cuts, in contrast to Conservative policy in Westminster.

Out of touch and out of time

In stark contrast, Theresa May’s evasiveness exposed Harrison’s promise as nothing more than tokenism. The Conservative Party and its Prime Minister have no intention of reversing their cuts to maternity services, in Copeland or anywhere. While May has embarrassed her party, she has provided an inadvertent service to voters. Vote blue, get mean.