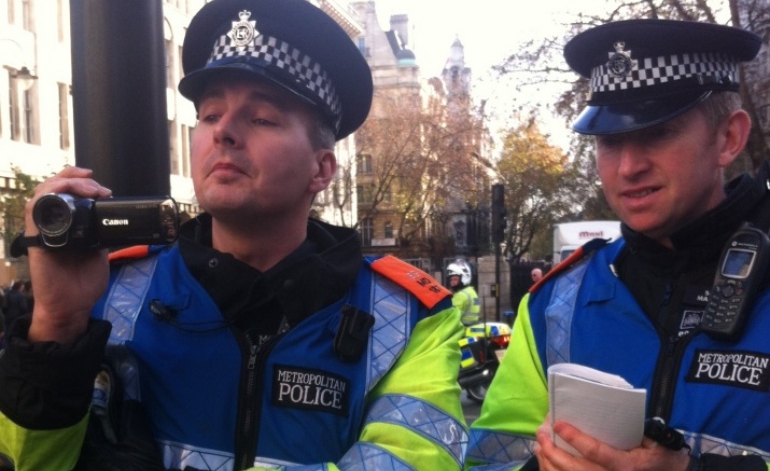 The police have admitted in an extraordinary letter that they can stop and “engage with” anyone because of their political beliefs. And despite allegations of harassment, this is deemed a “legitimate policing purpose”.

Tim from Bristol was stopped at Stansted Airport in January 2016. He described what happened:

As I was leaving the EU e-passport gate… I was approached by a man… He said ‘Hi Tim, I’d like to have a word with you. I think you know what this is about.’

Tim stated that he got his phone out to call a friend and:

A man who had approached in the mean-time from the right… asked me to turn my phone off. I repeated that I had to take the call. When my friend picked up I asked them to call my solicitor.

One of the men identified himself as a police officer. Tim asked if he was being detained and the officer replied:

He kept saying that he wants to talk somewhere else because it would be ‘in your interest’ and I wouldn’t want to talk about it in public. I just repeated that I wanted to stay where we were.

But the officers did not give up:

I asked him what it was about to find out if I could leave, and he said that I’m ‘heading down a dark path’ and ‘I can buy you a drink’. At this point I’d had enough so I told him ‘if I don’t have to talk to you then I’m leaving’ and started walking. He said ‘we’ll come with you’. I said ‘I’d rather not’ but he walked by me anyway.

Tim then started recording the conversation. He repeatedly asked the officers for their names, but they refused to respond. Instead, they stated “You don’t need to record this”, and started walking away.

Tim made a complaint about the encounter through his solicitor. And the response is quite extraordinary. Because Tim is an anarchist, this behaviour is considered “legitimate”.

The letter, seen by The Canary, states:

The police officers approached Mr… for a legitimate policing purpose. (Police officers are charged with the maintenance of peace and order and should always be interested in trying to engage with individuals who may align themselves with anarchist [disorder] ideology…).

The police refused to answer any other questions Tim posed in his complaint. He told The Canary:

I’m not surprised that the police are harassing me. Their job is to protect the rich and powerful – exactly the people that anarchists want to get rid of. What I am surprised at is that they are cowards about it. When they stopped me at Stansted Airport, they were desperate to ‘have a chat’ (ie ask me to be a grass). Now, a year later, they are still refusing to put their questions in writing.

But despite these experiences, Tim is undeterred. And he has a clear message for those facing police harassment:

Most people think that if they shout about police harassment then it will get worse. I’ve found the opposite – give it right back to them and they run away. Ignore all their questions, tell everyone what happened right away, don’t get intimidated and stay radical.

Speaking to The Canary, Kevin Blowe, coordinator of the Network for Police Monitoring, was also scathing about what happened:

The police have no business targeting individuals as alleged ‘domestic extremists’ based solely on their political beliefs. Vilification of these beliefs using such a rudimentary and pejorative misrepresentation of something as complex as anarchist philosophy is political policing at its most blatant.

Blowe also has a message for anyone facing similar difficulties:

If police officers request you to ‘stop and account’ for what you are doing, you are under no legal obligation to comply. If they have genuine concerns about the ‘maintenance of peace and order’ then they need legal authority to detain and search you.

Possession of nothing more than an alleged ‘disorder ideology’ is never reasonable grounds for doing so.

The fact the police think it is okay to stop and question anyone whose ideology they don’t like is a damning indictment of the state of policing in the UK.

– Become a Netpol supporter and help them carry on with their work.

– Know your rights and attend a training to find out more.