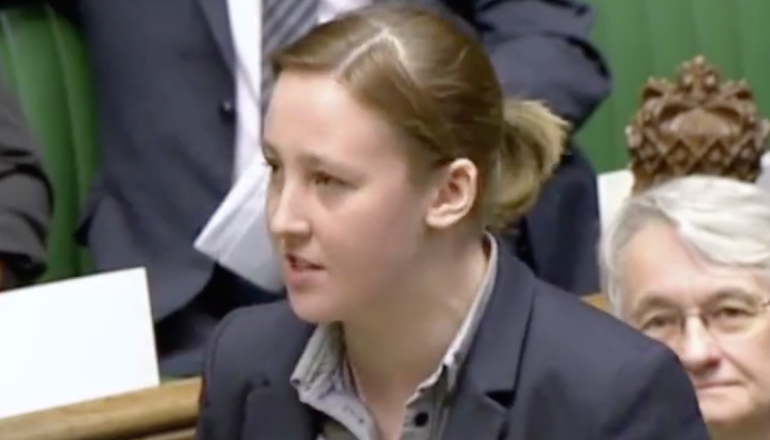 The UK’s youngest MP, Mhairi Black, has asked the one question we all want the Conservative government to answer. Speaking during an Urgent Question debate on withdrawing Housing Benefit from those under 21, Black asked:

Does the Minister agree that it is simply ridiculous that young people should suffer purely because the Government are obsessed with imposing austerity?

As The Canary previously reported, the government is planning to cut housing benefit to those under 21 from April 2017. Black described the cut as “ludicrous legislation”.

MPs were asking urgent questions about the legislation brought in without debate under a Statutory Instrument. This also means that MPs are unlikely to overturn the decision. The last time this happened in the House of Commons was 1979.

Speaking about the cuts, Black stated:

The Government seem to be working on the incorrect assumption that young people can simply stay at home, when parents have no obligation to house their adult children.

There are categories of exemptions such as for those at risk, parents, and orphans. But Black sought to clarify the numbers who would be affected:

Can she tell us how many young people will be affected who do not qualify for an exemption?

Black also raised the problems that young people who do not have stable accommodation might face:

Does she think that an unemployed young adult is more likely to get a job if they have a stable address, or if they are living in a hostel or sleeping on the streets?

Black further raised the question of how the issue will affect Scotland. She pointed out that the SNP is opposed to the legislation but it will be imposed on Scotland regardless:

The SNP has consistently opposed the withdrawal of housing benefit for 18 to 21-year-olds, but under the current powers of the Scottish Parliament, the Scottish Government cannot reverse the cut or provide an exemption for Scotland.

Will the UK Government exempt Scottish young people from the impact of the regulations and allow the Scottish Government to provide the housing support on their behalf?

But Black’s questions were pretty much ignored by the Parliamentary Under-Secretary of State at the Department for Work and Pensions, Caroline Nokes.

Nokes failed to answer the part of the question regarding austerity. Nor did she comment on the number of young people affected by this legislation. Instead, she gave a vague and unhelpful answer regarding the Scottish question:

And as pointed out by Black on her Facebook page:

Yet more cuts that Scotland didn’t vote for and no real answers from the Minister.

These are disgusting cuts brought in through the back door. They are cuts that will affect a whole generation of young people, and their parents who will be forced to support them without help. Black asked the question we all want the answer to, and the government failed to respond. It is now down to all of us to take action against the government’s austerity agenda.

–  Support the campaign against austerity.