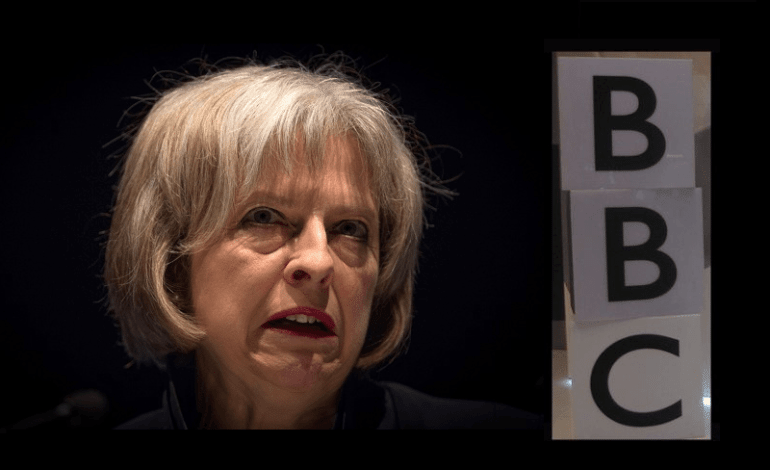 Many people are accusing the BBC of under-reporting its own scoop on the Prime Minister. A recording leaked to the BBC suggests that Theresa May has repeatedly misled parliament. The Prime Minister has consistently denied a ‘sweetheart deal’ for Conservative-controlled Surrey Council.

But the leaked recording shows a “gentleman’s agreement”, indicating the government made special arrangements for the council. Both Health Secretary Jeremy Hunt and Chancellor Phillip Hammond have constituencies in Surrey.

The BBC’s former editor expressed concern at the lack of coverage:

The scandal that keeps giving

Last month, the Surrey Council scandal began when Jeremy Corbyn ambushed May with leaked texts at Prime Minister’s Questions (PMQs). The texts suggested the government had offered Conservative Council leader David Hodge extra cash to ‘kill off’ a referendum on a Surrey Council tax hike. The council originally floated a 15% increase in council tax to pay for its adult social care crisis. The tax hike would’ve embarrassed both Hammond and Hunt.

At the time, May accused Corbyn of using “alternative facts”. And when the Labour leader raised it again in the Commons, May said:

Those claims were utterly destroyed the same afternoon, so rather than asking the same question, he should stand up and apologise.

But in the leaked recording, Council leader Hodge speaks of a “gentleman’s agreement” between himself and the government. Hodge recalls how he spoke with the Secretary of State for Local Government “in his car outside No 10 Downing Street”.

Despite being leaked the recording, many people are accusing the BBC of under-reporting the revelation:

@BBCNews. BBC Where has your story gone this morning about Theresa May's leaked tape about Surrey Council?

Didn't the BBC have an exclusive story about govts sweetheart deal with Surrey council that Theresa May apparently lied about? #Newsnight

Theresa May caught out lying again, there was a deal with "Surrey Council" anybody remember "all in it together" @BBC remain silent

Could the Prime Minister explain the difference between a sweetheart deal and a gentleman’s agreement?

In response, May continued to simply deny any deal exists. But both the leaked messages and recordings suggest otherwise. And nobody’s buying this dismissive comeback.

Listen to the audio here:

There was a Sweetheart Deal for Surrey. Dont take my word for that. Here is the full leaked audio. Listen here #PMQs pic.twitter.com/CzXQWWyc6c