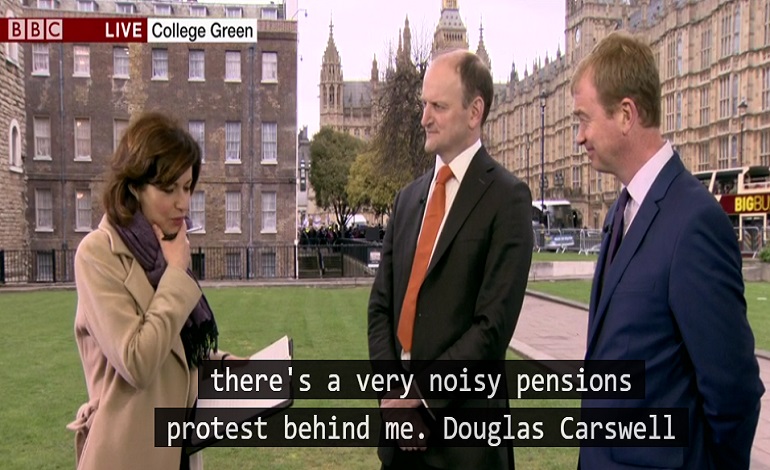 As Chancellor Philip Hammond gave his Budget 2017 speech to parliament on Wednesday 8 March, there was something rather distracting going on outside. And the media had to apologise for the interference.

The Women Against State Pension Inequality (WASPI) group was holding a demo outside parliament. Thousands of women and supporters had travelled from across the UK to raise awareness of a problem with their pensions. And they were determined to make their voices heard:

We seem to have caused a human traffic jam at Westminster.#WASPI #IWD2017 #InternationalWomensDay pic.twitter.com/yLBwlPBkyu

The BBC even had to explain to viewers what was going on:

As The Canary previously reported, parliament debated the reforms of state pensions for women born in the 1950s.

The 1995 Conservative government’s Pension Act included plans to increase women’s state pension age to 65, the same as men’s. But the government did not contact the women affected until 2009, 14 years later. At first, the government planned to slowly phase the reforms in. But in 2011, Chancellor George Osborne decided to speed up the process by several years.

Hundreds of thousands of women born in the 1950s (on or after 6 April 1951) have suddenly seen their retirement age rocket by up to six years as a result of the way the reforms have been brought in. And the women affected have had little or no time to make plans to finance the additional years without a pension.

Speaking to The Canary, WASPI said:

How can the government claim that a system is “fair” where a woman born in May 1953 now has her pension, but a woman born one year later must wait until January 2020? A fair solution will cost money, but how a government spends funds is a matter of political choice. We urge the Pensions Minister to meet with us to seek a way forward that will help our members and supporters.

WASPI is campaigning for money to be set aside to financially support all women affected by the law change. But so far, attempts through parliament to solve the problem have failed. So these women (and men) are now taking to the streets to get their voices heard. The WASPI issue is another example of austerity hitting the poorest citizens the hardest. Because the government is financially abandoning a whole generation of women. That’s why they were making a noise.