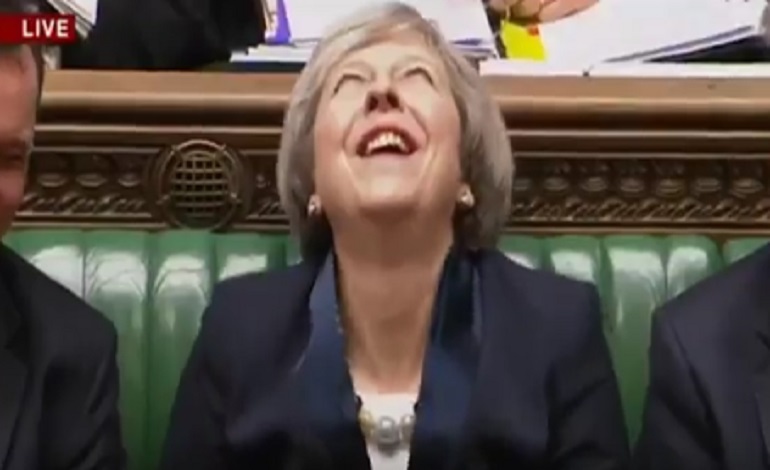 On Wednesday 8 March, Philip Hammond made an apparently off-the-cuff remark during his Budget 2017 speech. But it was possibly one of the most laughable comments of the day.

As the BBC’s Nick Robinson tweeted:

"We are the party of the NHS" claims Chancellor as Health Secretary nods vigorously. Quite a claim #Budget2017

But social media users couldn’t believe their ears and eyes:

And the Tories are breaking promises yet again! Interesting few years ahead! "The party for the NHS" I think not! Very interesting budget!

Some made comparisons with historical characters:

Others questioned the reality of Hammond’s statement:

Nope. He meant it

Many people believe the reality of the NHS under a Conservative government is very different from the one Hammond sees. As The Canary previously reported on Saturday 4 March, over 250,000 people took part in a march for the NHS.

The Canary filmed a documentary, speaking to various people about the state of the NHS today:

The event called for a:

Campaigners say [pdf] the Tories have forced the NHS to “its knees” since they came to power in coalition in 2010:

Private companies are gaining an ever greater foothold within the NHS. Years of pay restraint have seen the value of NHS staff salaries reduce by 14% since 2010. The Government’s Sustainability and Transformation Plans [STPs] are a smokescreen for a massive programme of hospital and community service closures, and are its latest instrument for privatisation.

The facts and figures seem to back up the groups’ claims:

Campaigners say STPs are secret privatisation plans. And that the government splitting the NHS into 44 areas across the country is paving the way for private companies to buy it up.

While Theresa May found much of the budget amusing, Hammond’s claim will stick in the throats of hundreds of thousands of campaigners and millions of NHS patients. And when even Conservative MPs like Sarah Wollaston attack the government for its handling of the health service, you know that the Tories really are not the “party of the NHS”.