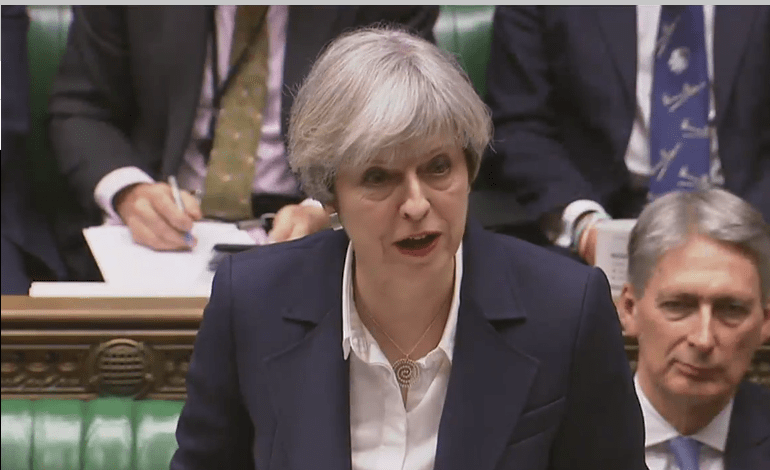 A leaked resolution from the European Parliament shows Theresa May is fundamentally lying about Article 50, on the day she invokes it.

The Prime Minister invoked Article 50, the process for leaving the EU, on 29 March. She has notified European Council President Donald Tusk by letter.

In May’s accompanying statement, she said:

This is an historic moment from which there can be no turning back.

"An historic moment from which there can be no turning back" – UK PM May on having triggered Article 50https://t.co/RZQmlW5rF9 #BrexitDay pic.twitter.com/4VOh4tc4jo

But a leaked resolution from the European Parliament shows that is simply not true:

the UK will be able to revoke its notification of Article 50 but this must be ‘subject to conditions set by all EU27 so they cannot be used as a procedural device or abused in an attempt to improve the actual terms of the United Kingdom’s membership’.

While the process is vague at this initial stage, the resolution’s guiding principles clearly state that the UK has the power to stop Article 50. So contrary to May’s statement, Britain could turn back.

72% of the EU’s remaining 27 states must accept the incoming withdrawal agreement. Then, it must pass through the European Parliament on a simple majority vote.

People took to social media to call out May’s hypocrisy in saying “there’s no turning back”:

The PM who turned from a Remainer to a Leaver said "there can be no turning back" on Brexit. Really #pmqs

When she says we will be better off, she is lying. #Article50 #BrexitDay pic.twitter.com/vPNhthZN1d

But there’s form here. The Brexit campaign was generally built on lies. Here are some of the promises:

Nigel Farage also held the British public in contempt this week. Responding to a caller on LBC radio, the former UKIP leader said:

The hypocrisy may even be startling enough to impact Farage’s support base. After spearheading an anti-immigrant campaign to leave the EU, Farage has openly admitted he would become an immigrant himself to escape the consequences. Unlike many people in the UK impacted by Brexit, the MEP will have the economic freedom to do so.

The behaviour from Farage, May and other leading politicians further confirms that these people are more interested in their own careers than the future of the UK. In saying there is “no turning back”, May is brazenly lying about Article 50 while invoking it. We cannot trust them.