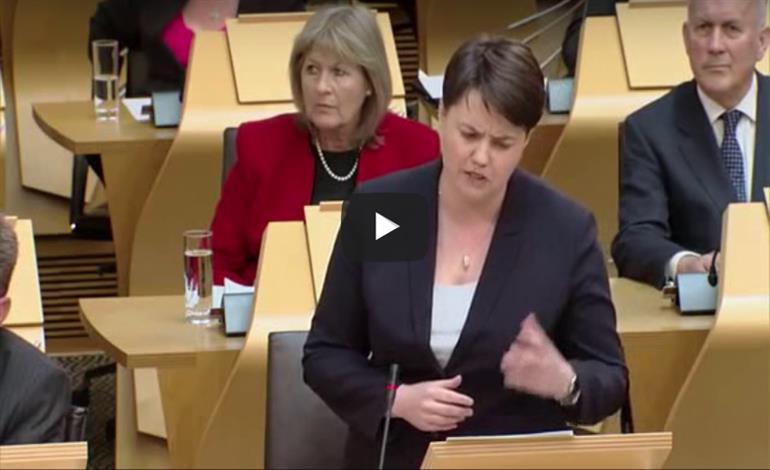 The leader of the Scottish Conservatives has been urged to apologise after mocking an SNP politician for having a Scottish accent.

Scottish Conservative leader Ruth Davidson is a divisive figure in Scotland. The Tories became the nation’s second party after the Blairite strategy of John McTernan and Jim Murphy saw Labour wiped out in the 2015 general election. In the Scottish parliamentary elections of 2016, Davidson’s Conservatives were up by 16 seats. But they were still a long way from threatening the 60-plus seats of Nicola Sturgeon’s SNP.

Scottish Conservatives are often accused of being not quite Scottish enough. Davidson’s behaviour this week will do nothing to calm those concerns. Speaking during the independence debate at Holyrood, the Scottish Conservative leader took the floor of parliament to mock the accent of an SNP rival.

There's your craven Scot Tory @RuthDavidsonMSP making fun of @JoanMcAlpine for having the insolence to speak in her own accent. pic.twitter.com/4DHTog2wz9

Reaction to the incident was immediate. Davidson has voluntarily become the caricature of the Scottish Conservative. A self-hating Scot, serving Westminster interests.

Woah,just seen video of Ruth Davidson mocking @JoanMcAlpine's accent! So embarrassed for RD who thinks she's superior due to how she speaks😳

Anger as Ruth Davidson mocks rival MSP’s Scottish accent. What a graceless person the Leader of the Opposition is https://t.co/8OKpd8LX3D

Ruth Davidson, leader of the Scottish Tories, mocked a fellow MSP during a Holyrood debate today *for having a Scottish accent* 😶😬😤

There have been calls from Scottish Greens and the SNP for Davidson to apologise for her remarks. At the time of writing, no apology was forthcoming.