It's been a great week for protest, except if you're a far right supporter [VIDEOS, TWEETS] - The Canary 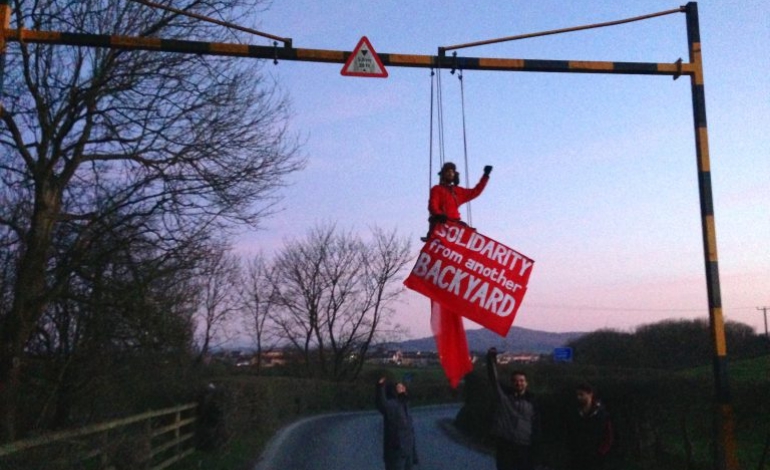 It’s been a great week for protest in the UK. From creative direct action by anti-frackers, to an attempted citizen’s arrest of a Saudi general, resistance is alive and kicking.

Fracking companies don’t exist in isolation; and we can stop the industry if we cut it off from the systems it needs to survive. By taking out the links in the chain we can break the whole industry into pieces.

And there has been a range of creative actions. Aggregate Industries, Preston New Road fracking site suppliers were the first to be targeted. A group from Bristol Rising Tide blocked entry to the site by swinging from the height restriction bars outside it. This prevented lorries entering for 11 hours.

Other actions included satirical adverts, further blockades and disrupting a trade show. Protesters also threw a party at Centrica’s head office for CEO, Iain Conn. They congratulated him on his controversial £1.4 million ‘fracker’s bonus.’ Centrica was targeted due to its 25% stake in Cuadrilla’s Lancashire operations, of which £60 million directly supports exploration work.

One of those who took part said:

We’re here at Centrica’s offices to say congratulations to Iain on his well-deserved £1.4 million fracker’s bonus. Without his company bankrolling fracking in Lancashire, the industry would be dead in the water.

Fracking may be devastating to local communities and have no public backing, but kudos to Iain for sticking with it through the tough times. Going forward, we hope Centrica continues to profit from Lancashire’s sacrifices, and that you can use your millions to shield yourself from climate catastrophe.

On Tuesday 28 March, activists prevented a deportation flight taking off from Stanstead. 17 activists from End Deportations, Plane Stupid and Lesbians and Gays Support the Migrants stopped the charter flight to Nigeria from taking off.

As The Canary previously reported, activists and passengers on the flight said deportees feared for their life. One man from Ghana said he would commit suicide if he returned; while another woman said her husband was waiting for her in order to kill her.

Unfortunately, a rescheduled charter flight was able to take off on Thursday. But this was still the first time a deportation flight has been stopped. And it shows what is possible.

Also this week, an activist tried to put a Saudi general under citizen’s arrest for war crimes in Yemen:

General Asiri was in London to talk about Yemen at a think tank on foreign policy. Sam Walton, who attempted to carry out the arrest stated:

Asiri represents a regime that has killed thousands in Yemen and shown a total contempt for international law. I tried to arrest him because of the war crimes he has overseen and propagated for, but he was surrounded by bodyguards who roughly forced me away.

According to the United Nations, 10,000 people have died in the war in Yemen. Farhan Haq, deputy spokesman for the UN general secretary stated:

This once more underscores the need to resolve the situation in Yemen without any further delay. There’s been a huge humanitarian cost.

But while resistance has been flourishing in progressive campaigns, it hasn’t been such a good week for the far right. Britain First held their April Fool’s Day march. And looked, well, foolish.

Only 300 people turned up. They had more flags than people and were protected by a large police presence:

More flags than people on the tiny Britain First march, standard. They've made their way onto Embankment followed by 8 cop vans. pic.twitter.com/mLPLqZNmXP

And some claimed they resorted to carrying three flags each to look larger:

Meanwhile, large numbers of anti-fascists took to the streets in an attempt to stop them from marching. And to let them know they are not welcome. And this is something even Paul Golding recognised:

But there’s no shame in marching against fascists.

Across the country, this week has shown resistance is alive and well in the UK. Now it’s just down to all of us to keep up the good work.

Featured image via Reclaim the Power