Councils are making it a criminal offence to be poor - Canary 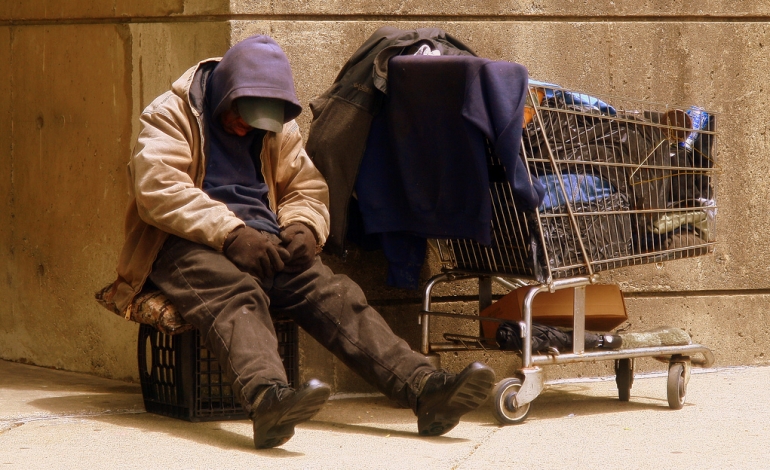 A survey published by homeless charity Crisis reveals that more than one in three councils (36%) across England and Wales are targeting rough sleepers with enforcement measures to try and force them off the street, with nowhere to go. Councils are issuing Public Space Protection Orders (PSPOs), Dispersal Orders, and Criminal Behaviour Orders for begging – simply for trying to make enough money to survive.

In short, it has become common practice to treat the poorest and most vulnerable people in society as criminals.

This shocking treatment of homeless people is nothing new. As previously reported at The Canary, Conservative-led Worthing Council voted to ban rough sleeping. South Tyneside Council, meanwhile, planned to impose £100 fines on anyone begging for food. A Tory councillor said “tramps and drunks” in Bradford city centre should be “grabbed by the scruff of the neck” and moved on. And Nottingham City Council released posters telling people to stop giving money to the homeless.

The findings from Crisis come after one petition accused Havering Council of ‘criminalising the destitute’. The council has proposed to ban begging and busking with amplified equipment in Romford.

Crisis highlights that nearly three in four (73%) homeless people had experienced enforcement in the past year. And 1 in 10 said they had been legally penalised. If that wasn’t bad enough, 81% of those who received some form of enforcement said they received no support or advice. Jon Sparkes, Chief Executive of Crisis, said:

if it [enforcement] is used against a rough sleeper for genuinely antisocial behaviour then councils and police must make sure it is accompanied by accessible, meaningful support and accommodation to help that person escape the streets and rebuild their life. Without that support, they risk further marginalising rough sleepers and making it even harder for them to get help.

Councils failing in their duty

Following the death of a homeless man in Glasgow city centre, campaigners demanded that Glasgow City Council “fulfil its duty” to provide accommodation to all homeless people. But a council spokesperson responded to protests over the death by saying:

Our street team works in the city centre every day to engage directly with people affected by homelessness and to direct them to them to available support.

Many councils are doing all they can, struggling under the pressure of budget cuts. Yet there is no denying that there’s also a widespread problem of councils showing a lack of care for those in the most unfortunate circumstances. Society is treating homeless people as a nuisance. We need to treat them as human beings in need of help.

Correction: This article was updated at 1600 on 3 April. The survey was carried out by Crisis, not Shelter.