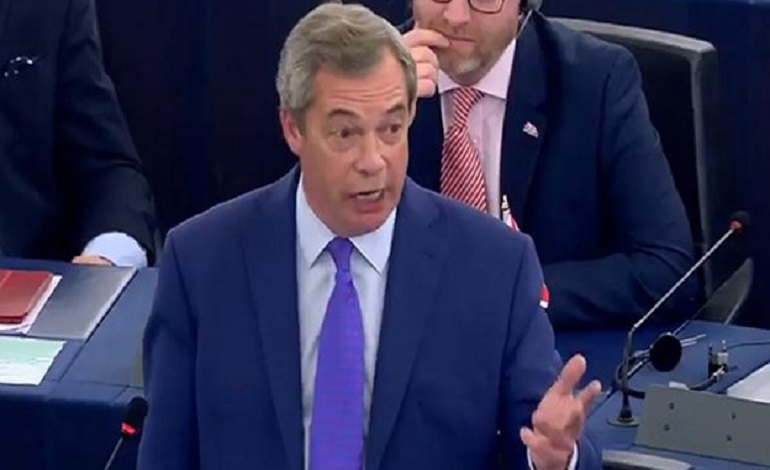 On Wednesday 5 April, Nigel Farage stunned the EU parliament with a rant about the Brexit negotiations.

I’m gonna make him an offer he can’t refuse

MEPs were debating the Brexit negotiations. The discussion centred around the EU’s red lines for a British withdrawal agreement in two years’ time. Many MEPs were saying that the UK would not be able to enjoy the same privileges as member states after Brexit. But Farage wasn’t happy with this. He launched a scathing attack on the EU, saying it was holding the UK to “ransom”.

As far back as I can remember, I always wanted to be a gangster

He said that the UK was a “shareholder” in the EU, including the parliament building, because “we put, net, over 200 billion sterling into this project”. He went on to say the EU should be making the UK “an offer we can’t refuse”. Farage then went on to say the EU was “behaving like the mafia”, because:

The parliament’s chief negotiator… tells us that we cannot discuss potential trade deals with anybody else in the world until we’ve left the European Union. That has no basis in treaty law, whatsoever… And of course, Mr Tusk, who is not with us today – I expect he is still crying, he looked pretty tearful didn’t he after the British ambassador delivered [the Article 50] letter last week? – he tells us… that any future trade deal must ensure that the UK is not allowed to have a competitive advantage.

Now go home and get your fucking shine box

But many MEPs were unhappy with Farage’s comments. The parliament’s President, Antonio Tajani, said his comments were “unacceptable”. And he told Farage to retract them. To which the former UKIP leader said:

I do understand national sensitivities [Tajani is Italian] so I’ll change it to ‘gangsters’.

Just when I thought I was out, they pull me back in

Farage saying that the EU is “vindictive” and “nasty” is almost laughable, after a campaign by himself and other Brexiteers last year that bordered on the racist and xenophobic. Understanding “national sensitivities” is hardly Farage’s strong point, either. But for him to say of the EU “thank goodness we are leaving” has to strike one as odd. As it will mean that he and his UKIP colleagues will all be out of a job. Not that Farage probably cares. As he has the lowest voting record of any MEP. So while he may be glad to see the back of the EU, the feeling is probably mutual.