The Daily Mail hoped it would get away with its latest racist cartoon on a technicality. Nope [IMAGE] - Canary Workers’ Co-op 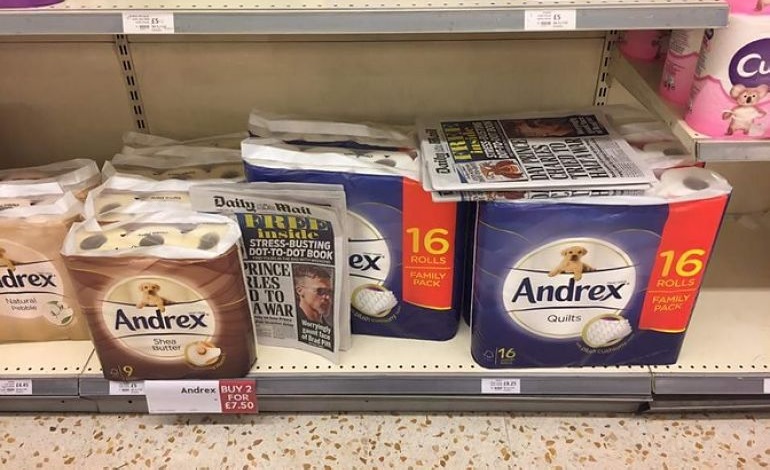 The Daily Mail published another sick and racist cartoon on 4 April. And on this occasion, it was surely hoping to get away with it on a technicality. But people weren’t about to let that happen.

Awww, look at the monkeys…

Due to Brexit, there’s been lots of talk about a potential rift with Spain over the status of Gibraltar. And by ‘talk’, we mean the UK’s political and media class threatening to set the Royal Navy on Spain unless it does what it’s told.

And war-hungry, EU-bashing, migrant-hating tabloids were quick to join the sabre-rattling frontlines of the dispute. On 4 April, The Sun humiliated itself by running a story headlined “Up Yours, Senors!” alongside an advertisement for cheap holidays in Spain.

But The Daily Mail decided to go down a depraved route, rather than the imbecilic one picked by Murdoch’s rag:

The cartoon carries the title “War with Spain over Gibraltar” and shows monkeys piling on to a ship containing two crew members and a captain, who is looking at a map of Gibraltar. And there are many more monkeys heading to the ship, in dinghies behind. It carries the caption:

Captain. About those hundreds of boat people you spotted desperately fleeing before a possible war – guess what?

But The Daily Mail‘s cartoon leaves nothing to guess. We see from the image that the many “boat people” fleeing the potential war are, in fact, monkeys.

The Mail‘s ‘get out of racism free’ card

Exactly how The Daily Mail expected to worm its way out of this obvious bigotry was pointed out on Twitter:

I loathe the DM, but aren't those supposed to be Gibraltan Barbary macaques? That's Gibraltar in the back. A weak joke, but not racist.

But the potential innocence of The Mail‘s ‘joke’ was quickly challenged:

Yeah, I think it's Gibraltar-related. Bracketing the monkeys leaving the rock with migrants crossing the Mediterranean seems racist to me.

And The Mail, of course, has form when it comes to discriminating against people by comparing them to animals:

Not for the first time, @DailyMailUK has today chosen to show it's true racist colours in cartoon form@LBC #r4today #Gibraltar pic.twitter.com/Mflz2SEYMO

No matter what way you look at this cartoon, it’s despicable. That’s true, of course, if it is an attempt to equate people from Gibraltar with monkeys. But it’s also truly shocking that, amidst a refugee crisis – where images of people crammed into dinghies in dangerous ocean conditions are the norm, The Mail didn’t twig that a comparison would be drawn. Or that it did, and thought it would be funny regardless.

And that’s aside from the fact that it’s having a good old chuckle at the idea of an unnecessary conflict starting that, as its cartoon acknowledges, would result in the loss of habitat for all those involved – macaques included.

Truly, The Mail has sunk low this time. So low, in fact, that a Twitter user suggested there’s only one thing left to do with the tabloid:

The best thing to do with @DailyMailUK pic.twitter.com/p2hkD2DYG5

He may well be right.