Croydon is sending a loud, clear message to the attackers of the Kurdish teenager - Canary 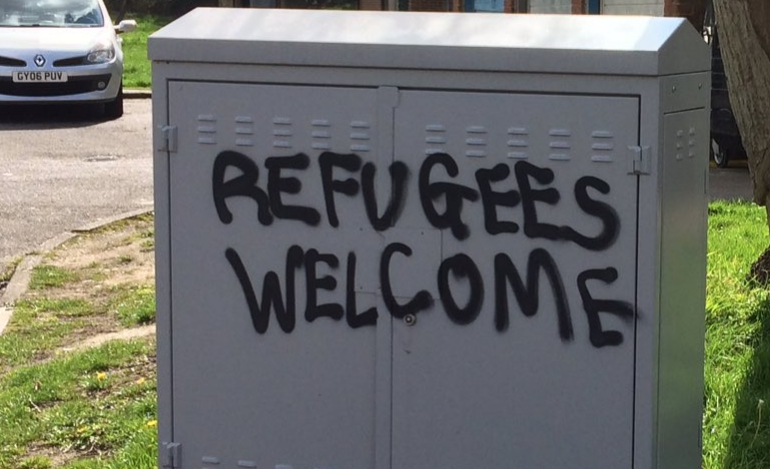 Anti-racist graffiti has appeared in Croydon in response to the attack on teenager Reker Ahmed. And it has a clear message: refugees are welcome.

The following tweet shows graffiti on the road where Ahmed was attacked:

Graffiti in Croydon on the road where a 17-year-old asylum seeker was attacked by a group. pic.twitter.com/9YvEs8zLGR

Other nearby places carried a similar message:

And other slogans are statements against racism:

Others hinted that refugees will be protected:

Graffiti backing refugees has appeared in #Croydon after a teenage asylum seeker was beaten up in a suspected hate crime. pic.twitter.com/5713dwq312

The appearance of the graffiti was even supported by the local Conservative MP. Housing minister Gavin Barwell described the attackers as “scum”. He also tweeted:

I don't generally approve of graffiti but saw this in Shrublands today… pic.twitter.com/DkRQlivtjq

The other thing that I would say is that what happened here is not representative of this community and that Croydon is one of the most diverse bits of London and people of different backgrounds get along very well.

A group calling itself “Angry Croydonians” claimed responsibility for the graffiti. A press release seen by The Canary stated:

We carried out this action as a clear message from the community, but also as a message to the perpetrators.

And they have a very strong message:

We will not stand by as migrants are scapegoated and brutalised, encouraged by the fascist rhetoric of governments and their right-wing media vanguard.

We will not allow immigration enforcement to abduct people from our communities and sentence them to deportation and death.

We will certainly not be intimidated in the face of Brexit Britain and the toxic resurgence of far-right politics.

We shall respond duly to all of these threats and the violence they inflict on our communities.

And they are clear that:

Not in our name

Up to 30 people allegedly attacked 17-year-old Ahmed. The police have charged five people with violent disorder. Ahmed suffered a fractured skull and a blood clot on the brain following the attack. He is now out of intensive care. But as DCI Jane Corrigan stated, he is “very lucky not to have lost his life”.

But people are coming together to show solidarity with Ahmed. Over £43,000 has been raised on one Just Giving site. And another one has raised over £3,000.

Words or money won’t help Ahmed recover, but they do show solidarity. And they do send a clear message: the attackers were in the minority. The majority of people in this country are not filled with hate; and they will not tolerate hate crimes like this.