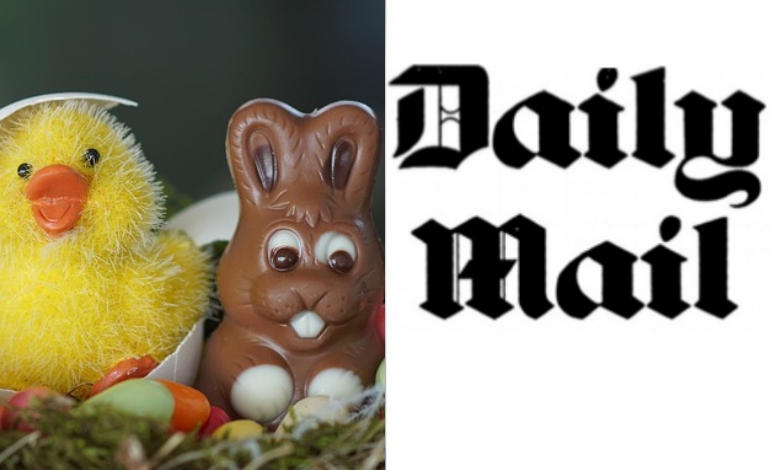 Easter messages have started appearing in Marks & Spencer (M&S) outlets across the country. They call on M&S to #StopFundingHate, by ceasing to place adverts in The Daily Mail.

This tidal wave of migrants could be the biggest threat to Europe since the war.

And the back parodies one of M&S most famous slogans:

Customers are then asked to email Steve Rowe, the CEO of M&S. And the leaflets have been sent to 40 local groups across the country.

Global Justice Now is taking the action because of the hate-filled headlines and stories run by the paper. Its press release states:

A recent United Nations report singled out the UK’s media as being ‘uniquely aggressive in its campaigns against refugees and migrants’, and hate crimes across the UK rose by 100% in the months following the EU referendum result.

Marks and Spencer proudly proclaims its ethical business credentials and presents itself as a socially responsible company. So why are they associating themselves with newspapers that promote hate?

The tidal wave of hatred and mistrust of migrants and refugees in the UK is being stoked and encouraged by purposefully selective and insinuating reporting from newspapers like the Daily Mail. This has huge and real consequences, from the often-violent hate crimes that migrants face on the streets of the UK, through to the child refugees in Calais that the government has decided to abandon.

The group has also released a video:

The leaflets have appeared in a range of Easter products: 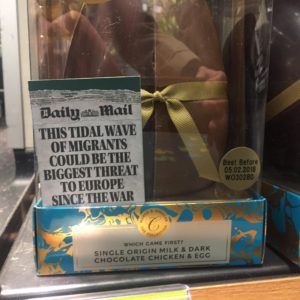 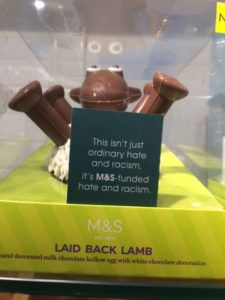 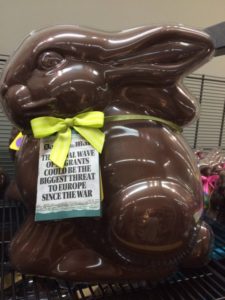 But it’s not just chocolate that’s been targeted:

Global Justice Now is also encouraging people to take action on social media. It is asking that:

It asks people to post #StopFundingHate-related images of the company’s most popular Easter egg this year:

Laid Back Lamb is the most popular M&S Easter egg this year. Follow these instructions to add an image of the lamb holding a #StopFundingHate flag to their Facebook page. 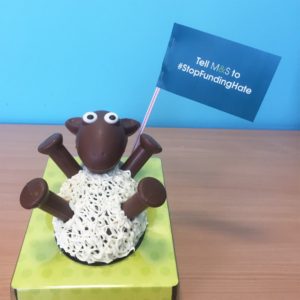 The #StopFundingHate campaign, of which this is an offshoot, is gaining momentum. In November 2016, Lego withdrew its advertising and promotions with The Daily Mail. And the Co-op is currently reviewing whether it will continue its advertising.

This campaign is hitting The Mail where it hurts. In the pocket. And it is sending a clear message that people will not tolerate the message of hatred it is peddling.

– Join in the Easter action.

– Sign the petition to stop M&S advertising in The Mail.