Boris Johnson came out of hiding to attack Corbyn. It didn’t go well for him. - Canary 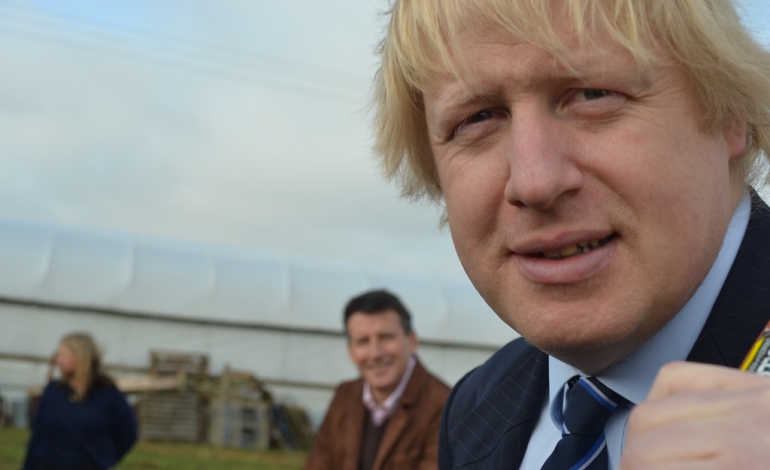 Boris Johnson has come out of hiding to make incomprehensible insults and repeat lies about Labour leader Jeremy Corbyn. The misinformation was lapped up by the mainstream media. That is, until Johnson actually spoke to them directly, and then things began to fall apart.

Writing in The Sun, Johnson claimed about Jeremy Corbyn:

They watch his meandering and nonsensical questions and they feel a terrible twinge of human compassion. Well, they say to themselves: he may be a mutton-headed old mugwump, but he is probably harmless.

But in criticising Corbyn, Johnson also repeated a lie. He stated:

As for the fight against Islamist terror, Corbyn has said he would not shoot to kill – even when innocent life is at stake. What kind of protection is that?

But Corbyn’s shoot-to-kill comments were misinterpreted by the BBC. Laura Kuenssberg was found by the BBC Trust to have misreported his comments. The trust stated that it:

was wrong in this case to present an answer Mr Corbyn had given to a question about ‘shoot to kill’ as though it were his answer to a question he had not in fact been asked.

To begin with, the mainstream media lapped up Johnson’s comments. The BBC Radio 4 headlines at 6am led with:

Boris Johnson has made a scathing attack on Jeremy Corbyn.

And the broadcaster reiterated Johnson’s assertions that Corbyn is a “threat to national security”. But blustering nonsense and Etonian insults that the majority of the population cannot understand do not make a “scathing attack”. However, he got away with it, and the coverage was, for the most part, positive.

But then it all went a bit wrong…

Having come out of hiding to make headline news, Johnson then decided to speak to the media. And that’s where it all started going a bit wrong. His 20-minute interview [2:10:45] with John Humphrys on the Today programme was a car crash from the moment it started.

Humphrys began by questioning Johnson on his integrity, especially his use of the discredited figure of £350m paid to the EU every week; and his claims that this money would be spent on the NHS. But Johnson refused to admit that the figure was wrong:

£350m expresses the total we do not control every week.

Humphrys repeatedly challenged him, stating that “we get half of it back” and “it is about trust… We were fed misleading information”. But Johnson repeatedly talked over Humphrys, exasperating the presenter, and even claiming that listeners weren’t interested in his lies:

Our remaining listeners will have heard me explain that figure many many times, and it’s correct.

And Johnson felt the further need to insult listeners in the interview:

There may be listeners who aren’t aware there’s an election on.

But it was Johnson’s comments on Syria that were both terrifying and showed exactly why Theresa May would prefer he was kept in a cupboard for the entire election campaign.

Asked about Trump’s recent bombing of Syria and whether the UK would support further similar attacks, Johnson replied:

But if the Americans were once again to be forced by the actions of the Assad regime – don’t forget, it was Assad who unleashed murder upon his own citizens with weapons that were banned almost 100 years ago – if the Americans choose to act again and they ask us to help, as I say, I think it would be very difficult to say no.

Crucially, Johnson wouldn’t rule out bombing Syria without the backing of parliament. When asked directly whether MPs would get to vote, Johnson stated:

I think that needs to be tested. I think it would be very difficult for us to say no.

This was a game changer, and rightly so. And subsequent BBC headlines turned from his attack on Corbyn to:

Johnson: Difficult to say ‘no’ to Syria strike.

Sky News reported it as:

Johnson asserted in his Sun piece that Corbyn “poses an extreme danger to the country”. But it is Johnson who is the real threat. Not only do we have a Foreign Secretary who is prepared to lie repeatedly; he has now suggested he would be prepared to take military action without the backing of parliament.

Meanwhile, Labour has a leader who backs peace, who wants to negotiate rather than bomb. A politician who has spent his entire political career arguing for peace. Corbyn is not a threat to national security, but he does offer a clear alternative to war-mongering. And it’s one we should all want to take.