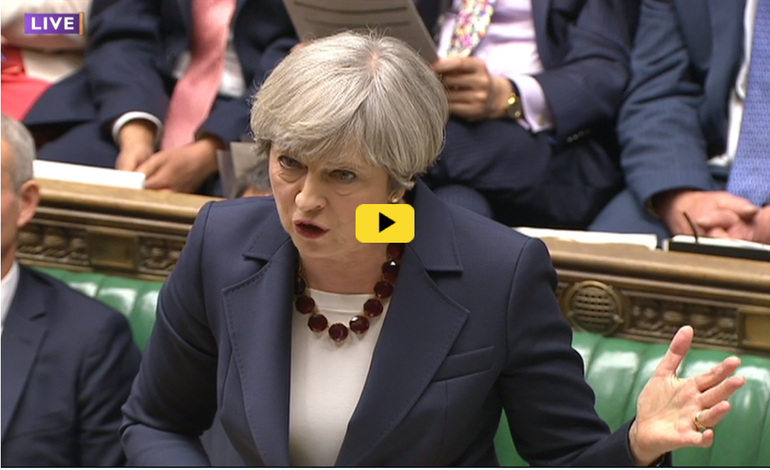 Just weeks from a general election, Theresa May has essentially described rape as a lifestyle choice. The comments underscore her reputation for callous disregard of those facing the toughest life circumstances.

During Prime Minister’s Questions, SNP MP Christopher Stephens asked the Prime Minister to think again about her ‘rape clause’ policy. The government now requires women on welfare to ‘prove’ they were raped in order to claim child benefit for a third child. At the point in a woman’s life where she has been raped and has faced the decision to proceed with the pregnancy – she then faces a grilling from untrained staff at the Department of Work and Pensions.

Imagine receiving this in the post… How would you feel? #RapeClause pic.twitter.com/X6e2e8rpmJ

But May’s response was chilling in its disregard for rape victims. After a rambling introduction to her answer, May told the House of Commons:

We know that what the SNP want to do is scrap the policy in its entirety.

By definition, a survivor of rape has not made a lifestyle choice. A rape survivor has hardly had the chance to perform a cost-benefit analysis of her situation. The Prime Minister’s response was tone-deaf. It dismissed the lived experience of rape survivors, and the tough decisions they face.

Theresa May was finally forced to defend the Rape Form she makes victims fill for benefits. Her response is chilling pic.twitter.com/SNFR0goeWB

All opposition parties oppose the so-called rape clause. During a debate in the Scottish parliament earlier in the week, First Minister Nicola Sturgeon said:

The rape clause is wrong in principle. The Equality and Human Rights Commission… said just at the end of last week that because of this policy there is a clear re-traumatisation of rape survivors. No woman, no woman anywhere, should have to prove she has been raped in order to get tax credits for her child. And I actually can’t believe that in 2017 I am having to stand up in the Scottish Parliament and make that argument.

Labour in England, Scotland and Wales have also denounced the plans.

In case you missed it, watch @KezDugdale stand up to the awful Tory "rape clause" in a powerful speech to Holyrood https://t.co/oMyoycMR9s pic.twitter.com/qs4tksS1Ia

Plaid Cymru in Wales, the Green Party, and the Liberal Democrats have all voiced opposition, too.

The rape clause only exists thanks to a Conservative majority in the House of Commons. But on 8 June, UK voters can do something about that.

– Continue to lobby your MP and note your opposition to austerity including the cap on tax credits and ‘rape clause’ by signing a petition.