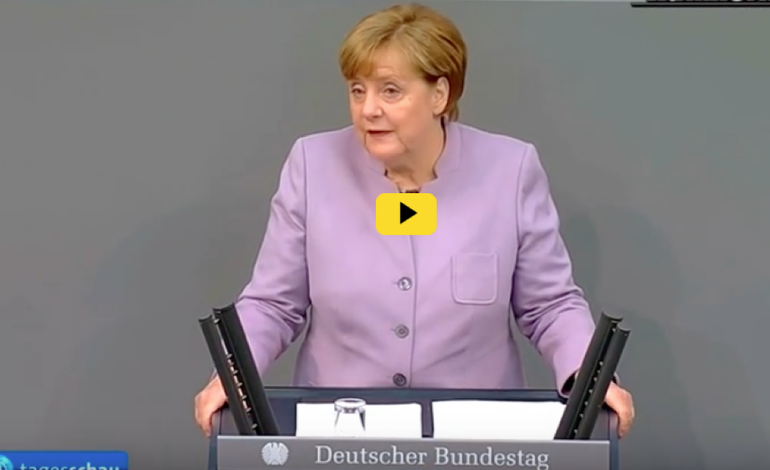 German Chancellor Angela Merkel has delivered a Brexit address to the Bundestag (Germany’s parliament) in which she denounced Theresa May’s Brexit plan as pure fantasy. The comments come at a bad time for the UK Prime Minister, whose election campaign has had a faltering start.

Some people in the UK are suffering under illusions. A third-party state will not have the same rights or even superior rights to a member state.

This may sound self-evident, but I have to say this because some in the UK seem to have illusions on this point. And to disagree on this point would be wasted time.

This directly contradicts Theresa May’s Brexit plan, which states that the UK will gain a deal as good or better than current trading agreements. In short, Merkel has denounced the Prime Minister’s plans as fantasy.

Merkel’s words come ahead of a meeting of the 27 nations of the European Union on Sunday 29 April. At this meeting, the countries will agree their collective bargaining position with the UK over Brexit. The summit was called in response to May’s decision to trigger Article 50 and begin the UK’s two-year countdown to Brexit. A decision Merkel states is now “irreversible”.

Electing Theresa May as Prime Minister on 8 June means rubber-stamping a hard Tory Brexit from the European Union.

In order to protect Britain from the losses associated with leaving the single market, the May government has essentially confirmed it would turn Britain into a tax haven – cutting corporation taxes radically to attract business. May has also campaigned to withdraw Britain from the European Convention on Human Rights, looking at a departure date of 2022. And the Prime Minister has steadfastly refused to guarantee working people’s rights after Brexit. The rights that May is casually abandoning are the rights that ensure us all a minimum wage, maximum hours, and safe workplaces. They are the rights that all but ended sweatshop/workhouse conditions in the UK. Yet these rights may well end up on the chopping block as May courts corporations to stay in the country.

It’s time for Britain to decide. Is this really the future we want?