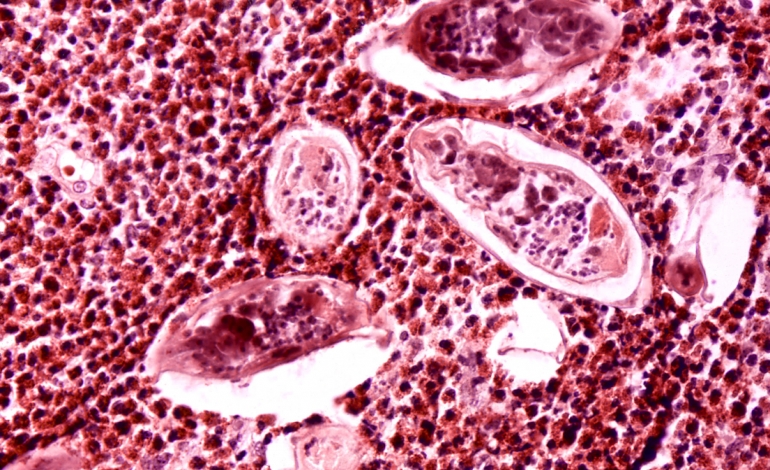 Dr Dhekra Annuzaili, a Yemeni doctor, is the first ever winner of the Women in Focus Exceptional Service Award. Her work on neglected tropical diseases (NTDs) in Yemen is helping to save lives and combat the ingrained sexism in her country. Gender inequality in many countries often increases the danger posed by NTDs. The Women in Focus Awards were set up to recognise the achievements of women in this crucial area of medicine.

Dr Annuzaili started her work on NTDs in 2009. She has provided support to Yemen’s national program on controlling schistosomiasis and intestinal worms.

Schistosomiasis is a disease caused by blood flukes (trematode worms). People become infected when the parasite larvae – released by freshwater snails – get into the skin during exposure to infested waters.

In the body, the larvae develop into adult worms. They live in the blood vessels, where the females release eggs. The body’s reaction to the eggs is what causes the symptoms, which include enlargement of the liver and spleen. The disease disables more people than it kills.

Dr Annuzaili’s achievements are impressive, given that Yemen is a war-torn country. It’s experiencing famine, economic collapse, malnutrition, and insufficient supplies and staffing at hospitals.

The prize awarded to Dr Annuzaili underscores the important role that women play in tackling this disease. It was no easy feat to make such massive strides in her career considering the state of gender inequality in Yemen.

The Global Gender Gap Report 2016 [pdf, p19] highlighted Yemen as the worst performer when it comes to gender equality. Around 70% of women in Yemen can’t read or write. This is roughly double that of men. There is also a massive gap between men and women when it comes to employment and opportunity, health and survival, and political power.

Women in Yemen are denied basic human rights. 48% marry by the age of 18, with many women marrying as young as eight years old. Women cannot marry without the permission of a male guardian. Nor do they have any rights when it comes to custody, divorce, or inheritance. And if Yemeni women want to travel, they will also need permission from a man (their father or husband).

Sexism is deeply embedded in Yemeni society. But Dr Annuzaili overcame all of the obstacles that are designed to hold her back. Given the circumstances, it’s no understatement to say that her achievements are inspirational.

The freedom of women in Yemen and development in the country go hand in hand. When half the population can’t work or study, then the economy and people’s health will suffer. The work of Dr Annuzaili, and other Yemeni women who are tackling tropical diseases, shows that progress is always possible.

– Check out more articles from The Canary on Yemen.