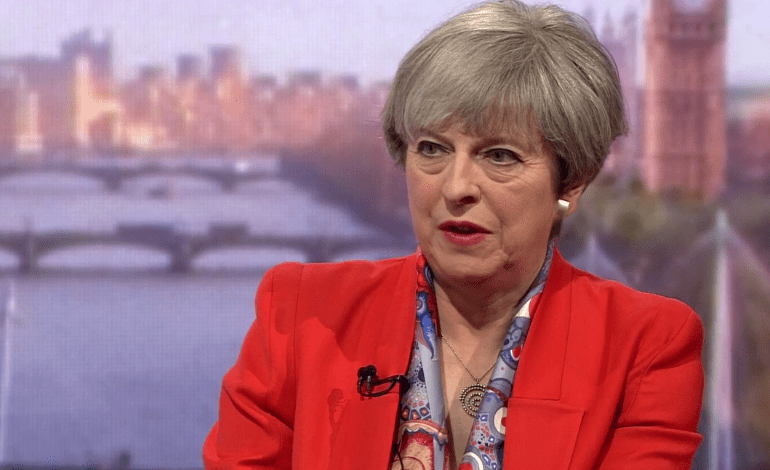 Millions saw Theresa May’s campaign crumble after one simple observation from Andrew Marr. May will defend Britain, while Jeremy Corbyn is a national security risk … right?

That’s the Conservatives’ flagship electoral posturing. But viewers of Marr saw that the narrative couldn’t last past a brief glance at recent history. The host pointed out:

And you have raised again and again the question of Jeremy Corbyn. Can I put it to you that when it came to one of the important votes that we’ve had in recent times, on the Iraq war. Whatever you think of Jeremy Corbyn, he was on the right side, looking at history, and you were on the wrong side. You went into the voting lobbies behind Tony Blair and voted for the Iraq war, which had so many disastrous consequences. And he did the unpopular thing and stood out against it.

The Prime Minister had nothing to say in response. The volley of irrelevant generalities and slogans made that clear:

If we look at the choice at this election, the choice people will be making is who do they want to see as Prime Minister… What Jeremy Corbyn has shown is that he’s not prepared to stand up for the defence of this country…

But, as Marr points out, Corbyn has shown the opposite. Before the war in 2003, the Labour leader warned:

It will set off a spiral of conflict, of hate, of misery, of desperation that will fuel the wars, the conflict, the terrorism, the depression and the misery of future generations.

The rise of Daesh (Isis/Isil) was a direct result of the Iraq war May voted through. The extremist group grew support in opposition against the invasion and the occupation that followed. As well as establishing Daesh, the war led to the death of around 1 million Iraqis. And it destabilised the region – the roots of the refugee crisis.

On top of what Marr called the “disastrous consequences”, May swallowed the false pretext for the Iraq war. It was based on Tony Blair’s ‘dodgy dossier’ – a sham paraded as conclusive evidence across the media.

Those who don’t learn from history are doomed to repeat it. The Conservative government’s unflinching support for Donald Trump brings May’s foreign policy into serious question. Under May’s leadership, there’s little chance of ending the cycle of perpetual war. Meanwhile, Corbyn has shown foresight on many issues, including Iraq and Libya. That’s why the narrative that May is a ‘safe pair of hands’ crumbled at one simple observation from Marr.