Theresa May goes door-knocking in Scotland, and it's even more awkward than you'd expect [VIDEO] - Canary 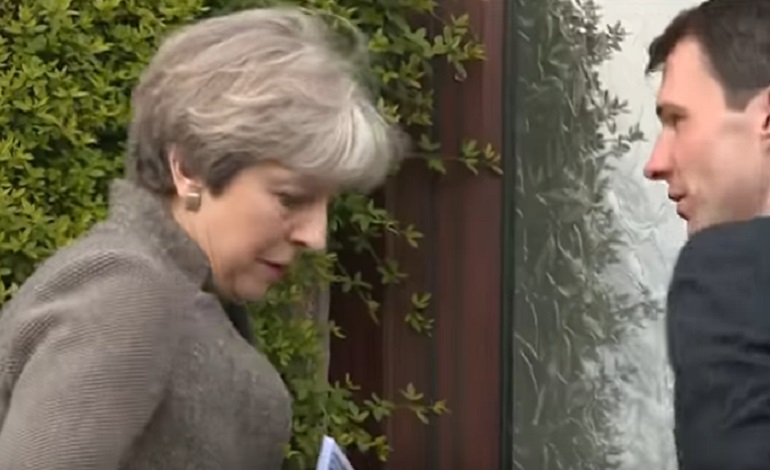 By all accounts, Theresa May did not have the best of bank holiday weekends. Because, aside from some less than impressive TV interviews, her attempts to meet the public on their doorsteps didn’t go according to plan. And sadly for the Prime Minister, Sky News caught it on film.

May was out door-knocking in Aberdeenshire at the weekend; brave in itself as the SNP dominates the area. But things didn’t go well for the PM. And Sky News caught the whole thing on camera:

May on the ropes

Overall, it was not a good weekend for May. As The Canary reported, Andrew Marr left her floundering on Sunday 30 April. He said:

And you have raised again and again the question of Jeremy Corbyn. Can I put it to you that, when it came to one of the important votes that we’ve had in recent times – on the Iraq war, whatever you think of Jeremy Corbyn he was on the right side – looking at history – and you were on the wrong side? You went into the voting lobbies behind Tony Blair and voted for the Iraq war, which had so many disastrous consequences. And he did the unpopular thing and stood out against it.

The PM had nothing to say in response, except:

If we look at the choice at this election, the choice people will be making is who do they want to see as Prime Minister… What Jeremy Corbyn has shown is that he’s not prepared to stand up for the defence of this country…

This accusation came in spite of the fact that there is currently a funding crisis in the British army. And in spite of the fact that, since the Conservatives came to power in coalition in 2010, police forces across the country have suffered major cuts, leaving us with 20,000 fewer police officers than we had in 2009. The Association of Police and Crime Commissioners, meanwhile, suggests that police staffing levels could reduce by a further 17% by 2020 – to the lowest level since the mid-1970s.

May has been repeatedly accused by the media and the public of being “missing” in this election campaign. So we should really give her credit for at least trying to go out and meet voters. But as the people of Aberdeenshire showed, maybe it’s best the PM just stays indoors from now on.