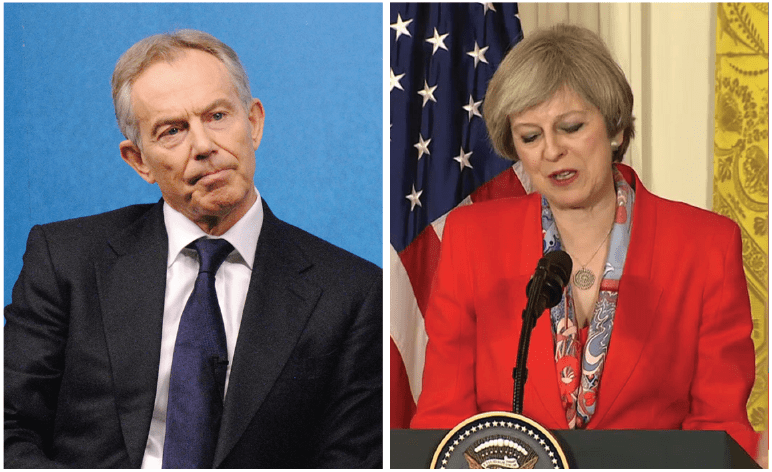 In a new interview with The Observer, Tony Blair has once more condemned Labour’s current direction as being “hard left”. The same interview sees Blair referring to Theresa May as “sensible”, “reasonable”, and “mainstream centre-right”. And this dismissal of Labour’s current policies, combined with the whitewashing of May’s record, shows just how far ‘mainstream’ politics has swung to the right.

Speaking to The Observer, Blair says:

[May is] in many ways a reasonable, sensible person, mainstream centre-right politician.

The trouble is, she’s a reasonable person delivering an unreasonable policy in the case of Brexit.

And it’s clear that Blair really isn’t on board with May’s stance on Brexit:

Yet it’s difficult to see how any Labour politician could respect May. Her record in politics and government speaks for itself.

This is how May voted on social issues: 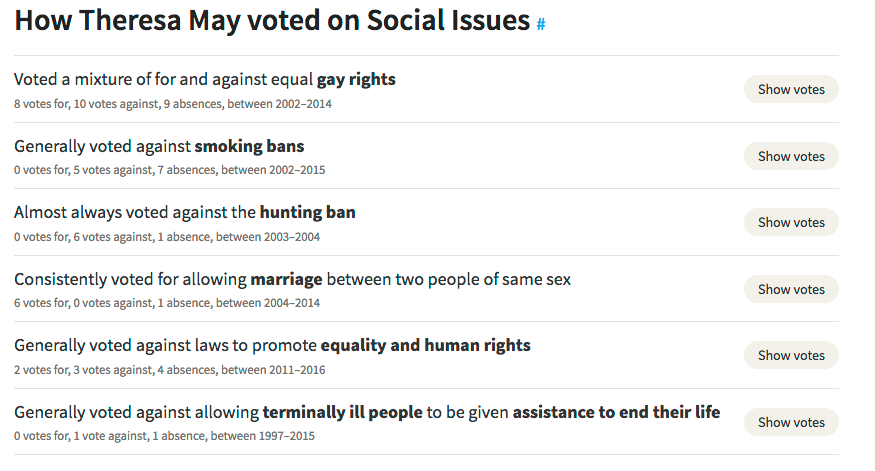 One thing of note is that in many instances Blair’s and May‘s voting records are in complete opposition to one another. And yet there are areas where the two converge.

Both almost always voted for the use of UK military forces in combat operations overseas. Both consistently voted for the Iraq war. And both Blair and May have been involved with the creeping privatisation of the NHS.

Blair and May have also supported negative attitudes towards immigration. The controversial Yarl’s Wood detention centre and others were built when Blair was Prime Minister. Emma Mlotswha of Medical Justice described Yarl’s Wood as “a continual cycle of horror stories that have been disbelieved.”

[Former Home Secretary] David Blunkett is relying on a climate of fear to push through a scheme which will not guarantee our security. In reality, ID cards are likely to give rise to discrimination through increased identity checks against ethnic minorities suspected of being terrorists or illegal immigrants.

May’s attitude towards migrants is best summed up by the much-criticised ‘go home’ vans. Vans which were also commonly referred to as the ‘racist vans’. Former Shadow Home Secretary Yvette Cooper described the vans as “borrowing the language of the 1970s National Front.”

Although these vans weren’t really out of character with May’s record as Home Secretary.

Our country is reliant [paywall] on an influx of foreign workers. But successive New Labour and Conservative governments haven’t just encouraged migrant workers to come here. They’ve done so while simultaneously encouraging the public to be wary of them.

Although Blair still doesn’t accept responsibility for his part in creating this toxic attitude, he does understand the issue. This is what he said in the same interview in which he described May as sensible:

If we stop all these European migrants coming, we’ll just have to find a different way of getting them in because we need them for our economy.

This is why UKIP supporters talk of ‘betrayal’ by New Labour and the Conservatives. ‘Betrayal’ being a very dangerous narrative in politics, as it’s one that far-right politicians have been very successful in capitalising on. Donald Trump’s warped anti-establishment message being the most recent example.

Ultimately, the fact that Blair thought May was ‘reasonable’ up until now betrays his own politics. And the fact that he still doesn’t understand how we got to this point shows why Britain needs a clean break from the toxic legacy he left us.