No wonder Theresa May went into hiding, her interview with Marr was an absolute car crash [VIDEO] - The Canary 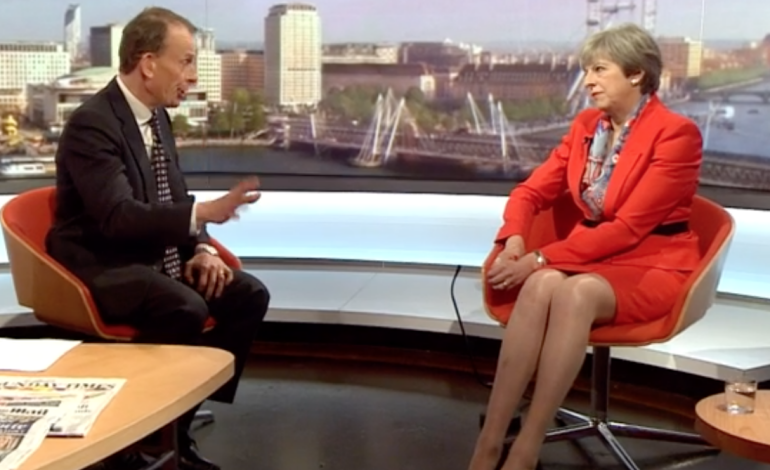 Theresa May gave her first proper media interviews of the election campaign on Sunday 30 April. And her interview with Andrew Marr was such a car crash that it showed why she went into hiding.

Throughout the interview, May failed to deliver any clear vision of what another Conservative government would mean for ordinary people.

We have nurses going to foodbanks at the moment. That must be wrong.

Marr continued to press her:

The problem they have is they haven’t got enough to eat at the moment.

But May still didn’t have an answer:

You’re only going to be able to do this if you have a government that understands the importance of that strength in the economy.

Can you answer a question, Theresa May?

May was unable to give a straight answer on most of the topics put to her. Marr tackled her on changes in welfare for working people. He stated:

Again [let’s talk] about working families. There are lots of benefit cuts in the pipeline. If they were introduced now then 3 million households in this country would be on an average £2500 worse off.

We have made changes to welfare as a Conservative government… but I also want to see a welfare system that is helping to encourage and see people getting into the work place. I think work is the best route out of poverty.

These are working families I’m discussing.

Yet May continued to ignore the fact that working families have suffered under a Conservative government. And she refused to answer the question.

Marr also challenged Theresa May on her education record:

In England, primary schools are facing a £3bn pound cut by 2020 and lots of parents watching this programme are well aware that parents are having to come in and fill in for classes where there aren’t enough teachers… there are raffle sales for books… Is there any prospect of change if people vote for Theresa May as Prime Minister?

Let’s look at actually what is happening in education. We said that will protect the core schools budget and we have done that…

So, let’s look at what’s “actually happening in education”. Even outstanding schools are having to send begging letters to parents because of a lack of funding. And hundreds of schools across the country have written to parents highlighting the impact of cuts. These impacts include less teachers and support services.

But May just repeated platitudes that have no bearing on what teachers, parents, and pupils know is the reality of the situation in classrooms across the country. Meanwhile, reports from the National Association of Head Teachers conference state that schools are considering a four and a half day week to cope with the funding crisis. And head teacher Graham Frost described the government’s statements on education as being like a “recorded message”.

And there were other issues on which May refused to give a clear answer. Once again she refused to rule out abolishing the triple-lock on pensions. And she refused to guarantee that there would be no hike in national insurance or VAT:

Marr asked her directly whether the triple lock on pensions was “still safe”. May refused to answer directly:

Under a Conservative government, the state pension will still go up every year… Exactly how we calculate that increase will be for the manifesto.

That suggests the triple-lock is not safe. It’s an indication that May’s government could go after pensioners with the same ferocity that it’s attacked the rest of the welfare state.

Question after question showed May to be anything but a “strong and stable” leader. She was challenged on her record in a number of key areas and was unable to give a clear answer. She obfuscated and avoided the questions. And she looked awkward and nervous throughout. It’s clear she can’t justify either her prior record or her future plans.

The Conservative government has let down a vast swathe of the population. From nurses forced to use foodbanks, to schools having to beg to fund teachers, to what’s looking like a potential attack on pensioners. May’s car crash interview shows she has no answers for any of us.