As 8 June approaches more than 100,000 people have now stuck it to the Tories [IMAGES] - Canary 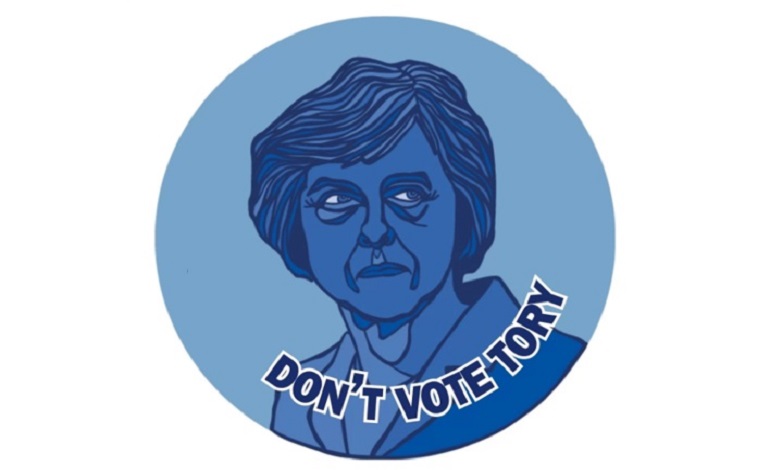 A campaign group is calling on everyone to ‘stick it to the Tories’ at the upcoming general election. And 100,000 people have already heard its message. But it’s calling on more people to get involved. And has an innovative way of doing this, ready for 8 June.

The Stick It To The Tories merchandise campaign was founded in 2013, in and around Pembrokeshire in Wales. It came about after local members of the People’s Assembly realised just how difficult rural political campaigning could be. So, they decided to move online and try and do something on a national level. And as co-Founder Jim Scott told The Canary, it quickly went from a dream to a reality:

Due to the large geographical nature of Pembrokeshire people were having to drive for, like, an hour just to have meetings. So, this made it very difficult to keep the group together and we kind of fizzled out. It became apparent that organising online was very easy whereas having actual meetings was not. At a meeting we held in 2015 (where not many people turned up) we brainstormed for things we could do online that would have a large effect, even at a national level. And so, Stick it to the Tories was born! The added beauty of the idea was that it could all be done online and from home, for instance when we set up the project we had me in Pembrokeshire, Jon our Printer/Designer in Ceredigion and Martin our web guy was up in North Wales but it worked like a dream. We only actually physically met once I think…!

After its launch in 2015, Stick It To The Tories had immediate success. One of its first, and still its most successful campaign was Choose the Tories or the NHS. You can’t have both: 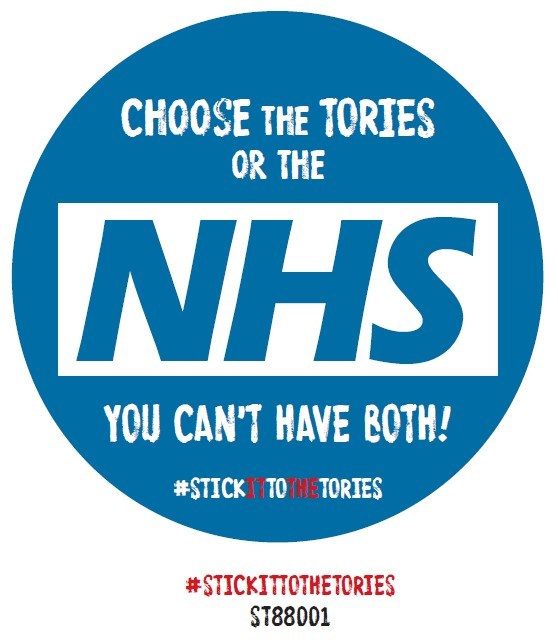 Scott said of the campaign:

A fellow activist friend of ours came up with the idea and it has been our best seller ever since. I guess this shows that the NHS is one of, if not the top issue to people especially in England; here in Wales the NHS is devolved to Welsh government but still suffering heavily from Westminster cuts. Anyone who is remotely aware, knows that the NHS is being sold off by the Tories, systematically privatized and that services will suffer terribly as a result, I guess that is why the sticker is so popular as Bevan famously said, ‘The NHS will last as long as there are folk left with faith to fight for it’.

And its latest stickers for the general election continue with the theme of poking fun, while making a serious point: 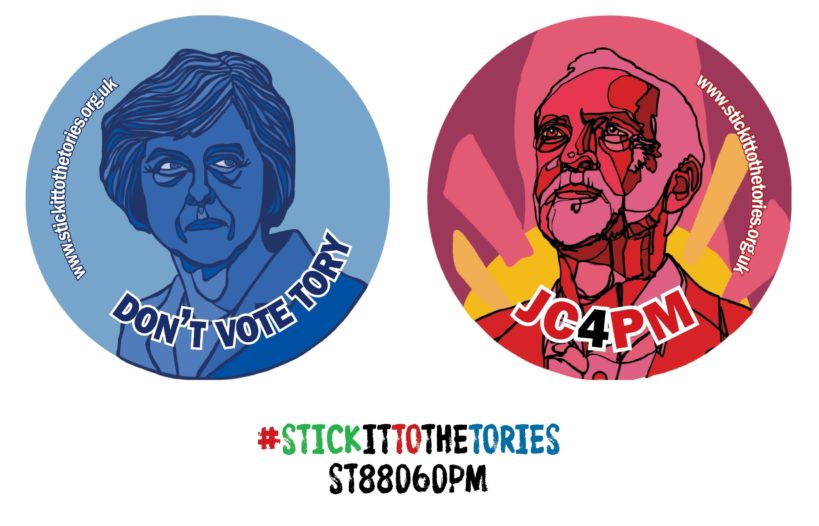 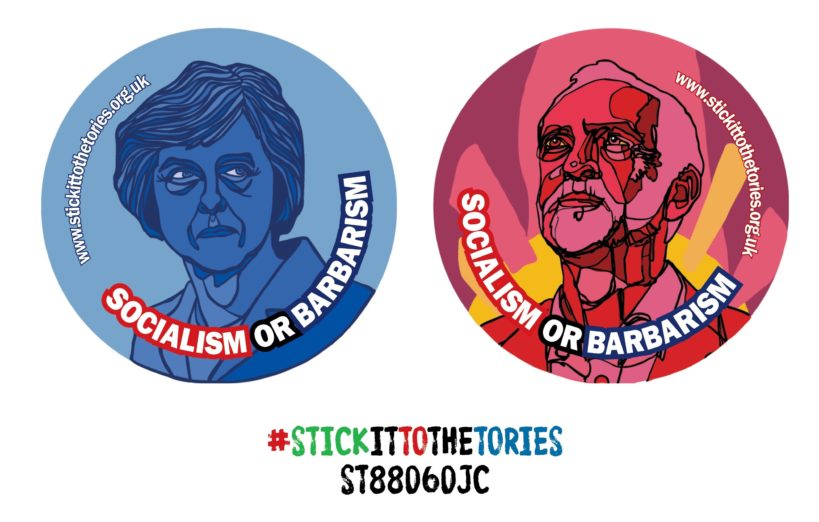 You can browse the general election-themed stickers here. The campaign’s other major success is in numbers. Since it launched, the group says over 100,000 people have bought stickers or badges.

In with the old

To some, stickers and badges may seem like a very traditional way of campaigning in the new world of social media and activism. But Scott believes there is still a place for this Stick It To The Tories style of campaigning. He says that the campaign and social media can work together in “a kind of beautiful, symbiotic relationship or synergy”:

The main focus or reason for Stick it to the Tories is that it exists out there in the real world, beyond the echo chambers of social media. The whole idea is that we take our messages out onto the streets and into the psyches of everyday people and disrupt the establishment narrative. This is more important than ever right now, because we have a grossly biased media in Britain. The reason it works so well though is because we can reach so many people via social media who then go and buy our stickers and badges.

Scott noted the amount of political Facebook groups that exist, sometimes with tens of thousands of members, as being significant in the group’s success. He often posts new badge designs into these pages, and says:

Within 24 hours the new design has been seen by tens of thousands of people and shared all over the place and orders come rolling in… I guess it merges a traditional form of activism with the added tendrils social media brings, it’s a win-win…!

Stick It To The Tories is entirely not-for-profit. And it doesn’t just work with its own ideas. Because the campaign is currently collaborating with DPAC, the disabled people’s rights campaign group. Its sticker encourages people to register to vote before 22 May deadline and also to #TrashTheTories as part of the group’s ongoing fight against government cuts to disabled people’s support. And Scott said collaborating with DPAC is about more than just stickers:

Working together with other groups like DPAC is so important right now if we want to defeat the Tories. The Greens, Labour and all left of centre parties need to align their messaging against the Tories for one last push to get them out; another great DPAC hashtag linked to that is #ToryDump. It’s vital that we all work together wherever we can, combine forces put on cross-campaign, cross-party demos like this one we have planned in Pembrokeshire, again to expose the poverty and deaths caused by vicious and ideological Tory cuts.

And the sticker campaign for DPAC is both effective and eye-catching: 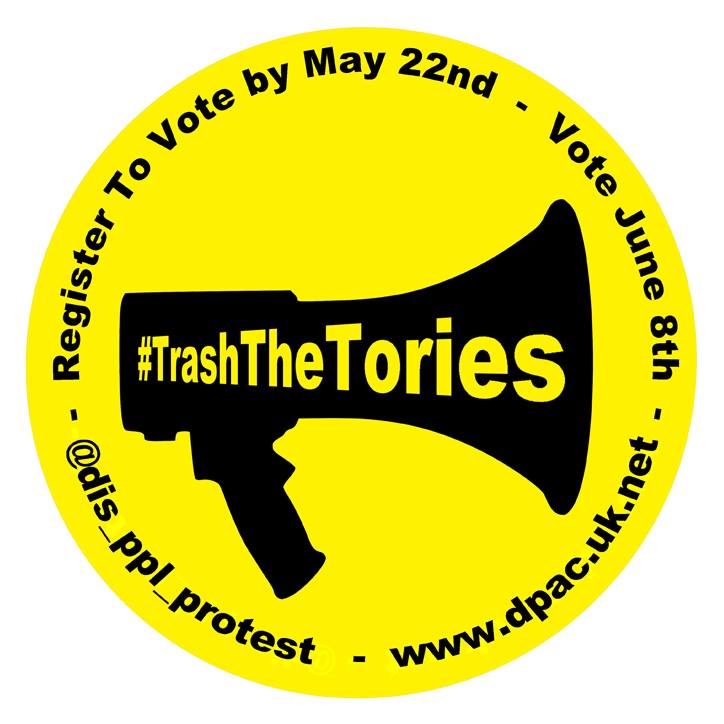 The DPAC sticker is here.

And what do the Tories think?

The Canary asked Scott if he’d had any feedback from Tories about the group’s campaign. Laughing, he said:

They don’t like it much! But they try to ignore it or pass it off as silly or infantile. At least that’s the impression I get from the very few Tories that I’ve had to interact with on various local political discussion groups. Saying that, we did get the heckles up of my local MP Stephen Crabb. We made a sticker themed ‘Crabb the grab – RESIGN Mencap’ after I had set up the petition for him to resign as a Mencap patron following his vote to cut disabled people’s support by £30 per week.

Anyway, about a year later we also worked with the local WAPSI group to design them a sticker for a demo they were putting on outside his office where he had agreed to a meeting. Apparently, they got an email from Crabb before the demo saying that he had heard Stick It To The Tories and Pembrokeshire People’s Assembly was involved with the demo and wanted to move it to the leisure centre up the road! So, I guess we must be doing something right – hey?

Stick it on 8 June

But the campaign group also plans to involve itself in some more direct action. Scott explained:

In our constituency where Tory Crabb is weak, the Greens have decided to stand down to give Labour a free run at him, so we came up with this crazy idea to take an ‘Elephant in the room‘ to all of Crabb’s hustings over the next few weeks and adorn it with Tory facts like homelessness figures, child poverty, disability deaths and so on. We will use this to gain local press coverage and get the information out there about what is really happening to people under this Tory government. Again, people just love creative activism like this. Everyone should be doing mad stuff like this to shine a light on Tory policies. Let’s make a fucking pantomime out of their election!

And it seems Stick It To The Tories are doing a lot of things right. With over 100,000 people reached, its visual messaging and wry, yet though-provoking approach, works. And so it may well change a few people’s minds about voting Conservative and succeed in getting them to ‘stick it to the Tories’ on 8 June.

– Also read more Canary articles on the 2017 general election. And follow Stick It To The Tories on Facebook.

Featured image via Stick It To The Tories